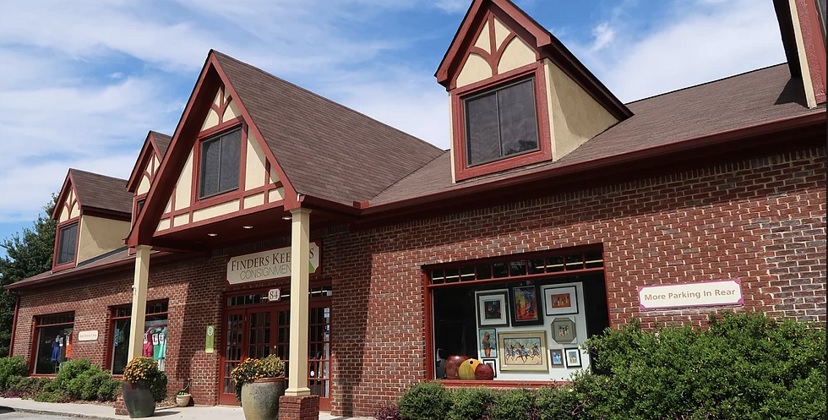 A photo of the Finders Keepers Building, which is being purchased by the Avondale Estates Downtown Development Authority. Photo obtained via exploreavondale.org

Avondale Estates’ Downtown Development Authority has voted to spend $1.4 million to add 60 to 80 free parking spaces to the city’s downtown.

The DDA approved the purchase at is Nov. 13 meeting, buying the buildings that currently house Finders Keepers, a consignment store, and Edwin Jarvis, a co-working space.

Under the terms of the agreement, Finders Keepers and Edwin Jarvis would become the DDA’s tenants and the lease revenue would pay off the debt for the purchase.

The owner of Edwin Jarvis, Allen Kim, serves on the DDA board and had to recuse himself from the discussions about the purchase and the vote to purchase the property. Prior to the DDA’s acquisition, Kim leased his space from Parke Kallenberg and Bonnie Kallenberg, the owner of Finder’s Keepers. Sam Collier, the DDA vice chair, said Kim would continue to pay a market rate for his space.

The lot will be located between four acres on North Avondale Road that the city owns and is planning to turn into a town green space and the Tudor Village, located at 106 N Avondale Road.

“The parking lot being acquired is behind two businesses and in front of the small city parking lot at Lake and Franklin Streets,” a press release from the DDA says. “The businesses will retain their dedicated parking in front and have access to a greatly improved lot behind.”

Collier said the property has been underutilized in its current state.

“Since the city owns the part adjacent to Edwin Jarvis, it’s been almost unusable because it’s been fenced off,” he said.

Second Century Avondale, a local civic group that is focused on designing the city in a way that reflects its long-range planning, praised the purchase.

“We are happy to pass along some exciting news that was shared at last night’s DDA meeting: The DDA has negotiated the purchase of the property on 278 that includes the original Finders Keepers building and Edwin Jarvis,” an email from the group says. “The purchase price was noted as $1.4 million with $100,000 down. Leases for Finders Keepers and Edwin Jarvis will remain in place and cover costs of financing and maintenance. The DDA intends to create a public parking lot behind the existing buildings. There was also a discussion of developing a lighted walkway to North Avondale Road. This property is adjacent to the city-owned 4-acres, so we are especially excited to see the city use this property to help realize our collective vision for a vibrant downtown.”

The move comes as Decatur is struggling with its own parking woes.

Free parking in Decatur is becoming harder to find. Souper Jenny recently announced plans to relocate due to a lack of parking. It’s not the first business to do so. Twist ‘n’ Scoot left the city in 2014 for the same reason. When Sawicki’s Meat Seafood & More left the city in 2016, parking was a factor in that decision.

Decatur has a combination of metered on-street parking and paid lots. Some local businesses validate parking at nearby parking decks. Aggressive booting at free lots that serve businesses in downtown Decatur has deterred people who would use them to park and walk to other businesses in downtown Decatur. The booting became so aggressive that the Decatur City Commission in 2016 had to step in and pass new regulations to curtail some of the more predatory parking enforcement practices.

The Decatur City Commission recently approved a parking management agreement with SP Plus Corporation as part of a plan to increase the cost of on-street parking to $3 an hour and extend enforcement hours.

Under the proposed changes, parking will be $3 an hour from 8 a.m. to 6 p.m. Monday through Saturday. The city also will enforce the two hour parking limit after 6 p.m., a city budget document says. That means if you park at 5:30 p.m. and stay until 8:30 p.m., you are in violation of the two hour limit and will receive a parking ticket. The fine for exceeding the two hour limit is $25.

Decatur Assistant City Manager Lyn Menne has said the goal of increasing the rates isn’t to punish people or generate more money for the city.

“It’s about encouraging and making sure we have parking spaces available,” she said.