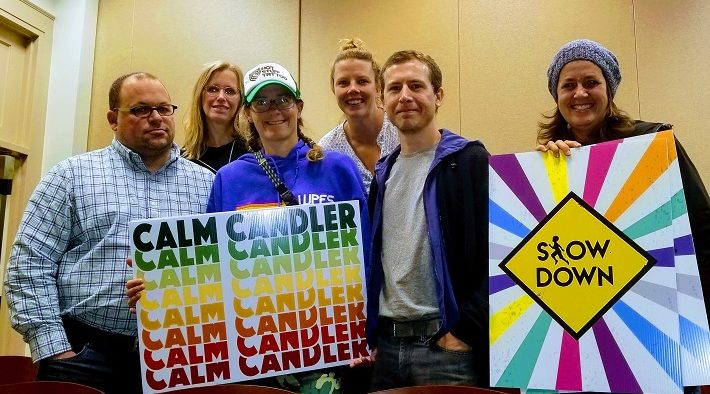 “We have all had so many near misses, with drivers who run red lights, with illegal passing, not stopping at crosswalks. My own daughter on Friday was nearly hit by a car,” Tonio Andrade, the parent who presented the petition said. “We know that you have already done a lot to improve the safety along this street, but there is still the basic problem – and that is the high speed.”

Several car accidents in recent months have drawn increased attention to issues with the road and prompted renewed calls from residents for the city to do more to improve safety for residents who live along the road and the pedestrians – many City Schools of Decatur students and Agnes Scott students – who walk there daily.

A key obstacle to the city’s effort is that South Candler Street is a state route, GA-155, controlled by the Georgia Department of Transportation. The city cannot make any structural changes to the road – such as speed tables, pedestrian islands or even reducing the overall speed limit – without the permission of GDOT.

Even so, there are some things the city can do on its own that would help, said April Biagioni, another parent speaking in support of the petition.

These would include extending the 25-mph school zone along South Candler to include The Hirsch Academy, a private school serving students with special needs. To help protect Hirsch students, the zone could be extended past Kirk Road. Improved signage to make drivers aware they are traveling in a school zone in that area is also needed. And citations can and should be written for the multitude of drivers who drive with their cellphones in hand and those who don’t stop behind the white lines at traffic lights and crosswalks, she added.

“It’s not just adding lights and things that cost a lot of money,” she said.

City commissioners can also urge GDOT to conduct a new study of traffic speeds on South Candler to determine the appropriate speed limit, said Andrade. Currently, GDOT uses an operational methodology that only references the current observed average speed of drivers on a given road. A more appropriate, risk-based methodology would evaluate the topography, pedestrian usage, nearby schools and businesses, and number of driveways to determine a speed that would best protect all users of the road – pedestrians and drivers.

Although the commissioners did not take official action regarding the petition on Monday, all present agreed that they shared the residents’ concerns—many relating their own experiences with dangerous drivers—and pledged to step up efforts to work the with state to improve safety in that area.

Mayor Patti Garrett said that the commissioners would take the recommendations in the petition to city staff to see which might be able to be implemented. And the city would continue to work with the Department of Transportation to make changes to the road.

●       Commissioners voted unanimously (with District 2 Commissioner Brian Smith absent) to approve a new alcoholic beverage license for Hannelore DeRoover, the owner of Java Monkey coffee shop. Because the store changed ownership, the new owner was required to go through the process — including a background check — of applying for a new license. Java Monkey may now resume selling wine and beer.

●       Commissioners unanimously approved an agreement with Pond and Co., in an amount not to exceed $23,325, for professional engineering services to design intersection and traffic signal improvements at the Talley Street / Shadowmoor Drive / South Columbia Drive intersection. The improvements will include a leading pedestrian crossing interval at the traffic signal, new curb ramps and crosswalks, left turn lane and protected/permitted phase of the traffic signal on southbound South Columbia Drive, rebuilding of the northbound right-turn curb radius onto Talley Street, and sidewalk extensions on Shadowmoor Drive.

●       Commissioners voted unanimously to approve a contract, with a budget not to exceed $50,000, with Georgia Safe Sidewalks for sidewalk repair.