City Schools of Decatur names its Teacher of the Year

City Schools of Decatur names its Teacher of the Year 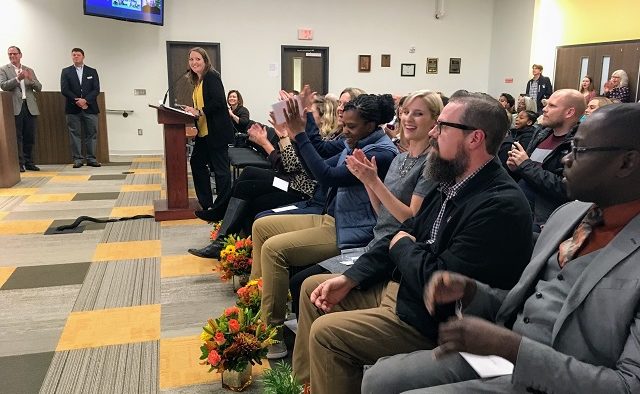 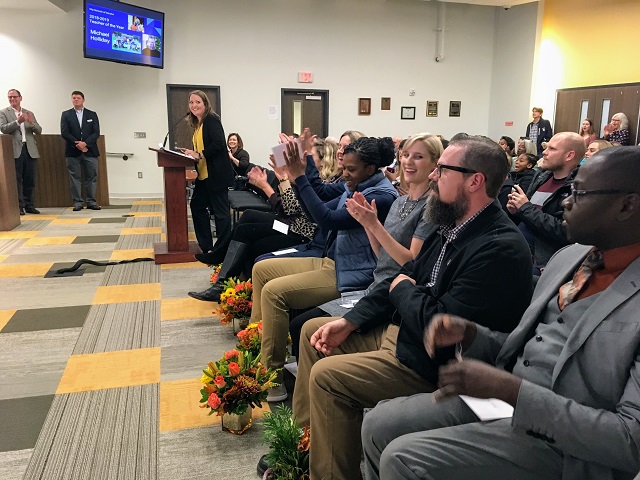 Michael Holliday, the man with a long beard seated in the front row, listens as he is named City Schools of Decatur’s Teacher of the Year during the School Board’s Nov. 13 meeting. Photo by Sara Amis.

At its November 13, 2018 meeting the City Schools of Decatur Board of Education recognized school-level Teachers of the Year for 2018-2019, and announced the system-wide Teacher of the Year.

School-level Teachers of the Year were nominated by their peers and had to have been employees of City Schools of Decatur for four years. They were Stacey Labouchere for College Heights Early Childhood Learning Center, Kelly Nichols for Clairemont Elementary, Amelia Copp for Glennwood Elementary, Malisa Henderson for Oakhurst Elementary, Latonya Henry for Westchester Elementary, Kate Woodbridge for Winnona Park Elementary, Michael Holliday for 4/5 Academy at Fifth Avenue, Johnnie Story for Renfroe Middle School, and Jennifer Gonzalez for Decatur High School. Each Teacher of the Year received a bouquet, a plaque, and a small honorarium.

The plaques, honorariums and flowers are sponsored by the Decatur Education Foundation.

Of his fourth grade students, Holliday said, “I love them because they’re still young enough to be super sweet, but developed enough that you can really have an honest dialogue with them.”

The meeting began with a moment of silence for Kennedy Segars, the Decatur High School graduate killed in a car accident last month.

In other business, the School Board again tabled changes to the policy manual which were presented at last month’s board meeting, to allow discussion of revisions.  The final draft may be read here.

The policy limiting public comment at Board of Education meetings to “District parents, students, residents, employees, businesses, and organizations” remains the same as the Oct. 9 draft.

The language about gender identity has been folded into Equitable Opportunity Regulations, 2. 24(b)(1), which now reads “to ensure the District complies with the letter and spirit of Title VI of the Civil Rights Act of 1964, Title IX of the Education Amendments of 1972, Title II of the Vocational Education Amendments of 1976, Section 504 of the Rehabilitation Act of 1973, and the Americans with Disabilities Act, and any related state or federal laws; and to ensure that all students are treated in a manner consistent with their  gender identity and to ensure that reasonable accommodations are provided to protect interests of all students.”

Board Chair Lewis Jones clarified at the Oct. 9 meeting that treating students according to their gender identity includes use of school facilities such as bathrooms.  Superintendent David Dude emphasized that the addition is not a change, but solidifies existing policy and practice in the school system.

“There’s no rush to get this done, so we can take the time to make the changes and receive public comment,” Superintendent David Dude said.