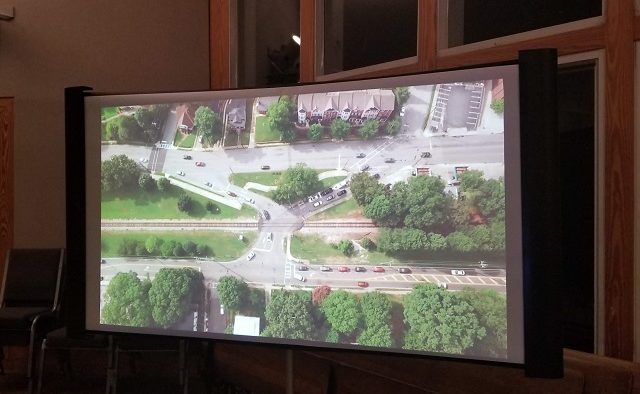 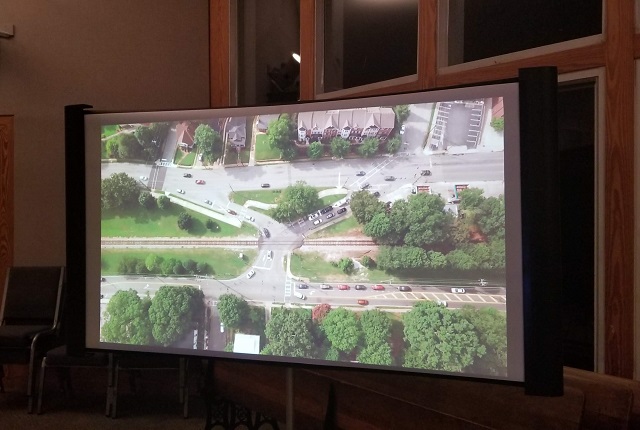 Video of traffic moving through the Atlanta Avenue rail crossing in Decatur shown at the community design workshop on Thursday, Nov. 15. Photo by Cathi Harris

Almost 70 people attended the first open house and workshop held to discuss changes to the road design of the railway crossing at Atlanta Avenue.

“We are very encouraged by the enthusiasm and the number of people who have come out to submit ideas,” he said.

The workshop is the first step in efforts to rework the complicated intersection. Participants were able to view a slideshow of information about the project that included drone shots of traffic proceeding through the area at different times of day and from different vantage points. They were then able to mark problem areas on printed aerial photos in one survey and suggest solutions and new design ideas in another.

In September, the city commission authorized borrowing $5.09 million to fund improvements to the rail crossing, with the debt to be repaid using proceeds from a sales tax approved by voters in 2017.

“We have enough money to do whatever we need to do, short of a bridge or a tunnel,” Saxon said.

The crossing is one of the trickiest traffic puzzles in the city, with small segments of Atlanta Avenue and Adair Avenue crossing busy West Howard Avenue and then immediately meeting in a ‘V’ just north of the track. Each segment has a separate traffic signal allowing traffic to cross southbound to head east or west along College Avenue. Drivers coming east or west from College to Howard must navigate a confusing sequence of traffic lights and crossing signals.

Complicating the issue further, is the presence of a segment of the Stone Mountain PATH trail that runs parallel to the tracks along Howard and must cross both segments of Atlanta and Adair at that crossing. The crossing is also a designated Safe Route to School, but students must navigate several pedestrian crosswalks on Howard and College and the grade crossing to get to the 4/5 Academy at Fifth Avenue, Renfroe Middle School and Decatur High.

Any changes made will also have to go through layers of approval from both public and private entities. Howard Avenue is a county road and College Avenue is a state route. And, of course, CSX owns the railroad tracks and right-of-way.

The purpose of the meeting on Thursday was to get a broad range of input from residents, business owners, and people who commute through the area on what changes they would like to see, said Glynnis Nguyen, with Landis Evans Partners, the engineering firm contracted to develop the new design.

“We want people to tell us what the problems are and any solutions that they recommend, but also – not just solutions – improvements like public art, greenspace, landscape design – that they would like to see,” Nguyen said.

They will gather all of the input to guide options that will be presented in later workshops throughout the design phase, which is expected to take about a year. The next public workshop will be held in January or February.

Anyone who would like to submit suggestions but was unable to attend Thursday’s workshop submit responses online through Open City Hall until Dec. 7.