Emory University hosts panel to discuss the future of Atlanta

Emory University hosts panel to discuss the future of Atlanta 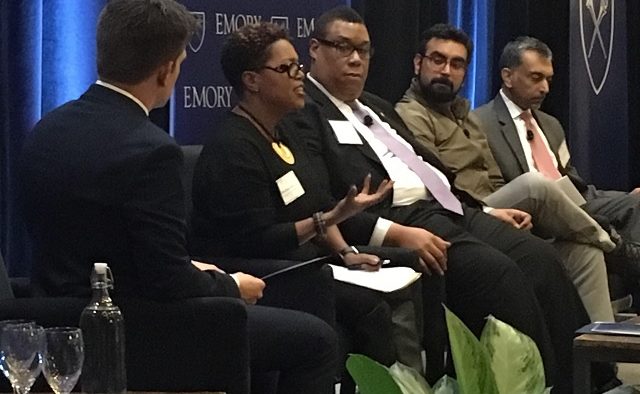 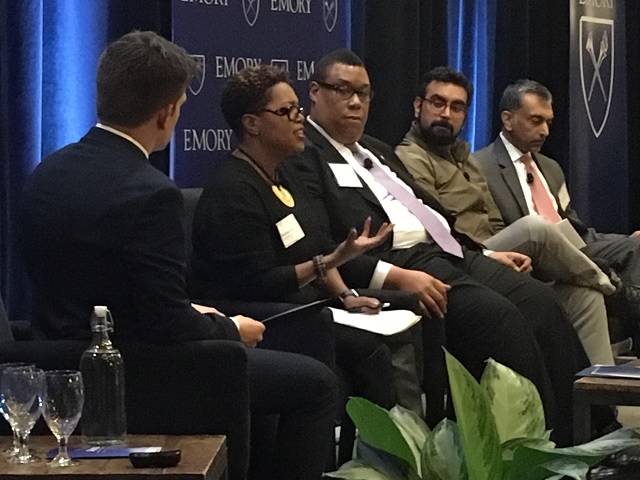 On Nov. 14, 2018, Emory University hosted “Exploring Atlanta: Inclusive Growth and Opportunities,” the first in a series of events that the university plans to hold on the future of economic development and work in Atlanta.

Mike Alexander of the Atlanta Regional Commission gave a presentation that covered the growth of the state of Georgia compared to other states since 1900, the growth of Atlanta compared to other cities since 1970, and recent trends in the Atlanta metro area. For new single family housing units, DeKalb County inside the perimeter was one of the high-growth areas in 2017 along with northwest Forsyth County and southeast Cobb. However, 80 percent of single-family new construction was inside the City of Atlanta. This represents a change from pre-recession patterns.

“We keep waiting for the exurbs to come back and they haven’t,” Alexander said.

The gap between rich and poor relative to other cities in the United States. widened during the recession, he said.

“We have a large poor population and we have a large wealthy population, and particularly coming out of the recession, we have underperformed in lifting those people out of poverty,” Alexander said. “On growth, we’re doing great, but if you start talking about inclusion, not so good.”

Community differences on the local level can shape the future of children who grow up in those communities, as measured by the Opportunity Index. Alexander said, “If you grow up on the south side of Atlanta, your future income is going to be dramatically less.”

“I live in southwest Decatur,” Alexander said. “For a black child born in 1980, if you look at this census tract in Oakhurst, our neighborhood, their average income would be about $20,000. For a white child born at the same time, your future income would be $60,000.”

Tim Keane spoke about the Atlanta City Design released September 2017, and emphasized that city planning is “more than just a series of developments” but should include identity and what makes a city unique.

Keane said, “Ryan Breville who was brought in to manage this project suggested that we frame the concepts and the principles within the design around Dr. Martin Luther King’s aspiration to the Beloved Community.”

Panel members weighed in on income inequality, gentrification, Atlanta’s identity, and the respective roles of private and public entities in economic growth and development

When asked what investors are looking for in a community, Ambrish Baisiwala said that, “there are clear winners and losers” and that the most important considerations are Infrastructure, availability of talent, and quality of life.

“When we are looking at the cities that we want to do business in, those are the three things we look for,” Baisiwala said.

Bentina Terry said, “There’s that kind of classic economic development that people think about, sites and buildings and all the analysis you do to figure out where you want to land a property, but the reality is that all of that means nothing if the people who you need to come and work in those jobs, the people in all of the communities around metro Atlanta, aren’t able to actually get to those jobs and be successful in those jobs.”

She added, “We can’t pick up and move. The future of our community is the future of Georgia Power.”

Rohit Malhotra said, “We’ve left way too many people behind in the way that we think about economies. We trick people. Institutions have inherently failed people.”

He added, “There’s a lot of data and I’m glad we have it, but this is a human problem.”

He pointed out the importance of culture, not only as a consideration in economic development and design but as an economic force.

Malhotra also said that expecting philanthropy to take up the slack on education or criminal justice reform, “is exactly why we’re in this problem in the first place. We view social issues as an externality in our economy.”

But Taylor highlighted its position as a black Mecca.

“For a lot of African Americans, Atlanta is a place that they can come to if they want to work hard and get ahead,” Taylor said. “People of color around the country see Atlanta as a city of opportunity.”

He pointed to the future conversion of the Atlanta City Jail into a help center, “with wrap-around services to really allow you to make a change in your life,” as a project with tremendous transformative potential.

“It will take a public-private partnership to get something like that done,” he said.

Baisiwala warned about the inevitability of a market correction, and expressed concern that during Atlanta’s long period of growth people are being increasingly left behind.

Baisiwala said, “The fact that we’ve had the longest expansional economy, and we actually have greater income equality and less people who participate in that growth, if it doesn’t get better right now, when does it get better?”

When asked later about how Decatur fits into the bigger regional picture, Mike Alexander mentioned the school system.

“If you look at any measure of achievement, or a comparison of schools, Decatur is highly regarded,” he said. “Anyone who lives in Decatur knows how that has impacted the price of their homes. The market has changed dramatically since I’ve lived there, and as residents we do worry about what that means.

“I think that as a community Decatur is working hard to make sure that it can be a place that has diversity of income and be successful with the school system. There’s a lot of great effort put into that. But Decatur does highlight this situation that housing prices are not affordable to the average household right now. We know that. If you talk to any of our elected officials in Decatur, they are concerned.”

“These issues first and foremost come down to wage,” Malhotra said. “I think at the end of the day, poor people want to make more money. We just don’t pay people well.”

He thinks no one should be shocked that low wages results in people being displaced from neighborhoods or unable to find affordable housing.

“When the cost of living is rising at an exponentially higher rate than your wage, that’s something that we need to take a lot more seriously. I think that’s the greatest form of corporate social responsibility that we could ask for,” he said.

Additionally, Malhotra said that investing in local existing businesses and making sure that people have a say in how their neighborhoods are constructed will reduce displacement.

“Cities are going to change. People assume that people who are poor hate change in their cities, but that’s not true at all,” he added. “They just want to be able to participate in the economy that we are building.”