On election night in Decatur, voters shared their stories while waiting for the results

On election night in Decatur, voters shared their stories while waiting for the results 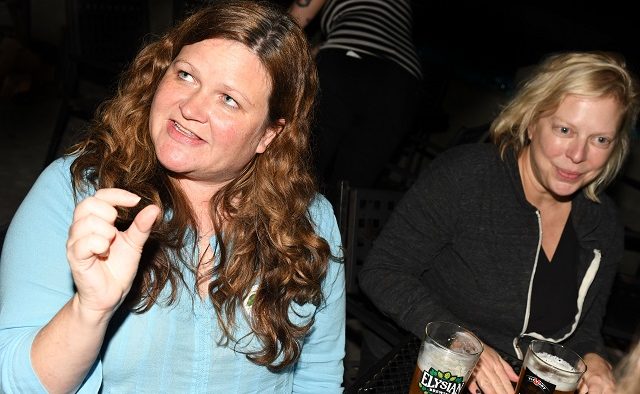 (left to right) Heather Sharp, of Decatur, and Liz Marvel, of Kirkwood, both support Stacey Abrams. They attended a watch party at The Imperial in Decatur on Tuesday, Nov. 6 2018. (Photo by Rebecca Breyer)
Share 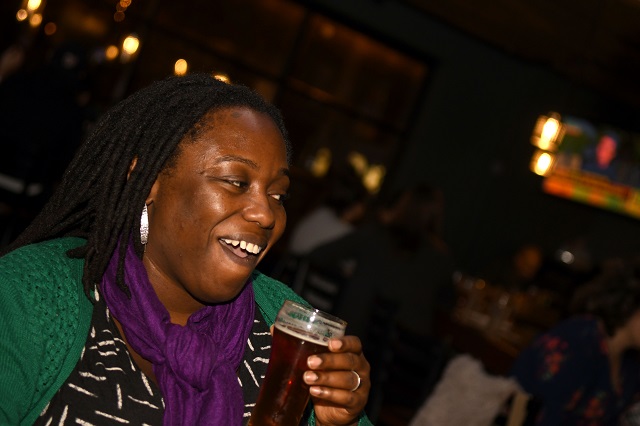 Kirkwood and First Christian Church on West Ponce had long lines, while voters in East Lake and Belvedere Park got in and out quickly.

Janet McNichol tried to vote early and left because of the long line but found no line at her regular precinct in Druid Hills on Nov. 6.  Liz Marvel said that she voted early and had no trouble but took water and snacks to people at the DeFoor Center who were waiting in line for hours to vote.

“It was very hot in there, and there was no AC,” Marvel said. 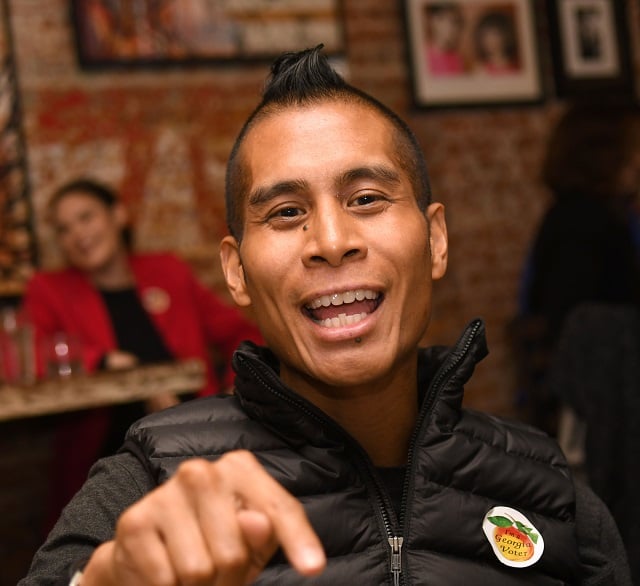 Chris Aquino, of Decatur, supports Stacey Abrams. He attended a watch party at The Imperial in Decatur on Tuesday, Nov. 6, 2018. (Photo by Rebecca Breyer)

Everyone interviewed by Decaturish voted for Stacey Abrams for governor. Abrams was behind Secretary of State Brian Kemp as election night drew to a close but as of Wednesday morning, Nov. 7, had not conceded, citing outstanding votes that had not been counted.

“I can see myself in her,” said Sharon Caslin.

“I just think she’s a really smart, grounded, qualified candidate with policies that make sense,” Marvel said. “I don’t think Brian Kemp is qualified or capable of being governor.”

Don Martin at Twain’s said, “For me it was a vote against Trump and a vote against Brian Kemp. I’m a progressive, so Stacey Abrams’ policies are certainly in line with what I believe, but the intensity of my motivation was anti-Trump.”

His son Josh agreed, saying, “If I could vote neon blue, I would.”

He added, “I vote in as many elections as I can. This works from the ground up. The real stuff happens at the local level.” 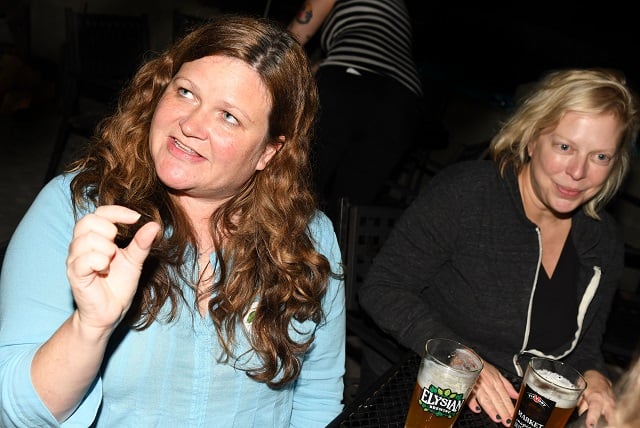 (left to right) Heather Sharp, of Decatur, and Liz Marvel, of Kirkwood, both support Stacey Abrams. They attended a watch party at The Imperial in Decatur on Tuesday, Nov. 6 2018. (Photo by Rebecca Breyer)

Several people like Chris and Angela Aquino emphasized that they voted down the ballot for “all the Democrats.”

Chris added, “But I pressed extra hard for John Lewis and Stacey Abrams.”  Of Abrams, he says, “She seems like she’s working towards something better.”

While Sharon Caslin said that her main focus was the Georgia gubernatorial race, several others mentioned the importance of the national midterms and local races.

“I think it’s exciting that there are so many people who have never voted before, and especially are taking notice and care about the local elections,” said Angela Aquino.

Jacoby Elrod at Thinking Man Tavern said he was curious to see how the ballot measures turned out, state-wide as well as the local early alcohol sales question. 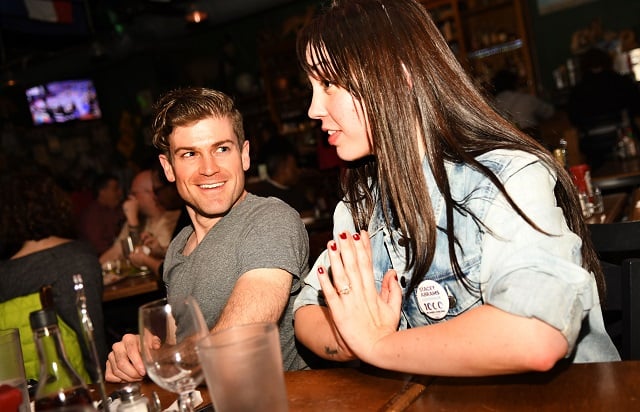 (left to right) Jacoby Elrod, of Grant Park, and Anna Sandy, of Grant Park, both support Stacey Abrams. They attended a watch party at Thinking Man Tavern in Decatur on Tuesday, Nov. 6, 2018. (By Rebecca Breyer)

“I think this election is pivotal,” said Chris Aquino.

She added, “I voted for Stacey Evans in the primary, but I thought it was important to show up and support Stacey Abrams, who obviously I support and admire.”

She went on to say that she was interested to see if Abrams theory about how a Democrat can win in Georgia would work.

“I think it’s important because there’s this real rise and thirst to have our representative democracy back,” said Kim Alford. “I’m also impressed because not just locally, but I think nationally, there are so many people running for something for the first time.”

“I think this is probably one of the most important elections, mid-term or presidential that this nation has faced in a long time,” said Don Martin. “I think we need to get this done now and start working towards 2020. Trump has really brought an… imbalance in the Force.”

“Isn’t that what they say in Star Wars? Trump has created an energy in this nation that is either going to be propelled forward by what happens today or resisted.” 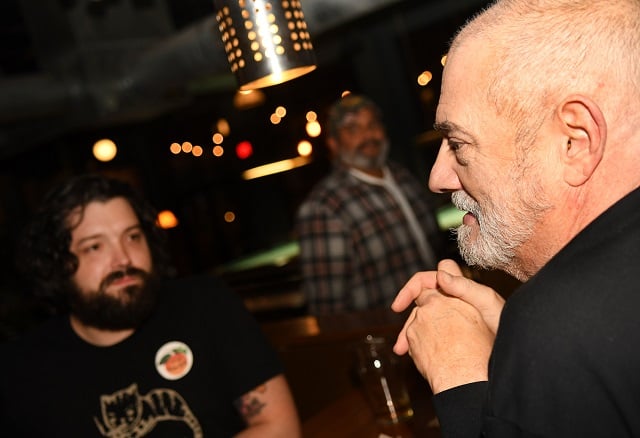 (left to right) Josh Martin and his dad, Don Martin, both of Decatur, support Stacey Abrams. They attended a watch party at Twain’s Brewpub & Billiards in Decatur on Tuesday, Nov. 6, 2018. (Photo by Rebecca Breyer)

He added, “I’ve also seen the importance of having election day as a Federal holiday. It has really been brought home to me that there’s a racial component to what is happening.”

At the Marlay House at 11:30 p.m., Democratic Public Service Commission candidate Lindy Miller said, “There’s no news. None of the big counties have reported in yet. We didn’t really expect to know until two or three in the morning.”

Miller acknowledged that many people don’t quite know what the Public Service Commission does, but she believes her campaign has helped to shine a light on it.

“My opponent said that only special interests care about this seat, but that’s not true if you take the time to talk to people about it,” she said. “When it’s their bills, they care.” 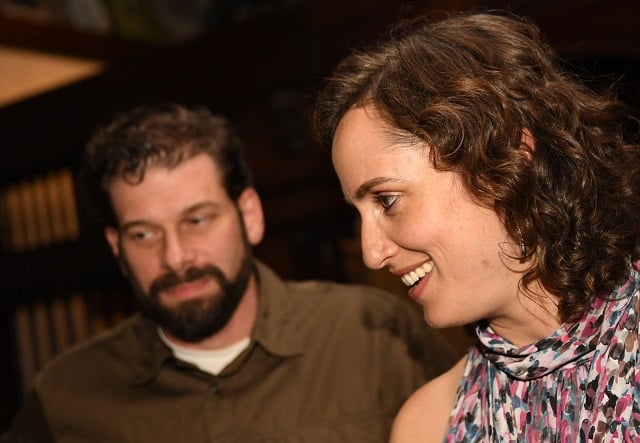 (left to right) Eytan Davidson, Miller’s head of communication, and Lindy Miller, who is running for public service commissioner, were at The Marlay House in Decatur on Tuesday, November 6, 2018. (Photo by Rebecca Breyer)