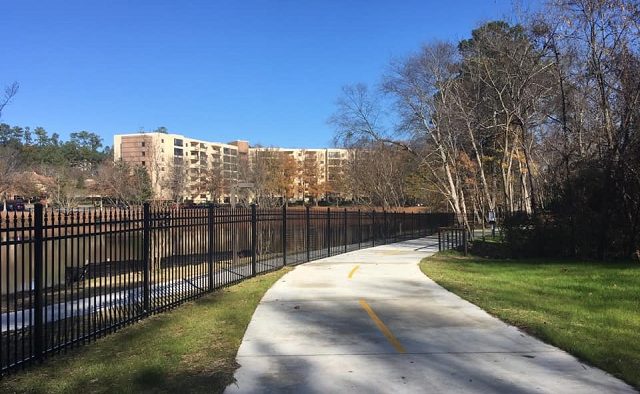 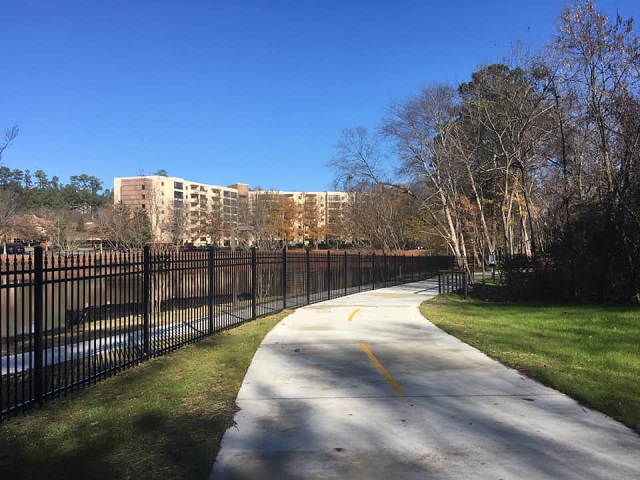 2. The PATH runs along Clairmont Lake, with Clairmont Place Senior Living pictured in the background. Photo by Heather Karellas

This new path routes pedestrians and cyclists from Emory’s Clairmont Campus safely underneath Clairmont Road and along Clairmont Lake before connecting directly to the scenic two-mile-long South Peachtree Creek Trail.

While the Emory Connector trail is new, the idea for its creation came about more than twenty years ago, in 1996.

The PATH Foundation, a nonprofit dedicated to developing public greenway trails such as this one, has dubbed the now-complete South Peachtree Creek Trail “a trail worth the wait.” It was completed in four phases, with the Emory Connector being the fourth and final phase. For many DeKalb County residents and bike commuters, the connector was a highly anticipated and welcomed project.

The Atlanta Bicycle Coalition was one organization out of many that were excited about this new trail.

Executive Director Rebecca Serna said, “This is a beautiful place to walk or bike. And the effect of the trail on the connecting neighborhoods can’t be overstated. Instead of sitting in traffic you can now walk or bike to Emory through the woods. It’s possible to see more squirrels than cars along the way.”

Decaturish also spoke about the new trail with John Steward, President of the Board for the Georgia Trails Alliance. Steward also works in Georgia State University’s School of Public Health. A major focus of his research is examining how transportation infrastructure can help promote the health of people in urban settings. He serves as Faculty Advisor for the student-led Panther Bikes program, which works to make GSU a more bicycle-and-pedestrian-friendly campus.

“To me, what [the new Emory Connector trail] demonstrates is the great opportunity our community has to develop trails that provide recreational benefit and provide health benefit by allowing people to get out, be physically active, and truly become part of the transportation system for our community,” Steward said. “It allows people an option to get out of their car and to walk or ride to destinations that they otherwise wouldn’t have considered. I think this is an outstanding example of the kind of direction that DeKalb County needs to pursue.”

Steward said he also personally enjoys bike commuting around the city. However, Atlanta’s busy streets can be intimidating even for skilled cyclists. A recent report from the Atlanta Regional Commission said, “the fear of being hit by a car or truck is a major barrier to getting more people to walk, bike, or take transit.”

This fear is not unfounded: the same report shows that roughly 90 pedestrians and cyclists in the Atlanta region are killed each year due to traffic crashes, and an additional 300 suffer life-threatening injuries by the same cause.

Steward said,  “I want to stay off busy streets as much as I can. Having that little connection finished along South Peachtree Creek is really a game-changer for me, because it allows me to stay off of Clairmont Road, which I’m not personally comfortable riding on as a cyclist, and then use the South Peachtree Creek trail to connect to North Druid Hills and a series of residential streets to get me home, while staying off most major streets.”

The new Emory Connector is a quality-of-life-enhancing project even for those who aren’t cyclists. On any given weekend, plenty of walkers, runners, and families can be found enjoying this scenic area. The path meanders alongside picturesque Clairmont Lake, where plenty of geese and ducks make their home.

Portions of the previously constructed South Peachtree Creek Trail also run alongside the path’s tranquil namesake, South Peachtree Creek. The area is particularly beautiful during the spring and fall, as plenty of trees with colorful fall foliage and spring blooms surround the path.

Unpaved side trails, some of which lead to colorful, graffiti-covered abandoned structures, provide opportunities for adventurous explorers to get off the beaten path. A new boardwalk section of the trail completed in 2017 can be accessed through Mason Mill Park and connects trail users to North Druid Hills Road. An interactive map of the entire trail system can be found here.

To access these trails, free parking is readily available at Mason Mill Park and Medlock Park. Free parking can also be found on Emory’s Clairmont Campus in the Starvine Deck after 5p.m. on weeknights as well as on weekends. From there, a short stroll connects residents to the network of paths.

By all accounts, the new Emory Connector is a positive improvement for the community that will allow for safer, more convenient bike commuting as well as enhanced opportunities for walking, running, and exploring by foot.

“One of the strong messages that we send to our public health students is that public health works best when it allows people to make the right choice…the easy choice, the default choice,” Steward said. “When you have the choice to get your shoes on or get on a bicycle and ride on a path you feel is safe and naturally beautiful, you’re much more likely to practice healthy behavior without even thinking about it.”

During this season of indulgence and holiday treats, the new Emory Connector provides a perfect opportunity for DeKalb residents to lace up their sneakers and get active.