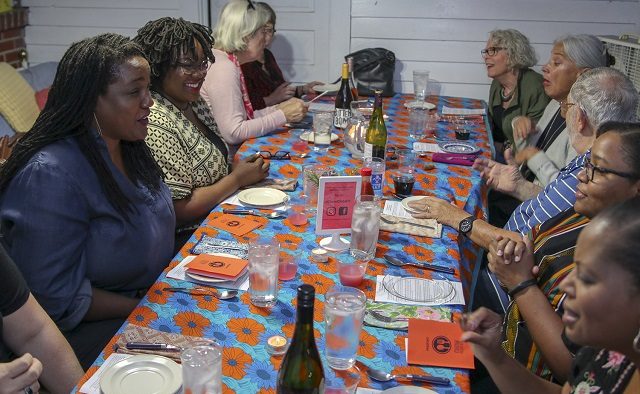 Plumb said, “It all started with asking Yohanna, ‘Where is the best place to get Ethiopian food in Atlanta?’”

Yohanna Solomon, an Ethiopian immigrant and co-founder of the club said, “My house.”

Thus, began a monthly “Chow Club.” Originally a small group of friends getting together to expand their culinary horizons, it has become a popular monthly attraction in the East Atlanta/Decatur area. It is seen not only as a place to try new food but a way for different people to meet in a community setting.

Chow Club started around February 2017 in its current form. It is a paid dinner, a community event, and a showcase for the culinary skills of many locals looking or have already started their own business in the food world. Sometimes it’s just a way of welcoming a new member to the community.

“When you are unsure how to make friends and integrate into a new community, many around the world look to food,” Solomon said. “It is nearly universal.”

Last year, a family had arrived as refugees from Syria, during the current presidential administration’s “immigration freeze.”

“[They] were feeling unwelcome with all the negative things going on in the news about immigration and refugees,” Solomon said. “Being able to make a dinner for those in their new community, watching the joy on the faces of the patrons…it was amazing.”

Other club members enjoy the opportunity to try new food and learn about different cultures.

“I’ve been very fortunate to be able to go to Chow Club every month since June 2018,” Tracy Tobin said. “It’s an amazing thing to be able to have a group of strangers come together and learn about different cultures through food in a such a welcoming environment. Amanda and Yohana have built something special, an experience where the world becomes a little smaller and more connected.

“It’s been wonderful, month after month, to have lively discussions and laughs with people from all different backgrounds over delicious dinners, and I can’t wait until the next one!”

Over the last two years, there has been a variety of dishes from around the world, including Burmese, Syrian, Ethiopian, and even good old American Cajun.

“Tickets go really quick now,” Plumb said. “We have more need of a larger space … than we have of getting the word out, it seems.”

Plumb said the Club does not advertise and relies on the community word-of-mouth, which appears to have paid off.

“I have been to Chow Club Atlanta eight times now,” Sarah Gregory said. “Why? Because it’s wonderful. Cuisines are from countries all over the world and presented in an authentic way by people actually from the country. As well as delicious food, I’ve had an opportunity to meet many interesting people—everyone from personal chefs to CDC scientists to a casting director!”

The menu is created ahead of time and can be done in two to seven servings, depending on the cuisine and the chef.

“When my mother did an Ethiopian night, she just kept adding to the menu,” Solomon said.  “She wanted to make sure her diners were getting all the authentic dishes she could conceivable make.”

You can reach the Atlanta Chow Club at chowclubatlanta.com.  Next month’s menu is Syrian, on the 11th and the 12th.

Correction: An earlier version of this story contained an incorrect date. This story has been updated with the correct information.