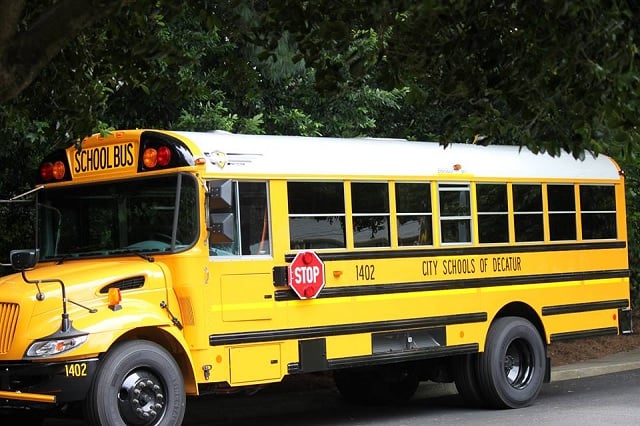 Here’s the full announcement from City Schools of Decatur:

Governor Deal announced state offices will have a delayed start tomorrow morning due to the possibility of icy road conditions in the morning. Out of an abundance of caution and awareness for the safety of our students and employees, City Schools of Decatur will operate on a two-hour delay tomorrow, Tuesday, December 11, 2018. Please use caution on roads and sidewalks.

•Schools will begin two hours later than usual. For example, Decatur High School usually begins at 8:30, but tomorrow DHS will start at 10:30.

•Staff start time will begin two hours later than usual. For example, 4/5 Academy at Fifth Avenue staff usually report at 7:15, but tomorrow they should report by 9:15.

•Dismissal times for all schools will remain the same as a normal day.

DeKalb County School District (DCSD) will open on a two-hour delay on Tuesday, December 11, 2018, due to the potential of inclement weather and black ice.

Due to the forecast for temperatures to fall below freezing early Tuesday morning with the potential for black ice, and in alignment with the Governor’s Office, Atlanta Public Schools will delay opening schools by two hours tomorrow as follows:

– Elementary Schools will open at 10 a.m.

– Transportation pick up times will be delayed two hours from normal pick up schedules. All dismissal times will remain the same. Schools that have alternative bell schedules should adhere to the two-hour delay.

APS Facilities staff should report at 9 a.m. APS District administrative offices are also on a two-hour delay and APS employees should report two hours later than their normal reporting time.

For APS charter schools, parents, caregivers and employees should contact their schools directly for scheduling information. APS will continue to closely monitor the weather conditions in coordination with the National Weather Service, city and state officials and other Metro Atlanta school districts. We encourage everyone to exercise caution when traveling throughout the metro area tomorrow.

DeKalb County government will also be operating on a two-hour delay. From the county:

DECATUR, Ga. – DeKalb officials are urging residents to exercise caution on the roads as there is potential for black ice on roads for Tuesday morning.

As a result of the potential inclement weather, DeKalb County government offices, libraries, senior centers and recreation centers will open at 10 a.m. Tuesday.

The DeKalb County Board of Commissioners’ meeting also will be delayed until 10 a.m.

County employees who are required by their supervisors to deal with the emergency conditions should report to work as normal.

All sanitation residential, commercial, transfer stations and landfill operations employees are to report to work as normal.

The DeKalb court system will not be delayed and will operate on its normal schedule.

Employees under the direction of elected officials other than DeKalb CEO Michael Thurmond should contact their supervisors about their work schedules.

The city of Atlanta is doing the same:

The City of Atlanta Government Offices will have a delayed start of 10:00 AM on Tuesday, December 11, 2018 due to a high potential for black ice on the roadways. Non-essential City of Atlanta employees are to report to their respective facilities at 10:00 AM. Please remain weather aware, and if you must drive in these conditions, remember to slow your speeds, acceleration, and braking.