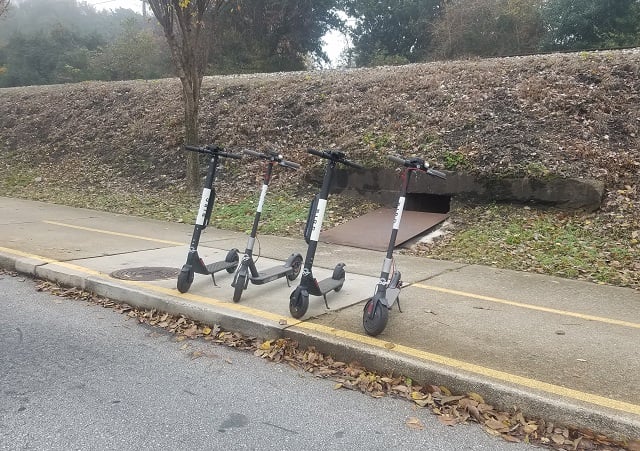 A quartet of Bird scooters improperly parked across a lane of the multi-use PATH near the Arlo. Photo credit: Ann Abramowitz.

They seemed to show up overnight – dropped onto city sidewalks like “caterpillars from the sky” in the words of one Decatur resident.

Dockless electric Birds – scooters that customers rent for 15 cents a minute and can leave anywhere when they are finished – have popped up all over the metro Atlanta area, bringing both excitement and controversy in their wake.

Atlanta’s City Council recently considered an ordinance that would limit where the scooters could be ridden and parked, following numerous reports of dangerous scootering, including one fearless soul riding on the Connector.

Proponents say that they are a good solution to the “last-mile problem,” a transportation planning term used to describe the most common gap between a person’s final destination and the nearest mass transit option.

Opponents say the e-scooter sharing companies, like Bird and its competitor, Lime, are irresponsibly endangering the public by dropping their vehicles in dense urban areas with little regard or oversight for the safety issues they present.

“I think that what we are seeing are the early issues that are common to any major change in the routine way of doing things,” said Scott Doyon, an Oakhurst resident and urban planning professional who describes himself as an occasional user of the scooters to get from his home to his office in downtown Decatur. “In many of the online discussions and coverage that I have seen, I keep seeing words like ‘nuisance’ and ‘menace’ and those are some of the exact same language that was used to oppose the presence of cars on roadways in the early part of the 20th century.”

Bird did not respond to requests from Decaturish for an interview or a statement regarding the scooters and Decatur.

Doyon is quick to say that he does not consider himself an advocate for the scooters or their use, and understands the concerns many have raised regarding them.

“I think that municipalities and governments will make the appropriate regulations and it will flesh it out even more,” he said. “Then, it will end up being a fad and disappear or it won’t.”

Decatur resident Ann Abramowitz, a professor of psychology at Emory University and a member of the Decatur Active Living Board’s pedestrian advisory committee, tends to fall more on the “nuisance and menace” side of the argument.

“They are everywhere, up and down the sidewalks. I see them parked more than I see anyone riding them,” she adds, noting their presence in her Ponce de Leon Heights neighborhood. “When I do see someone on one, they are almost always riding on the sidewalk and they are never wearing a helmet.”

She has reported the scooters more than once for blocking sidewalk access as well as blocking entire lanes of the multi-use path beside the railroad tracks.

She faults Bird (Lime and other companies do not currently have a presence in Decatur) for flooding their vehicles through the town without any discussion with city leaders and without restrictions to encourage their appropriate use.

“I know they say that you have to wear a helmet and to stay off sidewalks, but the fact remains that most people aren’t,” she says.

Even with the scooters restricted to a max speed of 15 miles per hour, a collision between a pedestrian and a rider could be deadly. And, cyclists using the path or people using wheelchairs on the sidewalk have to unexpectedly veer into traffic to avoid hitting the ones improperly parked.

Part of the issue with the Birds is the company’s hands-off business model, notes Richard Cohen, a fellow Decatur resident, also a member of the city’s pedestrian advisory committee, and the one who compared the Bird launch to the sudden emergence of the silk moth larvae in spring.

“They appear to have a very interesting business strategy – I am not going to call it a good one – but it is bold,” he says. “They just drop the scooters in a particular place, facilitate their use. Then, when the [city] leaders try to put limits or regulation in place, they face opposition because the product is already established.”

They have placed the onus on the individual communities to do the work of figuring out how to safely integrate the scooters and police their use, interacting with a loosely organized group of independent Bird contractors – via the smartphone app – to report problems and request changes.

For example, the scooters are collected each evening by a group of independent “chargers” who are compensated by the company on a per-charge basis. The chargers are then responsible for distributing the scooters around to designated areas, known as Bird Nests, the next day.

“Bird hunting” has become a popular income stream for high-school and college students here and across the country. But some areas have reported problems with chargers hoarding the scooters, hiding the scooters, or getting into disputes with other chargers over who can claim a particular scooter.

If scooters are improperly parked or left in unauthorized locations, this can be reported through the app or the company’s website. They will send someone – exactly who is not clear – to take care of the problem.

Despite the furor, Oakhurst’s Doyon says it is unlikely that Decatur will see the same magnitude of issues that have cropped up in Atlanta and elsewhere, since its smaller size and relative lack of appropriate infrastructure makes Bird use less practical.

“I use one if I am walking home from work and see it along the way,” he says. “But it is much less likely I would see one in my neighborhood when I need to go back. It’s different than, say, Midtown, where there is a higher density and a likelihood that a scooter would be available nearby.”

Bird is reportedly pilot testing a plan to drop off scooters at riders’ homes by request, but this feature has not rolled out to Atlanta, let alone its smaller neighbor.

Doyon also says that the proximity of the multi-use path near the tracks and the Arlo make it doable for his commute, but, for the majority of Decatur residents, it might not be.

“In the areas where we have the infrastructure, like the path and bike lanes, it will work,” he says. “In other areas, I don’t see this as a good option. There are some places where they have put the scooters that almost necessitate them being ridden on the sidewalk and that is not good.”

Abramowitz also casts doubt on claims that scooter sharing can reduce car use.

“I have read that the average scooter trip is less than 2 miles, so, for Decatur, this is really not getting people who would drive anywhere to get out of the car,” she says. “It is more likely that we are encouraging them to ride somewhere when they could be walking.”

Decatur’s Active Living Advisory Board has been discussing the issue at recent meetings, but has not settled on a proposed solution, yet, says Cheryl Burnette, the city’s Assistant Director of Active Living. They are working with the city manager’s office and department of public safety to develop an appropriate response.

“The Active Living Board is proactively discussing how the scooters affect public safety,” she said.