Decatur dad is a successful voice over professional

Decatur dad is a successful voice over professional 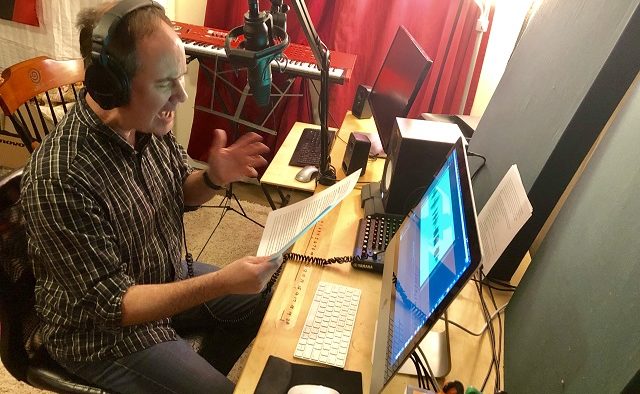 Lance Blair, a local voice over professional, records voice overs for a client from his in-home studio. Photo by Gabriel Owens
Share

If you saw Lance Blair from a distance you wouldn’t expect the kind of rumbling deep-sound he can create. You might not even be able to tell when actually talking to him, looking at his medium frame, and hearing his regular conversational tone, which is normal, and quite pleasant.

So, watching him behind the mic in his home studio, belting out important safety instructions for a nuclear power plant (deep and professional, the kind of voice that you listen to), is quite fascinating.

Blair has been around the media, music and broadcasting worlds since his teenage years.  It’s little surprise where his career path would take him, even from an early stage.

“As a kid I was always into recording and music and things,” Blair said.  “I was the kid that would have four tape recorders and record on one and then play it on a second one, and so forth.”

Blair described the process as a real primitive version of sound design, creating layers like a real radio show.

“You know, home radio shows with my pals and stuff,” he said. “We would play the content of the music while we’re talking, pretending it’s all live and things like that. I always loved radio and growing up in Boston, there was great local radio content.  I’d listen to radio shows in the 80s with guys like Emperor Hudson that really sounded like 1930/1940s radio shows. I loved that stuff.”

Here’s is an example of Blair’s work:

By high school, his love for music and recording would find him “with the theater geeks and thespians…someone had to do sound and I always seemed ‘it’,” Blair said.  He was also in a punk band where he sang and played bass.

“I was using my voice along with sound engineering early on,” he said.

While attending St. Andrews University, where he continued to work sound for theater and media, he got the chance to spend a semester in Scotland at St. Andrew’s sister school.  “I think it was a great opportunity to understand more about the world than [just being in Boston].”

During the end of college, his experiences home and abroad in sound and music led him to working at Cramer productions in Boston, Mass., a company that does TV corporate events, among other media productions.

“Everything from puppetry to documentaries for TV,” Blair said.  “My first day as an intern I recorded voice overs, so I got into it right away and learned from the actual talents and what they were doing.”

Despite working in different areas of media and broadcasting, it was clear where Blair’s path was headed

“One of the responsibilities I had was to help the producers with casting,” Blair said. “So was my job to take all the reels of all the voice-over people and go through them for different projects, so I was already a voiceover snob [from the beginning.] Just being all judgmental, ‘he’s no good; he’s good; we should probably cast her for this; and so on. It really got me to understand what the producers and the directors want, and what they’re looking for. I think that was really helpful.”

After working at various media places in Atlanta including Turner for a few years, Blair would go freelance full-time in voice over/voice acting, building a home studio and doing most of his work from the house.

“It’s an interesting gig,” Blair said.  “One day you’re recording [in English] for a Polish tool company, the next you’re voice-acting in ‘triple-a’ video games.”

His neighbors have a chance to hear him practicing his craft.

“It’s really amazing to hear Lance’s work,” said neighbor and fellow work-from-home professional Wendy Pruitt.  “Sometimes you can’t even recognize his voice! He has an ear for the details…it’s one of the reasons he can do this work from home. He can hear any imperfection and correct for it. His clients would never know that he’s working from his home in an urban area. In fact, I’m pretty sure people think he is in a big-time studio. “

Watching Lance work in his home studio is impressive, as he sits down in front of a mic and suddenly, his eyes widen, his voice deepens, and a very well enunciated other person comes out of his mouth.

After a few tweaks in an audio program, he sounds almost unrecognizable from his speaking voice.

“I can do highs and mids too, but most of my clients seem to like my lows,” Blair said.

Lance Blair lives with his wife Marla, a corporate writer, and his middle-school aged daughter Ruby, right off Ponce near the Square.  You can reach him at www.lanceblairvo.com.