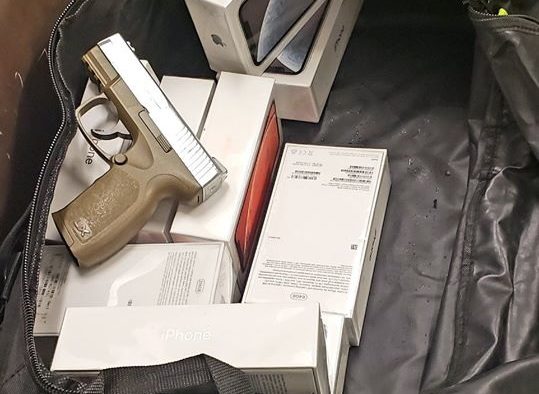 The Decatur Police Department says it has made an arrest in an armed robbery of a Sprint store that occurred Friday morning.

Police accuse him of entering the Sprint store in the 400 block of West Ponce de Leon Avenue on Friday, Dec. 28.

“The manager reported the suspect entered the store through the front door carrying a duffel bag and immediately told her to ‘go to the back’ and she complied,” the Police Department reported. “As the manager and suspect entered the back room, the suspect produced a handgun and pointed it at the manager and a second employee who was already in the back room. The suspect ordered the manager to the ground and ordered the second employee to open the safe and place all of the iPhone X’s into the duffel bag.The employee complied. The suspect fled the store in an unknown direction of travel.”

Employees gave officers a detailed description of the suspect.

“Officer Johnson & Officer Kersey responded to the area of Ponce de Leon Place and Montgomery Street and was flagged down by a witness out walking his dog,” the Police Department reported. “The witness stated a man was hiding in nearby bushes on Montgomery Street. Officers located and took the suspect into custody without further incident. The two store employees were not physically injured. The stolen phones and a BB handgun were recovered.”

The Decatur Sprint store is a frequent target for criminals.