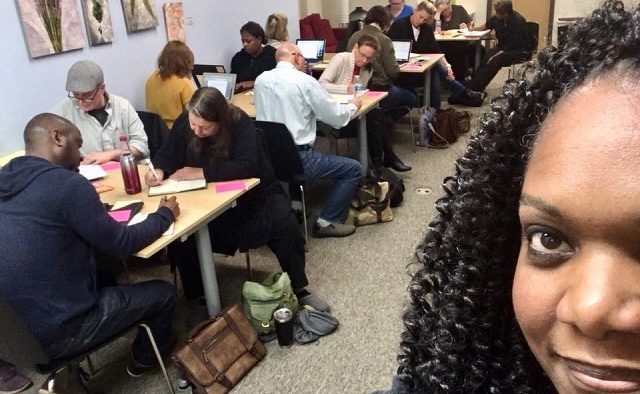 The Decatur Writers Studio is normally housed at Decatur CoWorks, 708 Church Street, where most of the writing classes are held, but it can sometimes be found roaming the streets.

Or North DeKalb Mall, where Nicki Harris Salcedo, an instructor and member of the Decatur Writers Studio board, held “write-ins” for the beginning and end of National Novel Writing Month in November.

“Writing is part of our community in more than just an academic way,” Salcedo said. “We’re here at the mall with regular people, teenagers and people going to the movies. It doesn’t have to be a club with our smoking jackets on and some leather books. We’re going to try to bring writing to the people as part of our mission.”

Even in these threadbare surroundings, writers can find inspiration.

“It’s not the Round Table at the Algonquin. It’s a very small round table in the semi-abandoned food court,” said Jessica Handler, who had joined Salcedo along with her husband Mickey Dubrow, both also members of the Decatur Writers Studio board. “I agree with the demystification, because I think some people feel that writing is unachievable or it’s some kind of high-form thing.”

When Daren Wang, founder of the Decatur Book Festival, launched the Writers Studio in the spring of 2016, it was conceived as an extension of the festival.

“The purpose of Decatur Writers Studio was to have some kind of presence of the Decatur Book Festival that lived all year,” Salcedo aid.

In addition to adult classes and a year-round social media presence offering tips and ideas for writing, there’s a summer camp for teens and children.

“So many people when they walk out of the Decatur Book Festival think, I want to write, I want to be a writer and it’s hard to get started, it’s hard to stay motivated,” Dubrow said. “You need a community. You need other people. You need someone to sort of give you permission to say yes, you can do this.”

Handler had a strong desire to see the Writers Studio thrive.

“I had been involved in Grub Street in Boston,” she said. “I’m familiar with the Loft Literary Center in Minneapolis and the Carnegie Center in Lexington, and we need this here. We need a place for writers to learn and convene and communicate. So we just started doing it.”

According to Dubrow, “When Daren Wang started it, it wasn’t doing as well as he thought it should, and he was going to shut it down. Jessica [Handler], Suzanne Van Atten and Terra [McVoy] and I got together and gave a list of reasons why he should still do it. We felt that Atlanta should have this Writers Studio. Every major city has one.”

After hearing their list, Wang’s response was, “Sure, as long as you guys do it.”

Since then, according to Handler, “It’s growing. When you first start an organization, it tends to be the same people, but I’m really impressed with the new courses we’re bringing in for the spring. People are teaching who I don’t know, and that’s fabulous.”

“There are so many writers in Atlanta,” Handler said. “What I find is that everybody gets along pretty well. I haven’t found a lot of me-first-ness. In some cities, it’s like, ‘I know something but I’m not going to tell you’ or ‘I’m not going to share who my agent is’ or this tip or this get-together. It’s all very secretive. What I’ve found among friends who are writers in Atlanta is that everybody’s very open, and why not invigorate that writing community and spread it out?”

Salcedo added, “Atlanta has become a Mecca for a lot of creative things, so if you think about music, entertainment, when people think about Atlanta, it does have a perception of being a city of creative people. I don’t know if that’s the way Atlanta was perceived 50 years ago, but the current Atlanta has a place for this creative entity.”

Salcedo, Handler, and Dubrow emphasized the open, friendly nature of the Atlanta writing community at large and the way that shapes the Decatur Writers Studio’s approach.

“The South is a hospitable place,” Salcedo said. “People are nice and people want to help you.”

The Decatur Writers Studio provides a community for developing writers, including classes and information about contests and author’s retreats around the country.

“Let’s just say it involves hands-on deconstruction of the written material,” she said. “I bring scissors and I bring tape.”

Writers do indeed seem to be everywhere in Atlanta, especially aspiring screenwriters.

Handler said, “I was at the bank today and the banker, we got to chatting and it turns out that in his private time he wants to be a screenwriter. I said, ‘Do you know about the Decatur Writers Studio and the crash course we’re having on screenwriting?’ While we were waiting for stuff to happen at the bank he looked it up and said, ‘Ooh, I’m going to register for that.’”

“It’s not just Atlanta,” said Salcedo. “We’re in a time when writing is very important.  I think we would all agree that it heals us and makes us laugh and makes us cry and I think it’s important for people … to try to dip their toes in. Or maybe there are people in the classes who have written books and published before and have fallen out of favor with writing and we’re going to bring them back.”

To learn more about the Decatur Writers Studio, visit Decaturwritersstudio.com.