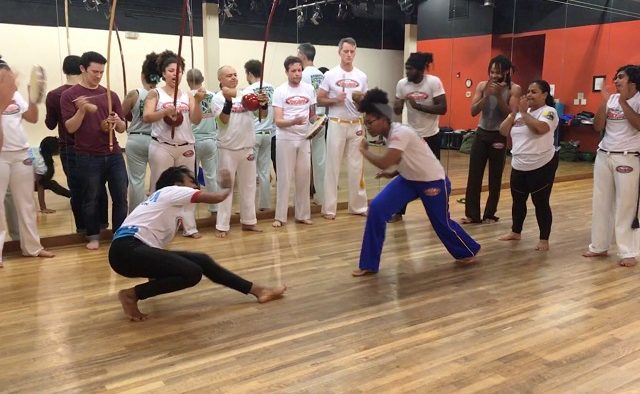 In Decatur, there’s a man who teaches a fighting style developed in secret by slaves.

Silva, the founder and lead instructor of founder of Grupo Maculelê Atlanta, is more commonly known as Mestre Fran.

If you’ve walked around the Decatur square on a Friday night, you may have stumbled across a large group of people crowding into Core Studios or out in the middle of the square. They will be singing and clapping in a circle, accompanied by tall twangy single-stringed instruments. In the middle of the circle, two people at a time, is something between a dance-off, an acrobatics demonstration, and a sparring match, with few punches or blocks but many leg sweeps, kicks, and dodges. It’s boisterous, and you may have been moved to ask yourself, “What is going on here?”

The musical instrument is called a berimbau, the circle is called a roda, and the answer to your question is “capoeira.”

“They created this art and this fight that was disguised as a dance, so they could free themselves,” said da Silva. “It has been 400 years of history so far.”

Mestre Fran, his wife Sara, and his daughter Dandhara, both of whom are also instructors for Grupo Maculelê, came to the United States in 2002 after Steven Alphabet, the Athletic Director at Georgia State University, issued an invitation for Mestre Fran to teach there.

“When we got here there wasn’t any capoeira at all, nobody knew what capoeira was, and it just started from there,” said da Silva.

He went on to also teach at Emory and open Grupo Maculelê Atlanta.

“I’ve also taught in Alpharetta and Sandy Springs but here the community is very nice. Decatur is a cool town, open-minded, and people here really like capoeira,” say da Silva.  “Here it has become like a cultural Brazilian center in Decatur. We teach Brazilian culture, everything in Portuguese, all of the classes and music. Many people here have been to Brazil many times to see the culture, it’s like an exchange. Now we have become part of Decatur’s culture, a lot of people in Decatur know we’re here, they see us all the time.”

Mestre Fran emphasizes inclusion for all ages and levels of ability.

Grupo Maculelê has programs for refugees and people with disabilities.

“We have been doing that for many years,” he says. Mestre Fran de Silva and his wife Mestra Sara Janeni were both recognized by the City of Decatur for their contributions in October 2018.

Da Silva sees capoeira as especially beneficial for children who may otherwise be too sedentary.

“In Brazil kids will go to school and then maybe play in the street. Here kids are a lot at home, or maybe play video games a lot, so capoeira is a great activity,” he says.

“Capoeira is more than a physical activity, more than a martial art.  They’ll learn instruments, singing, acrobatics,” he said. “It’s a colorful world for kids.”

Capoeira has become one of Brazil’s biggest exports.

“Capoeira is all over the world, all parts, and the thing that promotes Portuguese the most is Capoeira,” says da Silva. “In Paris there are more than 60 Capoeira schools, all over Paris. In New York, more than 30 groups.”

For him personally however, the value is in its health benefits and fun. He sought out exercise to strengthen his core and joints after recovering from back surgery, and “some friends of mine made me come on a Friday night to the roda, which is when all of the classes come together, the beginners and everyone else. So I tried it that Friday night, and came the next week, and never left.”

Five years later, Reuter says, “It has been a very good experience for me. I meet a lot of people, learn a lot, stay very active. I’ll be 54 next month.  I feel good, no problems with my back since then. “

“It’s probably the most multicultural, mixed group of people, and very respectful of everybody which I love,” he said. “The old and the young, men and women, all races, I think they treat people very respectfully and that’s important.  We just have fun.  It’s really one of the nicest things I’ve discovered in the world.”