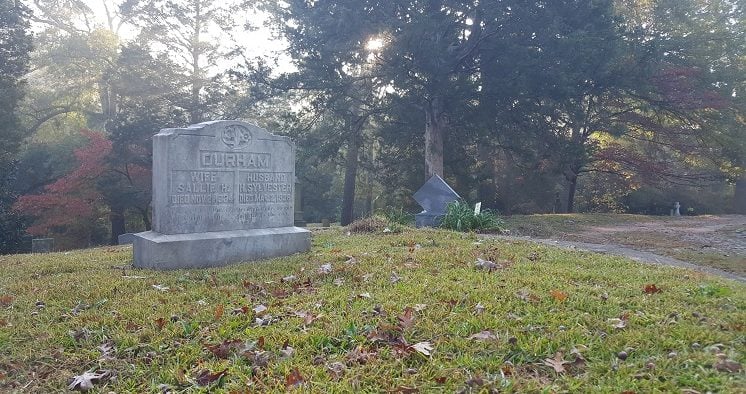 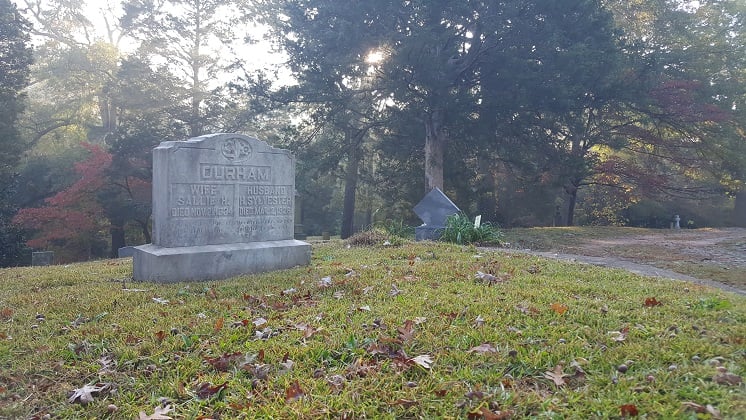 The memorial marker for Sallie Thomas Durham, and her husband, Sylvester Durham in Section 6 in Decatur Cemetery. Both formerly enslaved people who went on to prominence in Decatur and Atlanta. Photo by Laurel Wilson, provided to Decaturish.

Both older and larger than its better-known counterpart to the west, the metro area’s oldest municipal burial ground houses a complex record of the city’s past.

Just inside the pedestrian entrance to Decatur Cemetery on Commerce Drive sits a stately granite tombstone bearing the name Dr. Ormond Morgan. It marks the final resting place of the city’s second physician and the first recorded adult burial there in 1826.

Although the grave it marks is very old, the marker is quite new. It was added in 2015, thanks to a grant from the Decatur Beer Festival, a donation from local resident Mrs. A.D. Deweese, and several years of painstaking detective work by the Friends of Decatur Cemetery, a volunteer group dedicated to preserving and protecting the cemetery for posterity.

“Levi Willard, one of Decatur’s first historians, wrote in his memoirs in 1876 that the last time he saw Dr. Morgan’s grave, a sapling was growing out of it,” recalls Cathy Vogel, an FODC founder. “We found an old photograph from the 1970s of the area that he was believed to be buried in and right there was a tree stump.”

“It’s hard to even imagine what Decatur was like back then,” Vogel says. “Atlanta was not there yet, the railroads didn’t come through here until the 1840s.”

Records indicate that the Georgia Legislature created the Decatur City Cemetery Commission in 1832, making it the oldest municipal cemetery in the Atlanta area. Records at the cemetery itself indicate that it has been used as a community burial ground since at least 1823.

“Some church cemeteries are older,” Vogel says. “But for public cemeteries, where everyone could come to be buried, Decatur is the oldest.”

Walking through the seven and a half acres of the old section is like taking a tour of early American history. A hand-carved headstone marks the grave of John Moffett, noting his service as a veteran of the Revolutionary War. The grave of Confederate war veteran and early DeKalb legislator, Robert Alston (1832-1879), rests mere feet away from the grave of Edward Cox (1843-1901), a rival lawmaker who killed Alston in a duel. The impact of the 1918 Spanish influenza epidemic is evident. Graves throughout the 46-acre “new section” – opened in 1921 – bear familiar names like Scott, Candler, Forkner and others.

For a town that has seen it’s courthouse and historical records destroyed by fire three separate times and a landscape that seems perpetually being reshaped by successive waves of urban renewal and redevelopment, the cemetery may be the one place where residents can get a true perspective on the city’s history, says Vogel.

“Oakland Cemetery promotes itself as Atlanta’s most tangible link to the past, and I think that is what I like about [Decatur’s],” she says. “You can really learn so much about a place from its cemeteries.”

Maintaining those tangible links is even more important for families whose contributions to the city’s growth have often been erased, notes local historian Laurel Wilson. In 2014, Wilson began researching the history of the graves in the segregated African American section of the old part of the cemetery, known as section 6.

Like most municipal cemeteries, the graves of black Decatur residents were segregated from white residents before the 1960s. In many cases, the people buried there were also prominent members of the community, yet their names do not still grace buildings or streets.

At one time, Decatur’s neighborhoods were strictly segregated, with certain blocks designated as white- or black-only. The best known of these was the neighborhood of Beacon Hill, which existed around the area now occupied by Decatur High School, the Allen Wilson Homes and the Swanton Hill town homes. There were others, says Wilson, but they were all gradually eliminated.

“I think the cemetery is important for many reasons, but one big reason is when it comes to black heritage in Decatur, that those graves and the headstones may be some of the only reminders that these people existed,” she says.

An example, she notes, is Henry Oliver, a professional blacksmith and Beacon Hill landowner who started the first African American business during Reconstruction. One of the main neighborhood streets was named Oliver Street in his honor. During the urban renewal projects of the 1960s and 70s, when much of Beacon Hill was redeveloped, the street grid was changed and Oliver Street was incorporated into what became Commerce Drive. Oliver House, the senior housing complex along Commerce, was named for him.

Oliver died in 1904 and, along with his wife, Sylvia, is buried in section 6 in a grave that is unmarked. Cemetery note cards indicating the purchase of the plot and burial are the only way to know where he was laid to rest.

Wilson became interested in tracing the family history of people buried in section 6 during her graduate studies in heritage preservation at Georgia State University. She began by taking names from the headstones in the section that were in good condition, then combing through the thousands of note cards that, from the cemetery’s founding, have served as its burial records. Over the past four years, she has been able to verify the graves of more than 900 people buried in section 6. Using that information, she used genealogy databases, archived newspapers, and social media networking to track down descendants.

Through her research, she discovered the deep roots that many of Decatur’s black families had in DeKalb history, as well as connections to the development of the Edgewood and Sweet Auburn neighborhoods in Atlanta.

Wilson did her final master’s project–a 30-minute video documentary–on four generations of descendants of Sallie Thomas Durham, a formerly enslaved woman who became a well-known caterer for black and white families in Decatur and Atlanta. The grave for Durham and her husband, Sylvester, has a prominent marker in section 6.

Mae Yates’ grand-daughter, Clara Axam, told Wilson that she had heard stories all of her life about Sallie Durham and her other relatives and knew Durham was buried “somewhere in Decatur” but did not know where.

“I was able to meet her and show her where Sallie was and tell her what I had found out about her work as a caterer,” Wilson says. “And she filled in this wealth of information about what she knew about where Sallie had come from and her family and their lives, that is just wonderful.”

The Friends of Decatur Cemetery hopes to obtain grant funding to support the placement of a memorial marker on Henry Oliver’s grave this year, says Vogel, and to continue their work of preserving this part of Decatur’s legacy.

She hopes that Decatur’s residents will make use of the cemetery as a park and gathering place and use it to teach their children about the region’s rich history.

“I want people to see it as a beautiful place, not a sad or a spooky place,” she says. “We want people to come and enjoy the place, as long as they enjoy it in a respectful way.”

Want to learn more about the Decatur Cemetery?

More information about the cemetery, including their new brochure with a self-guided tour map, is available online at: http://www.decaturga.com/city-government/city-departments/public-works/decatur-cemetery.

Guided walking tours of the cemetery will resume in May and continue through October on the second Sunday of every month.

Laurel Wilson maintains a website dedicated to the history of Decatur’s African American community at www.decaturhistory.com. She is available to conduct tours of the graves in Section 6 by appointment. On Friday, Dec. 14, Wilson will be doing a Lunch and Learn about her documentary, “Five Generations – From Enslavement to Public Service in Atlanta,” at noon at the Georgia Archives, 5800 Jonesboro Road, Morrow.

Correction: An earlier version of this story misidentified another local cemetery. This story has been updated with the correct information.