How did a horse farm become part of DeKalb County’s park system?

How did a horse farm become part of DeKalb County’s park system? 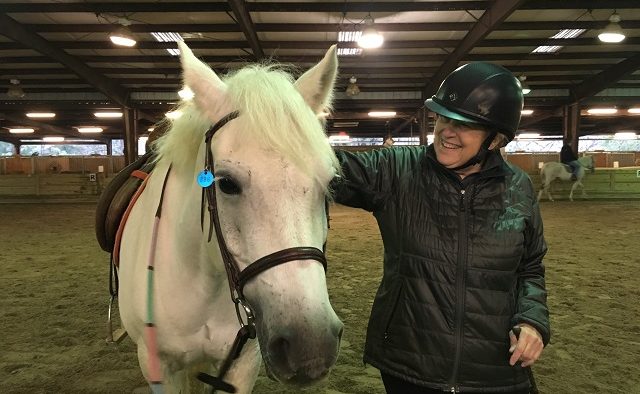 Tucked away on Lawrenceville Highway across from North DeKalb Mall, Little Creek Horse Farm is an unusual part of the DeKalb County park system.

According to Jane Donofrio, President of the Little Creek Farm Conservancy, the county purchased the forty acre farm in 2004 as green space. The property, most of which is on a flood plain that makes it unsuitable for development, had originally belonged to the Sargent family (for whom Sargent Hills is named). It was a dairy farm up until the 1950s, when it became a horse farm.

“I moved here in 1962, and I really had not ridden but my parents were looking for something for me to do,” Donofrio said. When DeKalb County bought Little Creek, a group of people who had horses there formed the Conservancy to help out, “because there was nobody in the county government that knew how to run a horse farm.”

Many members of that original group are still around.

“We started coming here when my daughter was seven and she’s now thirty,” said Katie Day, a founding Little Creek Farm Conservancy member and part owner of Cooper, a nine year old Connemara. “She went away for college for a few years but then we came back. She was the rider, she does hunter-jumper and I decided to start riding because I got tired of just watching. I never rode as a kid, so there’s hope for you after you’re 40 to learn how to ride.”

“What the conservancy does is work in partnership with DeKalb County, primarily as a fundraiser but also as an outreach facility, so that we run events during the year, the spring pony rides, the big fall festival and then some smaller things,” Donofrio said. “We have a Halloween horse and rider costume contest and we do Neighborhood Appreciation Day, things to bring the community in.”

She pointed out the new Sunset Pavilion built by the Conservancy.

“This is the best sunset view inside the Perimeter,” Donofrio said.”The sun goes down right behind those trees and it’s gorgeous.  The public is welcome to get in touch with the Conservancy if they’d like to have an event.”

Balanced with the desire to connect with the community is a concern for safety, Donofrio said. “Obviously, you see how big these animals are and they’re not aggressive, but they move unpredictably. They can hurt you without meaning to. So the number one thing we think about here is safety, what’s a safe way we can protect the public from the horses and the horses from the public.”

Donofrio’s white mare approached, ears forward. “Hi Gracie, we have no treats. You were so good today.”

Once Gracie determined that Donofrio had no carrots, she turned around and walked away. Donofrio laughed. “She always does that. No food? Bye!”

“We have lesson programs. Mark Jaglarz teaches equitation. Dana McDaniels does hunter jumper which is a different style,” Donofrio said. “We have a therapeutic riding program Stride Ahead where they work with children and adults with developmental disabilities, and we have a program with the VA for veterans. We’re just beginning a pilot program for the next year called Stable Moments, where we’ll be working with individual children in foster care. They’ll work on the ground with the horses to build self-esteem and confidence. Being around horses for these children who exhibit PTSD symptoms and have a lot of trauma, having to deal with an animal this size and learn that calmness and that centered-ness really produces some significant benefits, so that’s a program we’re going to be starting here for the community as well.”

Katie Day’s pony Rhapsody, a 25 year old paint who is missing an eye, is active in the Stride Ahead program. “I think the kids and adults really relate to her. She’s a little injured too, but she’s just as kind and sweet and lovable as you’d ever want,” she said.

“We’ve been very fortunate, we’ve gotten some very good support from the DeKalb County Commission,” Donofrio said, adding that Commissioner Gregory Adams had allocated another $200,000, in addition to money raised by the Conservancy. “We raised $50,000 to rehab [the indoor] arena and we’ll have to raise another fifty for the outdoor arena,” in addition to building the pavilion.

She rattles off a list of improvements in process or in the works, including to the barn, the pastures, the perimeter fencing, security and safety measures, and the trails. “We’re going to put an Audubon area in down there near where there’s kind of a little picnic area right now. We’re working to have that be a public space as well as a good in-town riparian space.”

“This is such a nice little gem here, in the city within 285, I think people enjoy coming here and watching the horses, getting a touch of country in the city,”  Day said. “We’re moving forward and moving on, and that’s an exciting thing for everybody. This has been a bit of a gem that’s lost it’s luster and now we’re polishing it back up and making it everything it needs to be.

To learn more about the horse farm, visit littlecreekfarmconservancy.org.