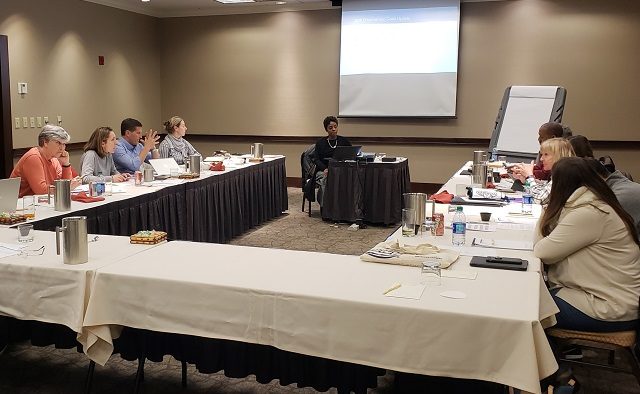 Young Harris, Ga. – The Decatur City Commission met for the first day if its annual retreat on Thursday, Jan. 31, at the Brasstown Valley Resort.

During the meeting, City Commissioners discussed the possibility of City Schools of Decatur students using a track at Agnes Scott. They also discussed the city’s lack of progress in creating and preserving affordable housing in the Decatur.

The annual planning meeting, held two hours outside of city limits, sets the commission’s priorities for the upcoming year and is also an opportunity to review the progress made from previous years.

The morning began with various team building exercises and smaller group discussions between commissioners and city staff. After lunch, City Manager Andrea Arnold spoke about her first month on the job. Arnold, who took over after Peggy Merriss retired, said she has a 30 day, 60 day and 90 day plan for her first year as City Manager.

“There’s definitely curiosity about my decision making and how I feel about the work and I think you’ll definitely see that my approach is collaborative and I hope that staff in the room are seeing that,” Arnold said.

She said many employees breathed a sigh of relief when the City Commission decided to go with an internal candidate who had worked closely with Merriss.

“There was a fair amount of anxiety when the position was in limbo,” Arnold said.

While the city made a fair amount of progress over the last year — most notably with developing a plan for the former United Methodist Children’s Home property, renamed Legacy Park — city leaders also admitted struggling with the issue of affordable housing.

Late last year the city held an affordable housing summit to discuss the problem in depth.

Decatur has been pursuing a Cottage Court pilot project that seeks to construct six affordable homes at 230 Commerce Drive. That project has stalled, however, because of issues raised by the Georgia Department of Transportation according to City Planner Angela Threadgill.

“Commerce Drive is a state road and any changes within right of way and a new curb cut has to have their approval,” she said. “GDOT has reviewed the plans and has expressed concerns about it.”

For the purposes of evaluating the available housing stock in Decatur, city staff have used a metric of housing that is affordable to residents making 80 percent of Area Median Income or lower ($59,840) as the threshold to define lower income housing.

Rental units at newly constructed apartment buildings in Decatur are generally available to people with incomes at or above the AMI. Decatur Housing Authority complexes and older multifamily buildings provide most of the rental housing available to households with lower incomes. And single-family home rentals are “essentially non-existent” to those with incomes below the AMI.

Mayor Patti Garrett acknowledged it’s a problem the city has been grappling with for years.

“I think it’s a difficult issue, first of all, to define,” Garrett said. “Are we talking about subsidized housing? Missing middle housing? It’s a regional issue. As a region we’re trying to figure that out. We’re looking for Decatur specific kinds of solutions. Also, being a small city, it’s going to be more incremental than what the city of Atlanta can do. The housing summit helped pull together things that we had been looking at in a more tangible way.”

It’s a topic that will be discussed further on Feb. 1, the second day of the retreat.

During Day 1 of the retreat, commissioners discussed the possibility of CSD students using the track at Agnes Scott.

During the planning process for Legacy Park, one of the major disappointments was the lack of much-discussed athletic facilities that students and parents have been asking for. While the plan features a new track and field facility, the track likely won’t be built for several years.

Using the track at Agnes Scott could resolve that problem, but it isn’t currently known if Agnes Scott is interested in pursuing a partnership with the city.

Garrett said to her knowledge the track isn’t currently being used.

“It is in need of repair right now,” Garrett said. “It’s got a piece of softball equipment on top of it.”

She said the city would like to work with Agnes Scott and CSD officials to see if the track could be repaired and used by the community.