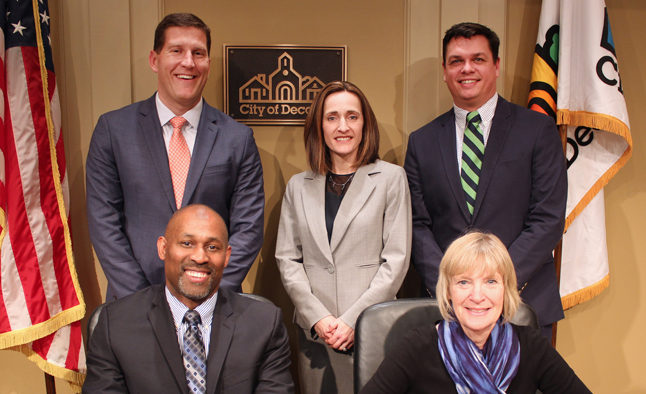 The Decatur City Commission on Jan. 22 unanimously rejected a developer’s request to build a community of 43 townhomes along Church Street near the entrance to Glenlake Park.

A lawsuit the developer filed against the city over the project was also dismissed, meaning a scheduled hearing in DeKalb Superior Court on Jan. 28 is off.

The City Commission’s decision followed more than an hour of public comments, most of which were firmly against the project proposed by The Quarters, LLC. The comments included the city’s attorney, Bryan Downs, and an attorney for the developer accusing each other of misleading the public about the project.

“Many of the things that were said were just outright false,” Downs said. “They’re contradicted by documents in the record.”

Kathryn Zickert, an attorney for the devleoper, claims that after the The Quarters submitted its preliminary plat in April 2017, city Planning Director Angela Threadgill stonewalled their efforts to communicate about approval, then requested changes to the design beyond what was required in the city’s Unified Development Ordinance at the time. The developer then submitted a revised plat that made all of the changes requested, except the ones that were not required in the UDO at the time.

Two days after that submission in June of 2017, Zickert says the City Commission voted to amend the development ordinance to specifically require the changes that Threadgill previously requested.

The developer filed a petition for a writ of mandamus in DeKalb Superior Court in July 2017 to force the city to consider the application under the code that was in force when they originally submitted the plat.

Superior Court Judge Gregory Adams ruled in favor of the city and dismissed the developer’s petition. However, a subsequent appeal to the state Court of Appeals was heard by a three-judge panel which reversed Adams’ decision on October 28 of last year.

The appeal panel found that the reasons Adams gave for dismissing the initial petition were not valid but did not rule on whether the city had to consider the development proposal or whether it should be considered under the 2017 version of the UDO.

For her part, Threadgill told the Planning Commission the April 2017 submission was never an official application, but instead a “sketch plan” that was submitted without the city’s formal application form, payment of the application fee, or the required property owner authorizations that should accompany a final application submission. She pointed to minutes of the February 2017 meeting where she informed the commission that there were elements of the Unified Development Ordinance that needed revision.

Zickert was not at the Jan. 22 meeting. Attorney Alex Brock attended the meeting and spoke on the developer’s behalf.

The attorney for the developer said when the proposal was submitted in April 2017, it was the developer’s understanding that it was a formal application.

“To state it was a pre-application comment, I don’t want to say misleading,” Brock said. “It was not entirely correct.”

The City Commission ultimately sided with its attorney and Planning Director.

For Mayor Pro Tem Tony Powers, it was an easy decision.

“I don’t see where you have an application that was turned in with a fee,” Powers told the developer. “It’s that simple for me. We don’t have a complete transaction, so something is missing. For me to sit here and vote on something that’s not there … There was something not done in that process in April 2017.”

Commissioner Scott Drake said the developer has other projects in the city and should know how the process works.

He did note that the site is likely to be developed at some point and it would be in the city’s interest to figure out how to manage traffic there.

Threadgill said developing 43 town homes there would increase the regular trips from 36 to 172 trips per day.

Commissioner Kelly Walsh said she was concerned about the lack of outreach to the community about the project.

“There just wasn’t outreach in the community at any point,” she said. “I believe the developer knows how this works here. I’m at a loss as to why that didn’t happen.”

It’s not clear what will happen next. The homeowners who live on the site of the proposed project remain in limbo. The developer has agreements to purchase nine single-family homes on the east side of the street from the lot immediately adjacent to the park entrance up to the Candler Grove townhome development. The total area includes 2.54 acres.

One of those property owners, Tom Hills, indicated that the homeowners and the developer intend to keep fighting. He called the dismissal of the lawsuit “a procedural maneuver.”

“Not at all a surrender,” Hills said. “There is a plan in place but it’s The Quarters, LLC that is implementing so I should not speak to the approach.”

Attempts to reach the developer were unsuccessful.

Editor’s note: Portions of this story were compiled by viewing a live video stream of the Jan. 22 meeting.