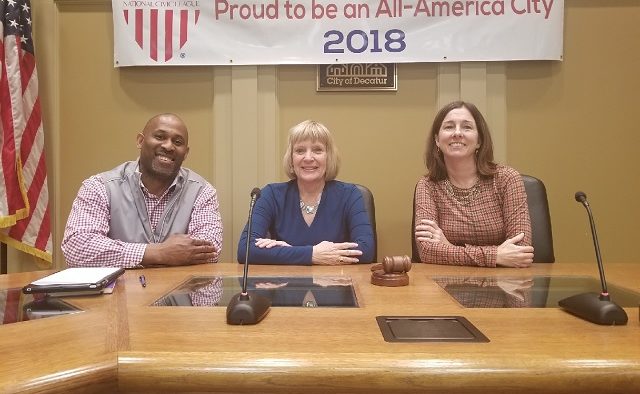 This was also the first commission meeting administered by new City Manager Andrea Arnold. Arnold has been with the city since 1997 and served as assistant city manager since 2004.

“I am honored to serve as mayor for 2019,” Garrett said at the meeting. “We [the commissioners] look forward to working together this year.”

In other business, the commission:

– Awarded the Decorate Decatur trophy to the Woolley family of Harold Byrd drive for winning the annual contest for best holiday decorations.

– Voted to grant an alcoholic beverage license to owner Sean Crotty for Kelly’s Market, 308 Howard Avenue. The license will allow both retail sale of beer and wine as well as serving beer and wine on the premises.

– Re-appointed Bryan Downs of the law firm Wilson, Morton and Downs to serve as city attorney.

All Decatur municipal judges are appointed to one-year terms. In addition to the above judges, the city appoints to substitute judges to fill in when the others are unavailable. The commission re-appointed substitute Municipal Court Judge Charles Bailey to another term, and appointed attorney F. Robert Slotkin, Jr. as a second substitute judge. Slotkin will replace outgoing substitute judge Robert Leitch. After serving with the city court for 24 years, Leitch retired this year.