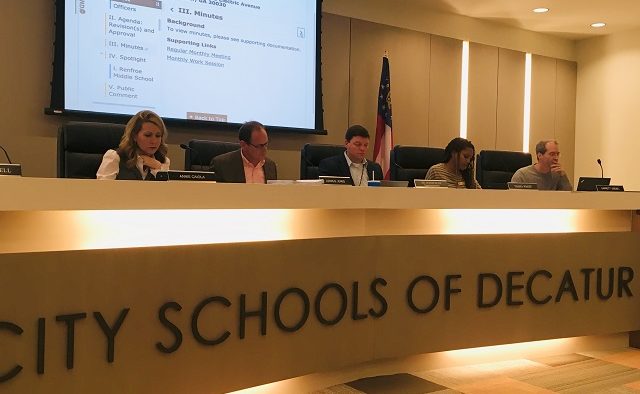 The Decatur School Board held its regular meeting on Jan. 15, 2019. Left to right are board members Annie Caiola and Lewis Jones, Superintendent David Dude and board members Tasha White and Garrett Goebel. Photo by Sara Amis
Share

The Decatur School Board is entertaining offers from outside firms to study the effect of tax breaks for seniors on the school system’s finances.

The school system in December issued a request for proposals from firms interested performing the study.

School officials will decide on a firm by March 8 and approve a contract at the March 12 School Board meeting. The budget for the project is $40,000. The final report will be due June 30.

Decatur Schools expanded tax breaks for seniors after the School Board asked voters to approve a $75 million general obligation bond for school construction, which voters did in 2015 by an overwhelming margin. Borrowing money means higher taxes to pay off the debt.

The tax break, which was also approved by voters and took effect in January 2017, was partially a way to alleviate concerns about the school tax burden on seniors. It exempts any homeowner in Decatur over the age of 65 from paying school taxes.

The initial estimate of the costs to the school system was $1.2 million per year. That was way off, however. The current estimate of what this tax break is costing City Schools of Decatur is $2.4 million per year. Combined with other exemptions, CSD lost $4 million in revenue in Fiscal Year 2017-2018. The projected loss for the current Fiscal Year, 2018-2019, is $4.8 million, CSD Finance Director Susan Hurst previously said.

Before the tax break appeared on the ballot, the School Board asked the state Legislature to add a “sunset” provision that would end the tax break in 2021 unless it was renewed. The board caught some flack for that decision, but it did give the board some time to examine how the lost revenue would affect the school system.

The firm selected for the job will provide an estimate of the impact of the exemption over the next 10 years and provide recommendations on how to modify the tax break when it comes up for renewal.

– School Board members Lewis Jones and Tasha White were elected board Chair and Vice Chair of the board, respectively.

– School Board Member Garrett Goebel stated that he would not seek re-election this year. He was elected to the board in 2011.

Goebel said he was announcing early so that there would be plenty of time for prospective candidates to consider their decisions. “It’s time to let somebody else have a chance.”

– The Spotlight presentation was on Renfroe Middle School’s International Perspectives and Adventure Quest courses, taught as a combined class by Krysta Johnson and Christie Chalberg.

Students ride bicycles on field trips and the term culminates in an overnight camping trip on which the students set up camp and do their own cooking.

According to Krysta Johnson, these activities “get students outside their comfort zone, sometimes literally outside” as a means to encourage students to develop curiosity and self-reliance as well as knowledge.

– The school system received a “clean” audit for Fiscal Year 2018, meaning the audit contained no findings of mismanagement and no questioned costs.