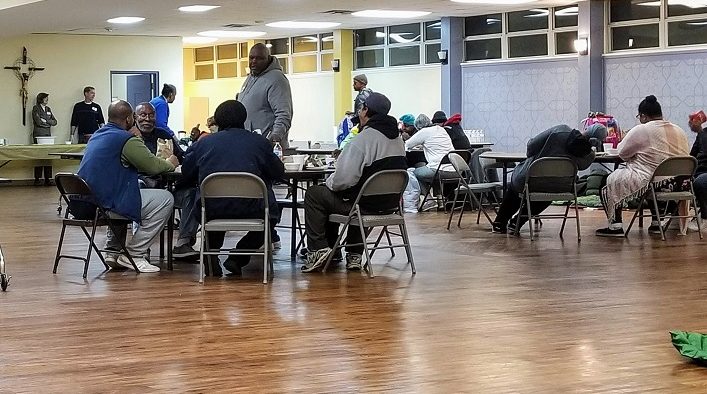 Monday night, they were safe. Some huddled at tables sharing a meal, others inflating air mattresses to cushion the hard floor of the church fellowship hall. Women, men and children gathered at Saints Peter and Paul Catholic Church in the Candler-McAfee neighborhood south of Decatur to spend a night out of the cold.

Tonight, no one is sure where they will be.

Many, like Kay, may sleep in their cars. Some, like Christyanne, will find shelter at MARTA stations or, sometimes, on the patio of a coffee shop with a sympathetic owner. Sophia says she will sleep in a storage locker she has rented since losing her housing five years ago.

They say they are grateful for the new emergency warming shelter started earlier this month by the group, A Home for Everyone in DeKalb, because there are not many options for people, particularly women, who find themselves without shelter here.

“Nine out of 10 shelters in the metro area are for men only,” a guest named Sophia told Decaturish. “Some places, like the Gateway [Center in Atlanta], will allow women with children inside. But, people like me, without kids, would be turned away at the door.”

The guests we spoke to asked to use only first names, and to not be photographed, since they are either working during the day or looking for work and housing.

Single women without children, families, mothers with older teenage sons, and men who work late-shift jobs or work construction are the most vulnerable, they told Decaturish.

“Many places have rules that you have to be in [the shelter] by 7 p.m. or 10 p.m.,” says Kay, a guest at the shelter who was staying there without her husband and family. “A lot of men who are restaurant cooks or work in the restaurants can’t do that.”

Many others have rules that prohibit men and boys over the age of 16 staying in shelters with women and younger children.

Identifying and addressing the key gaps in housing and shelter availability in DeKalb is one of the central missions of the initiative, A Home for Everyone, says Rob Johnson, one of the group’s founders and the former chief operating officer of the Atlanta Community Food Bank.

The group got its genesis just over two years ago, when Johnson and co-founder Shelly Fine met through the organization Compassionate Atlanta. Both residents of Decatur, they discovered that addressing the problems of homelessness and lack of affordable housing were issues they were passionate about.

“The DeKalb continuum of care is growing and they are putting together a good plan — but the process has been slow and there are gaps,” Johnson says. “We hope to get together a plan and a group that can go after some of these private sector partnerships and funding that are not as restrictive as the state and federal [government] grants and will allow more flexibility.”

Area Continuums of Care (CoC) are the mechanism by which the federal Department of Housing and Urban Development (HUD) distributes grants to support housing efforts. Administered through the state Department of Community Affairs, the grant funds are distributed to local service providers with oversight from county community development officials.

– Decatur Cooperative Ministry, which operates Hagar House, a shelter for women with children in Decatur, as well as a transitional housing program and rental, utility and transportation assistance;

– The Threshold Ministry of Decatur Presbyterian Church, which also provides rent, utility and transportation assistance, and a food pantry;

– Clifton Sanctuary Ministries, which provides meals, has a transitional living program for men, and provides medical and dental checkups; and several others.

The goal of A Home for Everyone in DeKalb is not really to start another assistance organization, Johnson says, but to help those already working to collaborate more easily, recruit more private funding, and, then, to encourage new groups to start that would fill any gaps in the services offered.

With winter approaching, however, they felt it was important to make basic shelter a priority.

They originally wanted to find space for a more permanent, nightly shelter in or around Decatur, adds Shelly Fine, who coordinates food, volunteers and donations for the current warming shelter.

“We looked into that, but it was going to be so daunting, that we decided to start with something that we knew was needed and that we might be able to do more quickly, and that is an emergency freeze shelter,” she says.

The group picks up those needing shelter in front of Sycamore House, the assistance center run by the Threshold Ministry of Decatur Presbyterian Church. When the weather forecast predicts temperatures will drop below 35 degrees at any point during the night, the shelter will open. Fine places flyers in windows around the Square and distributes them to local social service agencies. County regulations only allow them to take 20 people, and the group prioritizes the elderly, disabled and those with children.

Currently, there is only one other freeze shelter in DeKalb County at Tucker United Methodist Church. Both only open when the temperature is predicted to drop below 35 degrees.

This past holiday weekend, the county announced that it would temporarily open three fire stations as warming centers, allowing those without shelter to come inside the station from 5 p.m. to noon the following day that Sunday, Monday and Tuesday evenings.

In addition to the one at Saints Peter and Paul, A Home for Everyone plans to open an additional freeze shelter at North Decatur Presbyterian by the end of the month and, possibly, a third in February, at a location still to be determined.

Just getting the first shelter open has required the cooperation and assistance of many area churches and other organizations, Fine says. Saints Peter and Paul have provided most of the dinners, lunch bags and hygiene kits distributed to the guests each night they are open. First Baptist Church of Decatur has loaned its shuttle bus to pick up guests outside Sycamore House near Decatur First Presbyterian. And, the Hub Christian Center’s congregation frequently provides breakfast and donated several lightweight air mattresses.

In addition, A Home for Everyone contracts with a private security firm to have a security guard at the shelter at night.

“We felt that the organizations would like it more if we took that step, though there has not been any kind of issue, so far,” Fine says.

Based on their experience with their first shelter, Fine and Johnson have put together a how-to manual for organizations that might be interested in offering emergency shelter to the homeless.

Both Fine and Johnson said both DeKalb and City of Decatur officials had been very supportive of their efforts to get the emergency shelter up and running.

“[Decatur Police] Chief Booker has coordinated with us and says his department is aware of about 38 or 40 individuals that they know by name and know are regularly without shelter around downtown Decatur,” says Fine.

DeKalb Fire Marshal Joseph Cox provided guidance on how to get emergency shelters established and set the limit for each temporary shelter at 20 residents a night, and advising on security measures that needed to be taken, Johnson says.

The city of Decatur regularly facilitates meetings between organizations in the city that provide assistance to homeless people and those at risk of becoming homeless, says City Manager Andrea Arnold. “The city [also] keeps in regular contact with representatives from these different organizations.”

The city has compiled a list of assistance organizations in Decatur and the larger metropolitan area that it distributes to owners of area retail businesses and restaurants who may encounter people in need of help, she says.

On Thursday night, the DeKalb County Department of Community Development will conduct its annual Continuum of Care Homeless Count and Survey. Although HUD requires CoCs to conduct counts of the homeless population every other year, DeKalb has done so each year for the last five years.

Conducting the survey allows the county to continue to be eligible for almost $5 million annually in state and federal funding to support housing and services for homeless people.

To volunteer to help with the count, sign up here.

To learn more about A Home for Everyone in DeKalb, contact Rob Johnson at [email protected] or Shelly Fine at [email protected]. They are in need of volunteers to sign up to periodically staff the shelter or provide meals. In addition, they are looking to add the use of a bus or other large vehicle to help transport guests, as well as CDL-qualified drivers willing to transport them.