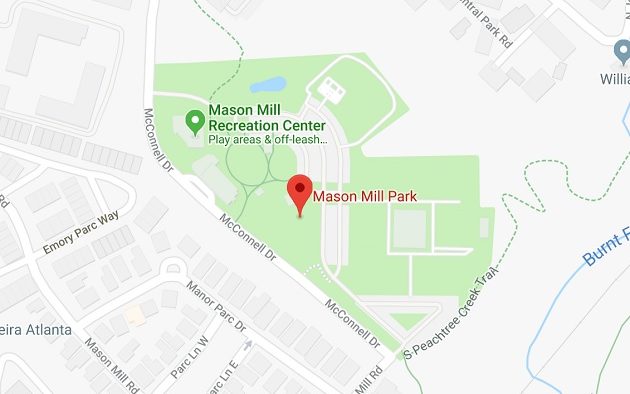 DeKalb County Animal Control seized a “pit-bull type” dog after an attack on another dog at Mason Mill Park.

The attack injured the other dog and the dog’s owner after the owner intervened. A police spokesperson said the report identifies the dog accused of attacking the other dog as an, “American Pitbull Terrier.”

The incident occurred on Dec. 27.

According to DeKalb County Police, “At 6:15 p.m. on December 27, 2018, the complainant was at the park with her hound mix dog. There were two pit-bull type dogs in another fenced area inside of the park. When the owner of the pit-bulls took one of the dogs to the car, the other crawled under the fence and began to attack the hound mix dog. The owner of the hound mix sustained minor injuries to her hand while attempting to break up dogs. The owner of the pit-bull stayed and cooperated with the investigation. The hound dog was taken to an area vet for treatment. The pit-bull owner was cited and the dog was taken by DeKalb Animal Control and placed on 10-day hold.”

A Go Fund Me established to cover the hound dog’s medical bills says the dog suffered puncture wounds to different parts of her body and that the vet bills have exceeded $2,000.

“Recently, my very sweet pacifist rescue dog, Grace, was attacked by a large male dog – a pit, although I’m not usually anti-pit! Grace was badly injured, but survived thank God,” the Go Fund Me post says. “I, mistakenly, tried to break up the attack and rescue her. Bad idea:  it didn’t help to end the attack and thus I was injured too, lacerations to my hands and some nasty-looking bruises to arms and legs. Grace, of course, suffered the worst of the battle: puncture wounds to several parts of her body, even to her sweet soft floppy ears! The most serious injuries are to her left front leg – I worried that her leg was broken or so badly damaged that she would lose it. Fortunately, no fractures and so far it’s healing well. She has stitches and staples to many of her injuries. Most seem to be healing without infection.

“The dog who attacked Grace has been impounded and, so far, he does not have symptoms of rabies or other illness. If he stays healthy, I may be able to avoid having a series of rabies shots. Grace has been a little canine saint through this whole awful ordeal: she limps along in her protective ‘boot’ when I take her for a walk, she takes her three different meds without hassle, and best of all she seems like her same sweet self as mellow as before. Maybe a little more clingy with me! Doesn’t seem to be afraid of other dogs in neighborhood.”