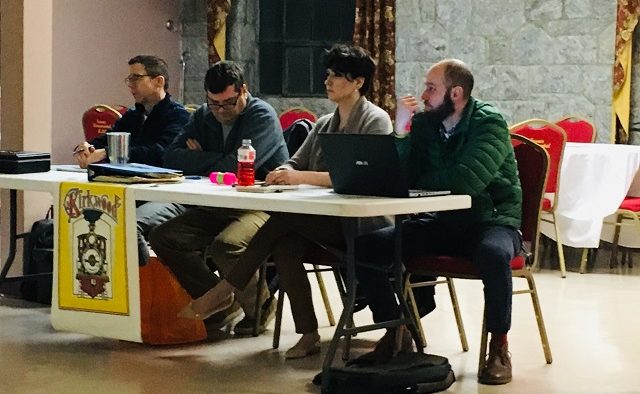 The membership approved a new budget which included spending some of the organizations reserves on beautification projects such as updating the mural on Rocky Ford Road. A rezoning request for 1599 Memorial to allow a self-storage business to be built next to Floor and Décor was also approved.

Lt. Crowder of the Atlanta Police Department described preparations for the upcoming Super Bowl in Atlanta.  He emphasized that even though there will be “maximum police presence downtown,” neighborhoods like Kirkwood will be fully covered. This will be accomplished by a combination of extra help from other police departments and longer hours for APD officers.

Imagine Memorial Corridor Executive Greg Guiffrida said, “The big project we have been working on for a while is a resurfacing and restriping for about four miles of Memorial Drive, from Candler Road all the way in to Pearl Street in Reynoldstown. That includes East Lake, Kirkwood, Edgewood, and Reynoldstown.”

Construction will begin in the spring with a completion date of June 30.

Lisa Stone asked for $499 in funding to build Little Free Pantries at Toomer Elementary and East Lake YMCA, which was approved.

Sandra Mersinger reported that the Kirkwood Dog Park project received a $6,200 grant from City of Atlanta/Office of Zoning and Development/Neighborhood Coordination Division.

The project has received approval from the City of Atlanta Parks Department and the Urban Design Committee.  Additional funding from the Kirkwood Business Owners Association, Kirkwood Neighbors’ Organization, The Kirkwood and Edgehill at Historic Kirkwood add up to $13,500 of the $41,000 proposed budget. Mersinger hopes to begin construction this spring in Gilliam Park for a summer 2019 opening.