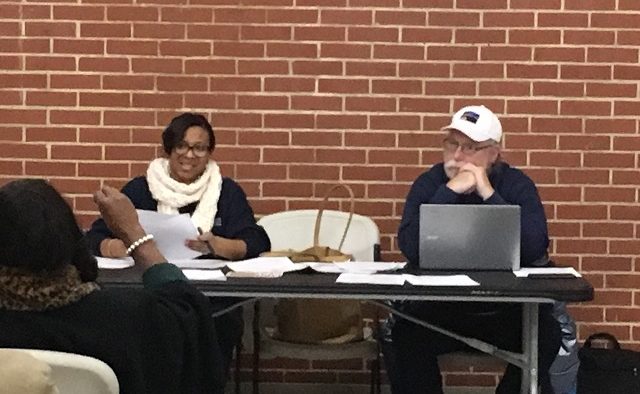 NPU-O Vice Chair Kila Smith on the left and Dana Blankenhorn, Secretary, on the right. Photo by Sara Amis
Share

NPU-O members voted to support an amendment to Atlanta’s zoning ordinances which would allow adult day care facilities, via special use permit only, in residential zoning districts R-1 through R-5, R-G, and R-LC.

Adult day care in the ordinance is defined as “designed to provide care and companionship for older adults who need assistance or supervision during the day.”

Hours of operation will be limited to between 6 a.m. and 7 p.m., and any given facility will be at least 2000 feet away from any other facility.  The City of Atlanta Zoning Review Board will hold a public hearing next month at Atlanta City Hall.

In other business, Alan Raines announced the imminent opening of his restaurant, El Tesoro, located at 1374 Arkwright Place near the corner of Arkwright Place and Whitefoord Avenue.

After a health inspection on Wednesday, the planned opening will be Saturday January 25.

Raines says the menu will include coffee, espresso, breakfast burritos, breakfast tacos and “familiar taqueria classics as well as off-the-beaten-path items from different parts of Mexico,” including mulitas which he describes as “sort of a cheesy, sloppy taco sandwich.”  Initial hours will be 7 a.m. to 2:30 p.m. seven days a week, with plans to expand over the next two months.

Sgt. Jamie Johnson from the MARTA Police Department announced that MARTA will be open 24 hours a day during the Superbowl. Twenty-four hour service will begin on Jan. 31 and run through Feb. 4.