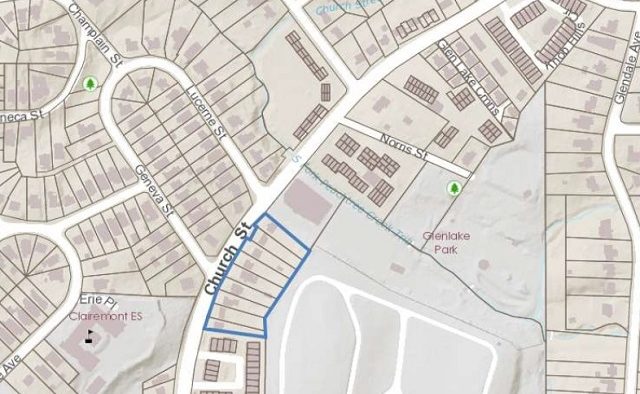 An exhibit from the Planning Commission packet showing the lots involved in the planned development. Image obtained via the city of Decatur.
Share

The Decatur City Planning Commission voted unanimously Tuesday night to recommend the city deny a developer’s request to build a community of 43 townhomes along Church Street near the entrance to Glenlake Park.

Citing several elements that were not in compliance with the city’s unified development ordinance (UDO), commission members said they could not recommend approval of the townhomes proposed by The Quarters, LLC, despite the developer’s attorney’s threats of legal action.

“I do not believe that this plan supports the general welfare of the community as it is in opposition to the UDO and the strategic plans that Decatur has prepared with widespread community input and support,” commission member Lori Leland-Kirk said when making the motion to recommend denial.

Among the issues cited by commissioners as non-compliant with the development ordinance were that a number of the units would not face a public street, instead facing the side or rear of the property, that some of the garages would face the street, which puts pedestrians at higher risk along sidewalks, and that the developer had not conducted a traffic study or had meetings with residents of surrounding neighborhoods to get their feedback. All of these elements are required by the current code.

However, attorney Kathryn Zickert, representing the developer, contended that the city is inappropriately applying the current version of the UDO, including requirements that were not in effect when the original preliminary plat of the project was submitted to Planning Director Angela Threadgill in April of 2017.

“We do not consider this a new application, though the city has required that we file a new application in order to come before [the Planning Commission ] tonight,” Zickert said. “Our application was in compliance with the requirements at the time it was filed.”

Although this is the first time the development proposal has come before the Planning Commission , it has been the subject of more than a year and a half of legal wrangling between the city and developer.

The developer has agreements to purchase nine single-family homes on the east side of the street from the lot immediately adjacent to the park entrance up to the Candler Grove townhome development. The total area includes 2.54 acres.

The houses currently on the property are single-family homes on individual lots, but the property was rezoned prior to 1988 to allow for medium-density residential development. Because the area is already zoned for higher density and would not require a rezoning application, Decatur’s development ordinance allows Threadgill to recommend approval of the application herself or forward it to the Planning Commission for approval at her discretion.

Two days after that submission in June of 2017, Zickert says the City Commission voted to amend the development ordinance to specifically require the changes that Threadgill previously requested.

The developer filed a petition for a writ of mandamus in DeKalb Superior Court in July 2017 to force the city to consider the application under the code that was in force when they originally submitted the plat, Zickert told Decaturish before the meeting.

Superior Court Judge Gregory Adams ruled in favor of the city and dismissed the developer’s petition. However, a subsequent appeal to the state Court of Appeals was heard by a three-judge panel which reversed Adams’ decision on October 28 of last year, she said.

“This application should have been ruled on more than a year ago,” Zickert told Decaturish. “This is not my opinion – it’s the opinion of the Georgia Court of Appeals. This is not a rezoning. We are simply asking for plat approval. We are asking for approval of a development which is consistent with similar townhome developments on Church Street.”

City Attorney Bryan Downs said at the meeting that Zickert is mis-stating and misrepresenting what the appeals court decision requires.

“The court ruling refers it back down to DeKalb Superior Court for determination,” Downs said.

The appeal panel found that the reasons Adams gave for dismissing the initial petition were not valid but did not rule on whether the city had to consider the development proposal or whether it should be considered under the 2017 version of the UDO.

For her part, Threadgill told the Planning Commission  the April 2017 submission was never an official application, but instead a “sketch plan” that was submitted without the city’s formal application form, payment of the application fee, or the required property owner authorizations that should accompany a final application submission.

Informal submission of such plans by developers is common and she often works with them, going back and forth over different elements, as they prepare a final submission for consideration, she said.

Threadgill admitted that there was a backlog in the planning department in June of 2017, which caused a delay in responding to several different development projects due to a staffing shortage.

In July of 2017, she told the commission she received a letter from Zickert demanding that the proposal be put on the Planning Commission  agenda for the next meeting.

“They had just missed the deadline for the August meeting, so I was preparing to tell her that they could be on the agenda for the September meeting, but that they would have to submit the final application, the fee and include the property owner authorizations,” Threadgill said. “Before I could communicate that, they filed the petition [for a writ of mandamus.]”

Threadgill also disputed Zickert’s contention that the city revised the development ordinance specifically to thwart The Quarters’ project. The city was already considering alterations to townhome requirements in the UDO in response to problems and complaints received regarding other developments, she said. She pointed to minutes of the February 2017 meeting where she informed the commission that there were elements of the code that needed revision.

“We are not against townhomes,” she added. “We have approved five different townhome developments since then, but they have to comply with the standards.”

Zickert rejected Threadgill’s explanation, saying there was no way that the appeals court would have ruled the way it did if The Quarters’ original application were not valid.

Commission Chair Harold Buckley said he believed that the application should be considered a new one because the procedure outlined in the zoning ordinance allowed for either Threadgill to make the determination or to forward to the Planning Commission.

Since she did not, he said that would mean that the original application was in the “administrative process” of getting Threadgill’s approval. This separate submission to the Planning Commission – with the application dated Dec. 17 – should be considered a new application and subject to the current standards, he said.

The other planning commissioners agreed, and, since the development did not meet many of the current requirements, asked Zickert whether the developer would like to defer the application to a later meeting, possibly making changes that would make it more likely to be accepted. Zickert responded that they did not want deferral.

She indicated during the meeting that, if the application was recommended for denial, they would pursue the matter in Superior Court.

In addition to the legal back and forth, about 30 nearby residents attended the meeting to express their opposition to the development, most citing concerns about the density, the traffic, pedestrian safety and water runoff issues.

Barbara Shirkey, who has a townhouse in the Candler Grove development, presented a petition with more than 500 signatures from area residents opposed to the development.

“If this is built, it will take away all of my sunlight. I would be able to lean out my window and borrow a cup of sugar from someone living [in the new development] and there would be a private sewer run just outside my home,” she told commissioners. “So, I am not a happy camper right now.”

Also attending the meeting, however, were eight of the nine property owners caught in the middle as the development plans lag.

Doug Peters, owner of 1019 Church Street, said that the property owners were entitled to have the development considered.

“We understand that there are a lot of people who don’t like more development,” he told the Planning Commission. “We respect that. But to deny this by disregarding the law is wrong.”

Tom Hills, owner of 1023 Church Street says the owners are caught in limbo while the dispute plays out. Most have vacated the homes and bought property elsewhere and are now having to absorb the cost of maintaining the homes they can neither sell or rent out long term.

“We have done it, but it is hard to find people who will do a short-term lease,” he says. “It is stressful and people are angry.

The city is violating their property rights and subjecting Decatur to costly and unnecessary legal fees, because any decision to deny will be reversed by the court, he believes.

“I think the way that they have conducted themselves is really disappointing and dishonest,” Hills told Decaturish. “I have always thought of Decatur as a model of open and good government, but this has really changed it for me.”

Consideration of the subdivision application now moves to the Decatur City Commission. It will be on the agenda at its next meeting on Jan. 22.

Zickert says she and the developer have a court date in DeKalb Superior Court for reconsideration of their petition on Jan. 28.