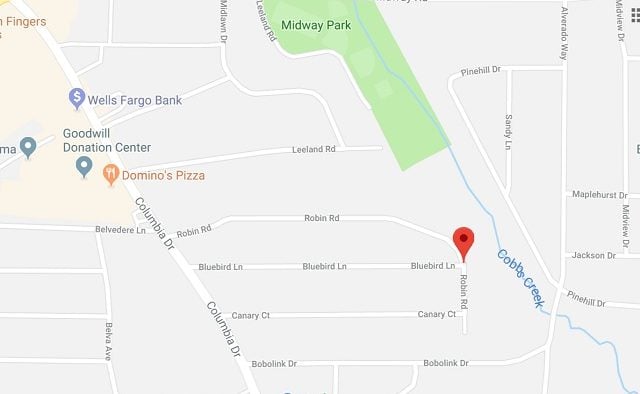 The approximate location of the Jan. 14 incident. Image obtained via Google Maps
Share

DeKalb County Police on Jan. 14 responded to a report of someone shooting out the window of a home in the 3200 block of Bluebird Lane in greater Decatur.

The incident happened around midnight. The home is not far from Midway Park.

According to a police report about the incident, a resident at the home told an officer he was lying on his living room couch when he heard eight to 10 gunshots outside of his home. One bullet hit the front window and the glass fell over the man while he was on the couch, cutting his head. He was treated for his injury at the scene.

A second victim who lives at the home told police she heard six gun shots. She said when she looked out her window, she saw an unknown man in all black. She said that her vehicle’s passenger side rear window and front windshield were shot and damaged. She also said she saw a silver pickup truck driving up and down the street the night before, which she said was out of the ordinary.

A neighbor told police that she’d heard the gunshots and said she’d called the police a few days before the incident because a juvenile in a house next to hers had a firearm. The witness does not live next door to the house where Jan. 14 incident occurred but lives on the same street.

Another witness told police he was walking nearby when the incident happened. He said he heard the shots and jumped into some nearby bushes for cover. He told police he saw a white SUV flee the street after the shots ended.

Officers recovered three shell casings outside the home, and a “partial projectile” in the second victim’s vehicle.