If Avondale Estates were to pursue its current annexation plan, it would be a cash boon for the city, a new study shows.

How much of a boon depends on the methods used to measure the annexation’s impact on city finances.

The Carl Vinson Institute of Government at the University of Georgia conducted the study. The area studied includes the Kensington MARTA station, long-coveted commercial property in the Rio Circle area and homes along Katie Kerr Drive. If the annexation were successful, it would increase the city’s population from 3,360 people to 7,932 people.

One method Carl Vinson used assumed that citizens and businesses in the study area are similar to those in city limits.

“However, we used unit measures that were tailored to the individual services,” the study says. “In other words, we used measures that attempted to capture service demands. For police, per parcel costs were the unit of measurement which best reflected the demand for services while for others, like public works, we chose miles of road as a better reflection of service demands. In the case of public works, which provides many different kinds of services, a single basis of measurement may not be particularly accurate, necessitating a more detailed analysis, such as the case study approach.”

Under that method, the annexation would generate an approximately $500,000 surplus for the city.

The other method Carl Vinson used involved interviewing department heads to determine the level and cost of service delivery to these areas.

“We interviewed department heads and asked them to consider their individual departmental budgets for FY 2017,” the study says. “We then asked them to project the effect the total annexation would have on their department’s budget, including personnel-related expenditures, operating expenditures, and equipment.”

Under that methodology, the surplus of tax revenue over expense of providing services to these areas would be $2.1 million.

Avondale city commissioners will discuss the annexation proposal at their Feb. 13 work session, which begins at 5:30 p.m. and will be held at City Hall, located at 21 N Avondale Plaza. All meetings are open to the public.

To see a copy of the feasibility study, click here.

Here is a map of the study area: 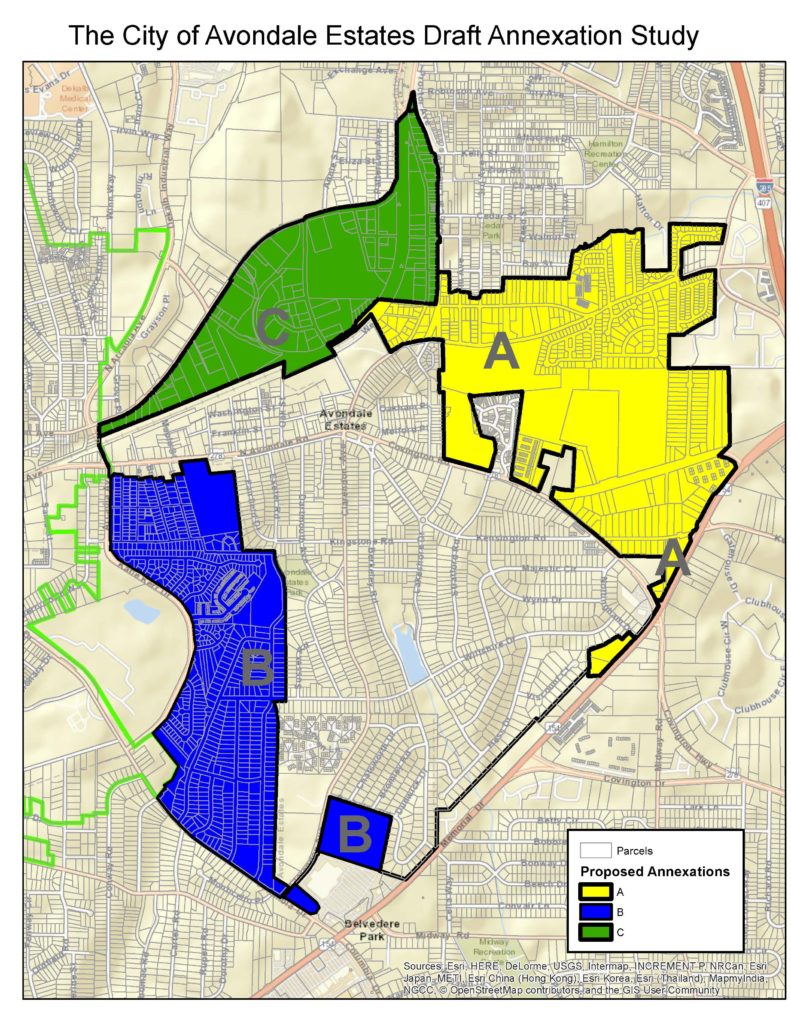 Image provided by the city of Avondale Estates.