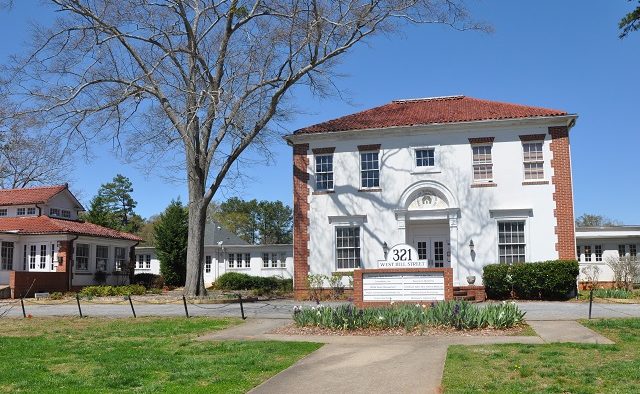 This story has been updated. Please take the time to read our editorial regarding this story.

While the sale was not discussed at the City Commission level, it was routinely discussed by the Decatur Development Authority, an arm of the city that owned the building, according to meeting minutes. The DDA holds public meetings the second Friday of each month at 8 a.m. at City Hall, located at 509 North McDonough Street.

Lyn Menne, who oversees economic development for the city and works for the city’s Development Authority, said the buyer is the Historic Scottish Rite Property Group, which includes Chris Martha, the owner of Scout restaurant located on the property. Other members of the group include David Decker and Fasil Muche. The purchase price was $1.75 million, Menne said.

The property appraised between $1.8 million and $2 million, she said.

“It should be pointed out that Scout Restaurant owners made considerable investment in renovating the west wing,” Menne said.

Scout became a tenant of the property in 2016 and the restaurant’s lease included a right of first refusal should the DDA decide to sell the property.

“A provision of the lease gave Mr. Martha a right of first refusal when the DDA decided to sell the property,” Menne said. “The DDA also moved forward to transfer ownership of the Solarium space to the Community Center of South Decatur as provided by the original sale of the property to PRI in 2000.”

Menne said as part of the deal, the DDA has a right of first refusal should the new owners decide to sell the property.

“DDA continues to have a First Right of Refusal on the property included in this sale and the Solarium wing now owned by the Community Center of South Decatur,” Menne said. “The entire property is designated as a local historic landmark and any proposed changes to the buildings are subject to the review and approval of the Decatur Historic Preservation Commission. The Scottish Rite property is also encumbered with Open Space, Landscape, and Access easements that protect and preserve the layout, accessibility, and connectivity of the property.”

Under state law, the DDA is not required to accept a public bid for the property meaning the DDA does not have to accept the highest offer for the property or market it to other buyers. Prior to signing the lease with Scout, the property attracted interest from other prospective tenants, Menne said. It is not yet known who the other potential tenants were.

“Several groups looked at the space – most of them restaurants since it was already built out as a restaurant,” she said. “The property was in very poor condition. The previous tenant had removed all of the fixtures and appliances when they vacated the space well before we began discussions to purchase the property. The owners of Scout were the only ones who presented a lease.”

The closing was finalized on Feb. 20. Decaturish first learned of the sale when it received a copy of an email sent to other tenants of the Scottish Rite building. But people involved with the deal say the sale was common knowledge and had been discussed at length during DDA meetings. The minutes support this.

“The DDA minutes reflect the board’s discussion of the purchase and the fact that this was intended as a short term action to stabilize the property and sell it,” Menne said.

She said that rental income from the property “barely covered” the DDA’s costs of the bond payments, property management and maintenance. In 2016, the DDA asked the City Commission to help with a debt payment on the building.

The city bought the property for $1.45 million in 2014 paid for with a bond issued by the DDA. Before the DDA bought it, the property was facing the possibility of foreclosure.

The total bond was $1.785 million amortized over 15 years, with a two year call option to allow the DDA to pay off the bonds early. Menne said the decision to sell the property saved taxpayers money in the long run.

“Had we held the property for the life of the bonds, we would have paid over $770,000 in interest payments alone,” Menne said. “Weighed against paying off the bonds and returning the property to the tax rolls, selling the property as intended made the good economic sense.”

Scottish Rite played an important role in the redevelopment of Oakhurst. The rehabilitation of the former convalescent hospital in the early 2000’s was a catalyst for the neighborhood’s gentrification. The building’s east wing, the Solarium, plays host to community events and was purchased by the Community Center of South Decatur a year ago.

Back in 2002, Progressive Decatur, a subsidiary of Progressive Redevelopment Incorporated, signed a lease with Community Center of South Decatur, the group that had been working to save Scottish Rite since the 1970s. Other records obtained by Decaturish.com show that over the years Community Center chafed under that arrangement. There were disagreements about who had the responsibility for making repairs to the structure under the terms of the lease. One of those disagreements sparked a lawsuit against Progressive Redevelopment filed by the Community Center of South Decatur. The city’s purchase of the property resolved the lawsuit.

Mark Sanders, a board member of the Community Center of South Decatur, said it was his understanding that the city always intended to sell the Scottish Rite property.

“My understanding when the city acquired it in 2014, is it would be a temporary thing to bridge it until they could find a buyer,” he said. “This is not something I’m worried about at all.”

Correction: An earlier version of this story used a photo of the Solarium. That property was purchased by the Community Center of South Decatur a year ago and is not affected by this sale.