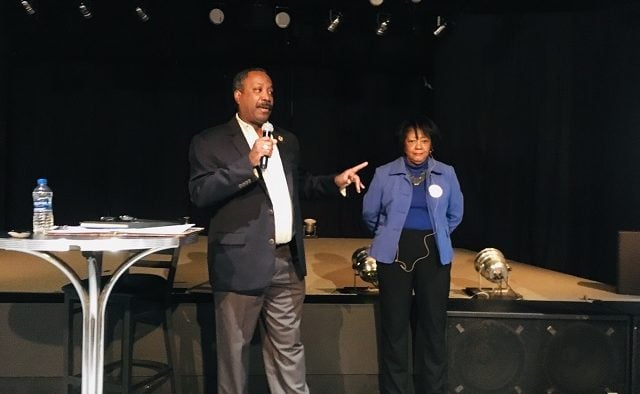 Concerned Citizens in Opposition to Greenhaven, DeKalb Strong, and Neighbors Against Greenhaven held a coordinated public meeting on February 26, 2019 at Rehoboth Baptist Church.

The meeting was in response to the two most recent cityhood proposals which are currently seeking sponsors in the state legislature, one for Greenhaven and one for Vista Grove.

Vista Grove incorporates most of the area included in the LaVista Hills referendum which was rejected by voters in 2015. Previous proposals for Greenhaven failed to pass the legislature in 2015-16 and 2017-18.

“This is year five. Why do they keep coming back?” asked Claudette Leak of Concerned Citizens in Opposition to Greenhaven. “There are financial incentives for developers and contractors, but a substantial increase in costs for residents, renters, property, and business owners.”

Cityhood proponents say they are looking for representation closer to home and cities are more responsive to residents.

“While the population of the metro area skyrockets, our physical infrastructure continues to age,” the Vista Grove Initiative website says. “Vista Grove needs a comprehensive, long-term plan to prepare for the future, and locally-sourced leadership to ensure implementation. The cities around us – Tucker, Brookhaven, Chamblee, and Doraville – prove that locally tuned, citizen-driven planning and clear action lead to consistent improvement, civic identity, and unified effort.”

b.  Forming the proposed city of Greenhaven represents an opportunity to move to a culture of productivity and service excellence that has not been provided by the county to south DeKalb.

c.  A city structure such as Greenhaven will be more accountable to its citizens than the county structure where 4 Commissioners and the CEO (the majority of our elected leaders) make decisions about an area in which they do not live.

d.  Not least, the current situation has residents in unincorporated DeKalb subsidizing citizens in cities elsewhere within DeKalb County.

Greenhaven proponents say opposition to their efforts are rooted in racism.

The Greenhaven advocacy website asks, “What’s stopping GA’s Residents from starting a city that happens to be 87 percent Black?”

Leak pointed out that the new cities formed in DeKalb since 2002 typically contract out administrative functions to private corporations.

According to Marjorie Hall Snook of DeKalb Strong, the administrative costs of cities like Brookhaven are increasing year by year as a percentage of the city budget, and that for Stonecrest administration represents 48 percent of the budget.

“There’s no magical pot of money,” said Snook. “An extra layer of government is going to cost money, and if government is costing more money, it’s coming from you.”

The proposed boundaries of Greenhaven would encompass most of unincorporated central and south DeKalb. It would abut the existing boundaries of Atlanta, Clarkston, Avondale, Stone Mountain, Tucker, Lithonia, and Stonecrest, and would completely surround Pine Lake.

“We would be absolutely land-locked by Greenhaven in their current configuration,” said Pine Lake Mayor Pro Tem Jean Bordeaux.  The proposed boundaries would prevent any growth for DeKalb’s smallest city. “We’ve looked at expansion, and that’s a possibility in the future, but we don’t want to be pushed into something by Greenhaven.”

“Greenhaven would include 295,000 people. That would make it the second largest city in the state of Georgia,” said Daniel Walker of Neighbors Against Greenhaven. “However, it would only have three services. Not police, not fire, not 911, not schools.”  Greenhaven would provide code enforcement, zoning, and planning.

Both Claudette Leak and District 5 County Commissioner Steve Bradshaw raised concerns that proponents of Greenhaven were incorporating nearly all of unincorporated DeKalb County in the city while focused primarily on south DeKalb.  “Are they just going to ignore the rest of it?” asked Leak.