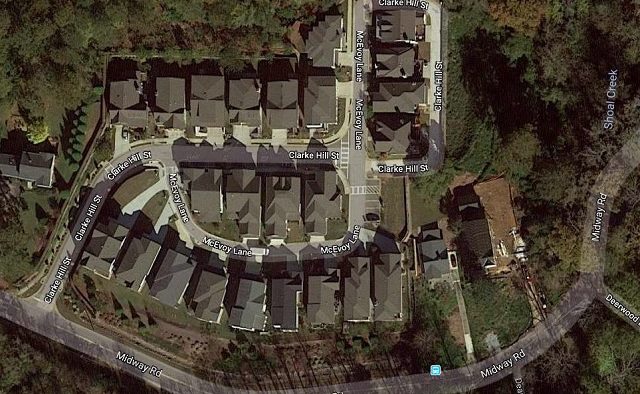 An aerial view of the Clarke Hill subdivision.
Share

At its regular meeting Tuesday night, the Decatur Planning Commission recommended approval of a revised final plat for the Clarke Hill subdivision off Midway Road almost a full 12 years after construction first began, despite significant differences between the plan approved by the city in 2007 and the resulting — now almost fully occupied — neighborhood.

The Clarke Hill subdivision, formerly known as Midway Commons, consists of 25 single-family homes and two internal private streets on 8.47 acres on the north side of Midway between Candler Road and Deerwood Drive. Of the almost nine acres of subdivision, just over three acres have been preserved as a natural conservation area. The development received preliminary approval from the city on March 5, 2007, with the stipulation the developer comply with a list of conditions for final approval.

Since that time, the development has undergone many changes, including a change of developer and builder just after construction started, Okera Handshaw, president of the Clarke Hill Homeowners Association, told the Planning Commission.

“The original builder stopped construction after the first four houses and a new builder, Domain, took over and everything changed,” Handshaw said. “None of that is written down in our (HOA) bylaws and we don’t have documentation. It is just more of an oral history from the initial residents of what promises were made to us about what was going to get built and then what did get built that might explain why it looks different from what was approved in 2007.”

The HOA was prompted to try to get the city to approve a revised plat for the subdivision after the developer — who still owns three of the houses — began the process of installing a sidewalk along a small section of McEvoy Lane that did not have one.

One of the conditions for the subdivisions approval were placement of sidewalks along all streets, in keeping with the requirements of the city’s unified development ordinance.

“Most of the houses have significant hard landscaping of their yards, and the yards are already very small in that area,” Handshaw said. “You can’t park along McEvoy Lane there and parking in the driveways would frequently block the sidewalk, if it had been built there.”

Communications with the builder — who lives out of state — indicated that the HOA would have to get city approval to complete the subdivision without the additional sidewalk, which most residents along that section of road do not want.

However, commissioners seemed to feel the absence of a sidewalk on a small section of private street was a mostly minor issue, given the many other significant differences between the preliminary plan approved in 2007 and the current one.

“We are in a bit of a difficult situation because the plan looks so completely different, but the neighborhood is mostly completed,” said Mike Travis, acting commission chair.

The existing development has fewer houses than planned, but contains a new road and houses located at different parts of the property. Further, one of the conditions for approval called for a minimum separation of 10 feet between houses, and many of the existing homes are separated by as little as six feet.

The developer was also supposed to work with the surrounding neighborhoods to help fund and implement traffic calming measures along Midway Road, and that has not been done.

Planning Director Angela Threadgill said the development of the subdivision predates her employment with the city and she could not explain how it could have been almost completed with so many deviations from the approved preliminary plan.

“It is customary in developments of this kind for the city to withhold the issuance of the certificate of occupancy for the final house pending final plat approval,” she told the Planning Commission. “In other developments like this (that the city has approved), the approvals are in phases. So, part of the development would be Phase 1 and that would be approved and COOs issued, then they would proceed to other parts of the development in Phase 2 or 3.”

She recommended that commissioners decide whether they could recommend approval of this final plat, but set specific further conditions that must be met in order for the developer to get the certificates of occupancy for the final three homes that remain unsold.

Ultimately, the commissioners decided to recommend the city hold the developer to the conditions that would affect the larger community, such as the funding and support for traffic calming on Midway, removal and control of overgrown ivy in the conservation area, and use of exterior light fixtures and street lighting to reduce light pollution. They did not feel the homeowners should be forced to comply with placement of a sidewalk after the fact.

“Certainly we are not going to make anyone tear down their house (due to deviation from minimum distance conditions),” Travis said.

Commission member Gregory Chilik also noted that the development ordinance requirement that new streets be constructed with sidewalks was designed to benefit, not burden, residents, by providing safe pedestrian access to their dwellings.

“If we are force something on the residents that will diminish the use of their property and diminish the enjoyment of the neighborhood, then that is sticking to the text of the ordinance but violating its intent,” he said.

Commissioners voted unanimously, with commission chair Harold Buckley absent, to recommend approval of the final plat, attaching the remaining unmet conditions to the issuance of certificates of occupancy for the remaining three houses.

The Decatur City Commission will consider the approving or denying final approval of the development at its next meeting on Monday, February 25.