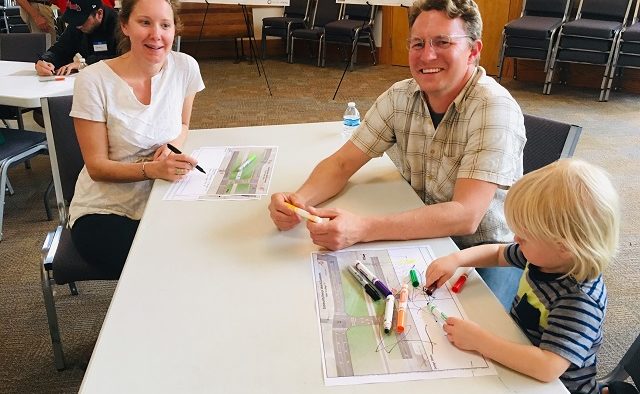 The city of Decatur held the third and final public workshop on improvements to the Atlanta Avenue intersection on Feb. 28 at the Atlanta Friends Meeting House.

The city held the first workshop November. Those suggestions were combined with similar feedback from the city of Decatur, the Georgia Department of Transportation, CSX railroad, Decatur Police, emergency services, and other stakeholders to produce a set of designs that were presented to the public for evaluation in January 2019.

Bruce Landis, of the civil engineering firm Landis-Evans & Partners, said analysis of  the proposed fixes included a traffic simulation based on observed vehicle, bicycle, and pedestrian traffic patterns at the intersection. Designs were evaluated based on public and stakeholder opinion, delay at the intersection for vehicles, amount of pedestrian detour, and cost.

“I don’t have a clear favorite,” said Jennifer Wilson, who attended Thursday’s meeting. “I think any of them would make it safer than what it is now. We bike and walk and run Flint to Soulshine [Daycare] regularly, and my only suggestion is that they figure out how to make the north side sidewalk safer too, and make sure there’s a way to safely cross over.”

“I won’t speak for our whole street, but definitely my wife and I feel this is better,” Henderson said. “Hopefully it will eliminate the confusing signage.I can appreciate that it’s hard to find a perfect solution for everybody, but this is going to be better than what we have.”

When asked about her specific design suggestions, Henderson said,“So long as there are enough sidewalks and bike paths to get around, I’m good. Can they get rid of those crazy colored planters?”

Decatur residents can continue to offer comments and ideas about the proposals on Open City Hall until March 14, 2019