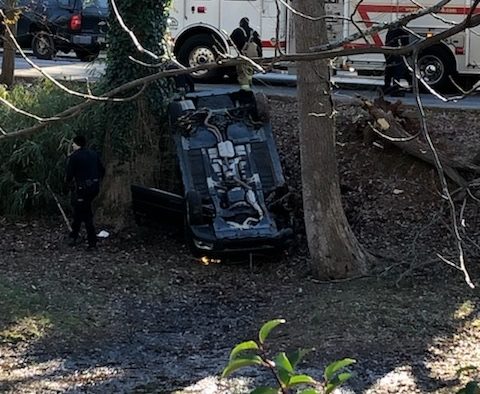 This vehicle flipped into a ditch in front of College Heights Early Childhood Learning Center on Wednesday, Feb. 13. Photo provided to Decaturish.
Share

An accident involving a driver accused of driving under the influence prompted questions from readers about how Decatur Police handled it.

A Decatur Police spokesperson said officers did not arrest the suspect because waiting for her to be released from the hospital would’ve tied up police resources.

The accident occurred in front of College Heights Early Childhood learning center on Feb. 13 at around 4:30 p.m. in the afternoon.

The driver, identified as 47-year-old Catherine Rideout of Atlanta, flipped her green Subaru Forester after hitting a utility pole. According to police, “The vehicle was traveling northbound on South McDonough Street [at Garland Avenue] when the driver lost control of the vehicle, left the roadway and struck a utility pole and tree. The vehicle overturned and came to rest on its roof.”

Attempts to reach Rideout for comment were unsuccessful. She wasn’t injured and the accident didn’t injure anyone else.

What happened following the accident led to questions from readers. According to the police report, Rideout got out of the vehicle and was sitting on the ground 10 feet away. According to the police report, the vehicle smelled of alcohol and Rideout was also accused of showing signs of intoxication. Rideout allegedly told officers she’d had “a few glasses of wine” earlier in the day, according to the report. Police claim she consented to a blood test. She was transported to Atlanta Medical Center for evaluation.

Police did not arrest her when she left the hospital and she was instead given a copy of the charges. Police charged her with DUI and failure to maintain her lane.

Readers wanted to know why she was not arrested after leaving the hospital. As a point of comparison, Michelle Wierson, a suspect in a fatal DUI wreck that occurred in September, was taken to jail after being released from the hospital.

Police Lt. Jennifer Ross said officers have the option of releasing someone “on citations” in cases where the driver is suspected of driving under the influence.

“When we have someone in custody on traffic charges or low level misdemeanors and they have been in an accident or are complaining of injury, we can do what is called ‘releasing them on a copy of charges,’ meaning they have been charged with an arrestable offense but were released on citations,” Ross said. “The jail will not take someone complaining of injury or who has been in a recent accident without hospital clearance anyway.

“If someone is in custody for something more serious and they are transported to the hospital, we must have an officer stay with them until warrants can be obtained and custody is taken over by the Sheriff’s department. It is a process that sometimes ties up our patrol officers through multiple shifts. We did not have the same type of charges pending against the driver in the recent single car accident on South McDonough Street that we had in the Wierson case.”

Ross added, “When the case goes to court, the Judge will see the defendant was not booked into the jail upon arrest and will address any mandatory jail time during sentencing if they are found guilty.”