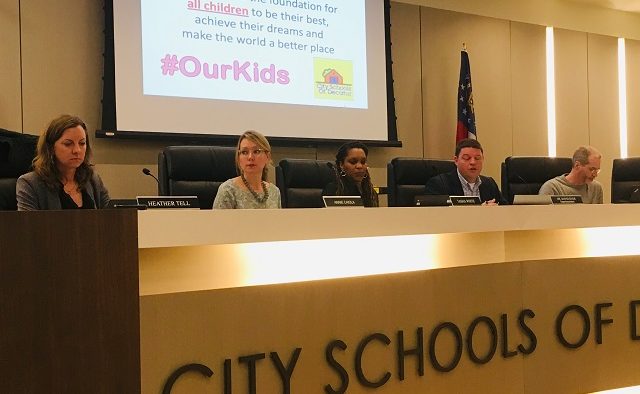 The City Schools of Decatur Board of Education held its regular public meeting on February 12, 2019 at the M. Elizabeth Wilson School Support Center on Electric Avenue.

During public comment, Attorney Mawuli Davis, chair of Beacon Hill Black Alliance for Human Rights, read part of a letter sent to the board which raised concerns about incidents at Renfroe Middle School. According to Davis, some 7th grade students were told they could not attend a Black History Month African dancing and drumming performance in the cafeteria on campus without a permission slip; in another incident, other students were told that they could not participate in the Culture of Caring service days off-campus because “they might misbehave.”

Superintendent David Dude responded by saying that he began investigating the incidents as soon as he received the letter.  According to Dude, the first issue had been dealt with internally by staff and no students were prevented from attending the performance.  His investigation of the second incident has not been concluded.  Dude said, “I have no problem when we do something wrong for us to be called on the carpet for it,” but expressed frustration that no time was allowed for an investigation before it was made public.  “We are trying very hard to work with everybody who is involved in this issue.”

School Board member Tasha White said, “It is sometimes frustrating when the community doesn’t think we are doing what we are supposed to be doing.  But I am also on the other side of this, being the only African American school board member and being a community member and being a parent.  The frustration that you’re feeling is one that we feel every day for all of our kids. For African American parents it’s beyond frustrating, it’s painful.”  She added, “Please know that the goal of everybody sitting up here is to make it better.”

For the Spotlight on Winnona Park Elementary, 3rd graders Anna England, Charlie Morlini, Trini Romero, and Lucy Duncan led the meeting in a “mindfulness moment.” As part of the mindfulness program run by teacher Kara Morrison, students learn how to lead other students in a mindfulness and gratitude exercise.

Assistant Principal Wes Hatfield and Social Studies teacher Melissa Frey discussed a last-minute opportunity to take six students from Decatur High School to Japan during spring break, as part of a program through the Georgia Council on Economic Education and the Japanese Society of America.  One of the schools originally selected to participate had to withdraw, which made six slots available.  Those slots were offered to Decatur High School because of Frey’s previous work with the GCEE.

“The great thing about this trip is that other than two meals at the airport and souvenirs, the trip will be completely free for students,” said Wes Hatfield.  “Because of that, it was really important to us to live our district mission of providing equitable opportunities.”

Students will be selected from freshman Civics and Economics classes who have shown aptitude for and interest in economics and who have not traveled internationally with the school system recently.  At least three will be participants in the free and reduced lunch program.

Dianne Thompson, Student Success Coordinator, discussed updates to the school system’s child abuse prevention program, both in terms of consistency across the school system and compliance to recent changes in applicable laws.

The program she chose, “Think First, Stay Safe,” is an evidence-based program recommended by the Georgia Sexual Abuse and Exploitation Technical Assistance Resource Guide.  It addresses both sexual abuse and sexual assault and has developmentally appropriate information for every grade level.

Dr. Maggie Furhman, Executive Director of Schools, gave an update on the new system-wide behavior management system. Principal Billy Heaton reported on the building progress of the new Talley Street Upper Elementary school.  Both will be ready for the 2019-20 school year.

Board Member Tasha White will be running for re-election this year.

She said, “I’m excited to run again.  When I first ran I thought that four years was a long time but now that I’m in the thick of some of the things we’re looking at I realize that I need more time to be involved and be able to see it through. I think I wouldn’t be done if I didn’t run again.  If my community will have me, I would love to do it again.”