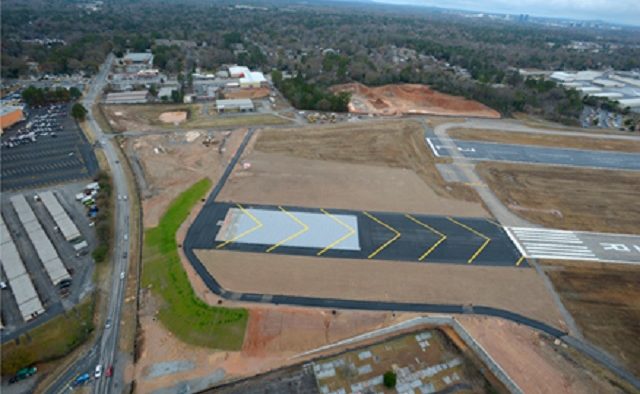 The gray area inside the black asphalt area is the new EMAS technology on Runway 3R-21L at PDK Airport. Photo provided to Decaturish.
Share

The DeKalb Peachtree Airport recently installed a new aircraft stopping safety system, which “is first of its kind in Georgia,” according to a recent press release.

This new safety system is called the Engineered Material Arresting System (EMAS), which is designed for emergency landings.

“EMAS technology uses a series of crushable blocks to decelerate the speed of an aircraft during an emergency overrun,” the press release says. “EMAS technology is placed 200 feet off the end of a runway to prevent an aircraft from running off the runway.”

According to the press release, the system is used in cases where there is “limited land” like PDK’s 6,100-foot primary runway for corporate customers.

“The EMAS technology was designed and implemented to improve safety for flights using this runway,” the press release says.