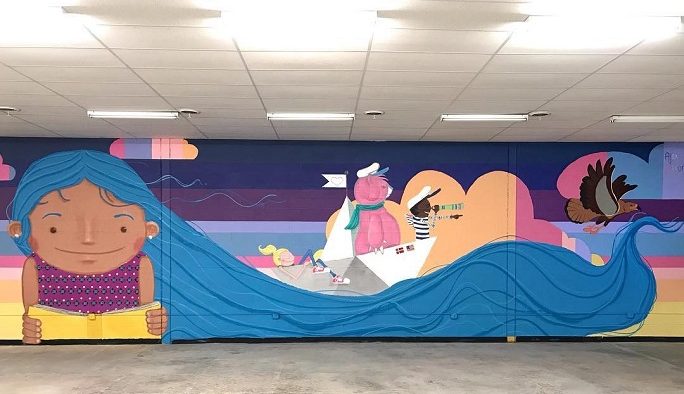 A local mother and entrepreneur, Christine Christensen, is opening a community space for families with young children in Decatur.

Called HavenHyggeHouse, the community space will offer a place for children up to 3 years old and their parents to have fun and interact with other families. As the name suggests, the community comes in part from the idea of hygge, the Danish word for a cozy, conscious, quality way of living, according to Christensen.

“Imagine a huge living room where your baby or toddler can roam free without you having to constantly worry and monitor their moves to avoid them being hurt or breaking something,” Christensen said.

Christensen, a Danish woman who has lived all over the world, came up with the idea for HavenHyggeHouse after her own experience with motherhood. After having a daughter, she felt “lonely and disconnected with all my most important support people ‘living’ in my phone,” she said.

At one point, she and her family moved to Sweden, where they visited a place similar to HavenHyggeHouse, and her life changed.

“All of a sudden we were a part of the local community because we casually met parents at the space,” she said. “These parents we would then recognize on playgrounds, in grocery stores, and so on. I have worked as a birth doula in Denmark, and I often saw how lonely, lost and disconnected new parents became. And most importantly, I have felt this loneliness myself.”

Christensen hopes to help parents experiencing loneliness or stress by offering a strong community space for them where they can safely and calmly interact and learn more about parenting. As part of this effort, Christensen encourages parents to engage fully, without phones, shoes or other distractions.

Families can purchase a monthly membership to HavenHyggeHouse for $120 a month per family, which allows families to use the space at any time during opening hours. If a family has two children under the age of 3, they can bring both for one membership price, but one adult can never be responsible for more than two children at once, Christensen said.

Additionally, the membership means the child or children can be accompanied by any adult the parents designate to watch the children in order to accommodate families with changing or unknown schedules.

HavenHyggeHouse’s normal opening hours will be 9:30 a.m. to 3 p.m. every weekday, although these hours may expand in the future. For now, weekends are open to rentals, parties and other events that support the community.

During weekday hours, “no classes or specific activities are on the agenda, encouraging parents to follow the development of their child and allow the children to explore and grow socially, while being encouraged by the awareness and attention of the parents, grandparents, or other adults,” Christensen said.

Ultimately, Christensen believes the HavenHyggeHouse is a unique space for parents to unwind, for children to explore and for families to bond, especially in a place and time where many relationships are strained.

“Where does one go in Atlanta with a crawling child? There literally are no places where a child can roam freely, safely, without the parent constantly watching like a hawk, saying ‘Don’t touch that, don’t eat that, dirty! Careful!'” she said. “We are basically teaching our children not to trust their bodies. We are teaching them that their surroundings are dangerous and not to be explored. At HavenHyggeHouse, a child can explore on its own, with no chance of getting hurt. We don’t use flashy toys, no plastic, and [we have a] calm atmosphere.”

The 2400-square-foot space, which is located in the ACME building at 533 W. Howard Ave. Ste. B in Decatur, will open Monday, Feb. 25. Before then, there will be an open house and ribbon cutting ceremony with Decatur Mayor Patti Garrett on Feb. 23 from 10 a.m. until 1 p.m.

Editor’s note: Following the publication of this article, the owner contacted Decaturish to say she had lowered her prices. This article has been updated with the new pricing information.