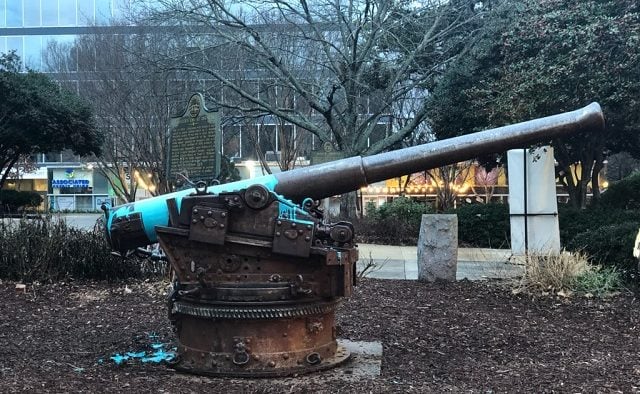 Vandals have once again targeted the Confederate monument in the Decatur square and they appear to have directed their ire toward artifacts that had nothing to do with the Civil War.

On Sunday morning, police took a report that the Confederate monument and two nearby cannons were damaged with paint. 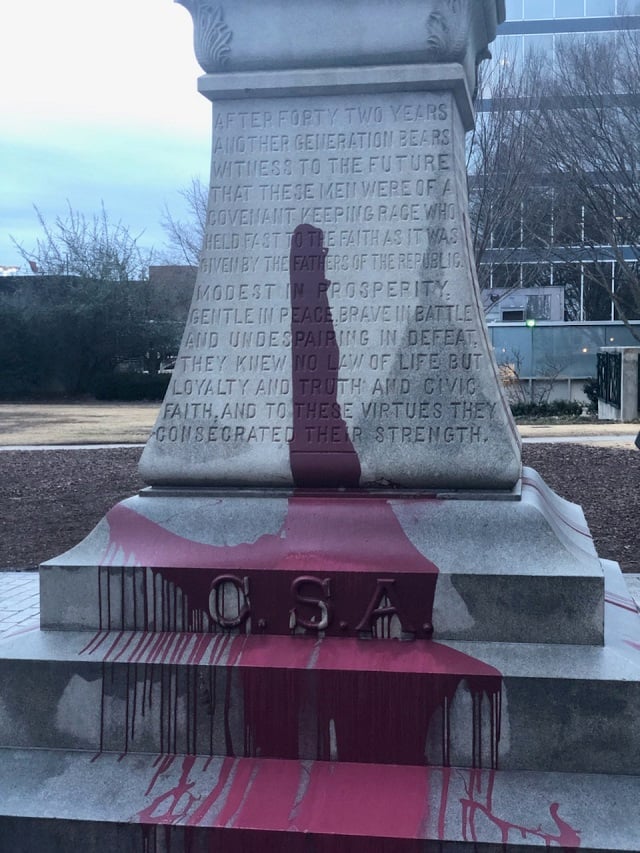 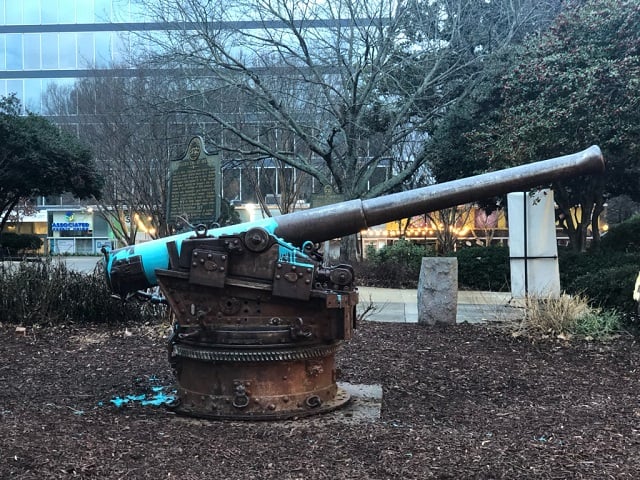 Photo provided to Decaturish. The cannon in this photo is a World War I-era artifact. 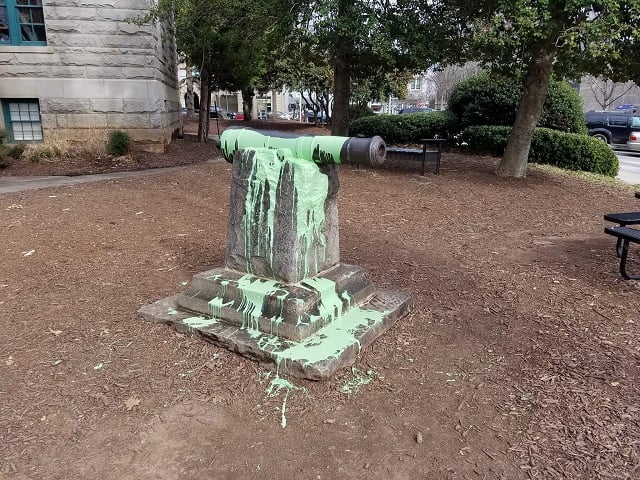 Photo provided to Decaturish. This cannon was used in the Creek War of 1836.

The Confederate monument has been a frequent target for vandals ever since members of the public organized an effort to remove it from the Decatur square.

Georgia law prohibits removing these monuments, but an attorney for DeKalb County believes the law allows for the monument to be moved as long as it isn’t obscured. The Decatur City Commission has also passed a resolution calling for its removal.

The monument is located by the old DeKalb County courthouse and was constructed in 1908. It is widely seen as a symbol of the Jim Crow era south, a not-so subtle message to black residents who would question the status quo. The future of the monument has been hotly debated since a violent white supremacist rally in Charlottesville, Va in 2017 that resulted in the deaths of three people.

So far, the effort to remove the monument hasn’t produced any results. The monument remains standing.

But that doesn’t explain why vandals targeted the other cannons.

According to the DeKalb History Center, the larger of the two cannons was manufactured in 1897 by German manufacturer Friedrich Krupp AG Hoesch-Krupp, in Essen, Prussia. It was used on a gunboat in the German imperial Navy. The gunboat was stripped and the weapons were fitted on a civilian ocean liner, the SS Prinz Eitel Friedrich, according to the History Center. The ship eventually wound up in what was then a neutral port in Newport News, Va. When the U.S. entered World War I in 1917, the U.S. Navy seized the ship, refitted it with U.S. weapons and re-christened it the USS DeKalb. The ship was eventually scrapped in 1934. At some point the Navy gave one of the guns from the Prinz Eitel Friedrich to DeKalb County, according to the History Center. The cannon was placed in its current location near the old county courthouse.

The smaller of the two cannons was used in the Creek War of 1836 according to local historian Mark Pifer.

According to Pifer, the Creek War was, “The last bit of resistance by the Creeks against being removed by the US.”

Calling it a “war” is a stretch, Pifer said.

“In this ‘war’ — not really a war, but a conflict of resistance — the Creeks killed some people who were trespassing on Creek land in Roanoke, Ga. that’s now under a lake,” Pifer said. “Since it was over the border from Alabama into Georgia, the governor called out all of the Georgia militias. Decatur had been founded by that point so they sent the Dekalb County troops down and they brought the cannon with them. The Dekalb cavalry had one engagement where they met the Creeks and fought. Six Decatur residents were killed in two different fights.”

Pifer said the cannon was popular back in its day.

“After they brought the cannon back, it was used in many Decatur celebrations,” he said. “They would fire it on the 4th of July and occasionally at a wedding or some other big event. It was stolen after the election of Jonathan Norcross as Atlanta’s 4th mayor in 1851 and stationed pointing at his store as a threat to tell him to leave town. During the Civil War, it was buried somewhere in town to prevent Sherman’s army from stealing or destroying it.”