Building a Legacy: A look at what Decatur has done with the old United Methodist Children’s Home property

Building a Legacy: A look at what Decatur has done with the old United Methodist Children’s Home property

The city of Decatur made a $40 million investment back in 2017 when it voted to buy the former United Methodist Children’s home property. More than a year later, a master plan is in place, the property has been renamed Legacy Park and the work of transforming the former orphanage is just beginning.

Decaturish spoke with city officials to find out what has been going on with the property and learn what kinds of things the public can expect to see there in the near future.

Though major construction at Decatur’s Legacy Park may still be years away, the city is already making good use of its acquisition of the 77-acre property.

Local nonprofits Global Growers, the AJC-Decatur Book Festival and the Decatur Education Foundation have all moved their offices to space at the former United Methodist Children’s Home property. Several of the cottages at the site will temporarily house families from the Swanton Heights apartment complex while that development undergoes renovation by the Decatur Housing Authority. And the Decatur Youth Council just launched one of the key elements of the city’s comprehensive plan for the park by planting blackberry bushes, and pear and apple trees to serve as the basis of the park’s new orchard.

“We are excited about having more activity there and the opportunities that presents,” Decatur Mayor Patti Garrett told Decaturish. “Our Department of Children and Youth Services is also [based] there and there are plans to do some fun things there with summer camps this year.”

The city is still in the process of establishing a separate management board or foundation to oversee day-to-day operations at the park, and one would need to be in place before more longer term leasing of available office space could happen, she added.

“The groups that are there now, are ones that we have been partners with before,” she explained. “There is a lot of interest from other groups in the space available there. But I think we would need that other entity in place — and to see what renovations or other changes might be needed–before we could enter into longer-term leases. It was part of the comprehensive plan to have that kind of management in place and not have each leasing agreement need to come before the commission.”

The Swanton Heights buildings are scheduled to undergo extensive renovations over a two-year period beginning this summer and continuing through the summer of 2021, Faust said. The authority plans to have residents relocate in groups, as their units are renovated, to minimize disruption to the community. He anticipates the relocations to occur in three phases of four to eight months each.

“These 10 homes located in close proximity to Decatur would provide an excellent relocation resource for many of DHA’s resident families during the rehabilitation process,” Faust told Decaturish. “We would want to provide residents with temporary housing that is as close to their current homes, schools, jobs, and families as is possible.”

Under the agreement with the city, the DHA would renovate, maintain and manage the properties for the duration of its rental period. At the end of the period, DHA would remove any appliances that it furnished to the dwellings but the city would then resume control over the renovated buildings.

“As a housing authority, DHA has extensive experience in the construction, rehabilitation, management, and maintenance of single family and multifamily housing,” Faust said. “As the properties currently provide no income to the city, and  are not yet in 100 percent condition to be utilized as rental properties, it was proposed that DHA undertake the work necessary to bring the units into leasable condition. This would include initial cleaning, painting, repairs, and related issues.” 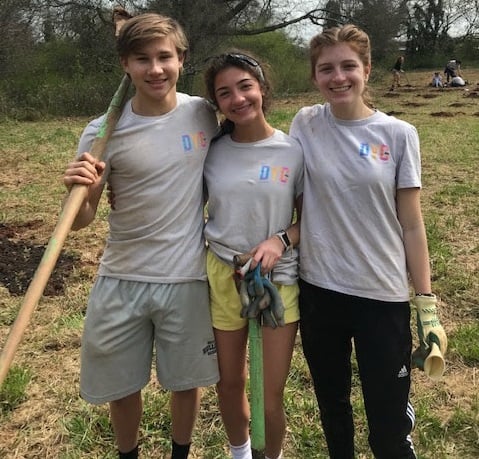 Consistent with the comprehensive plan developed by the city, the park will have an orchard along the north side of the property.

This past Saturday, the Decatur Youth Council and a group of volunteers from Decatur High School gathered to plant 25 blackberry bushes, 19 pear trees, and 14 apple trees obtained through the Atlanta Local Food Initiative.

The city obtained the trees through a grant from AFLI and the youth council will be involved in the initial planting and care for the trees, Mayor Garrett said. Long term, Global Growers will be in charge of maintaining the trees and bushes as part of their expanded orchard project.

The orchard honors the original use of the land by the United Methodist Children’s Home, which purchased the land in 1873 for use as a residential home and farm to support children orphaned by the Civil War and, later, those who were displaced from their families due to economic hardship and other reasons.

Forty-two of the trees will be planted in honor of the original 42 children who were residents at the home, said Garrett.

The city is also working with the Decatur Arts Alliance to raise funds for a permanent sculpture and public artwork to honor former City Manager Peggy Merriss, who recently retired after 35 years with the city.

“We are not sure exactly where it will be, but it will be a prominent place within the park,” said Garrett.

Merriss was a strong supporter of public art and art projects during her tenure as city manager.

As the city moves forward with its own mission for the former children’s home property, UMCH itself is moving forward with a new name, following its relocation to a facility in Tucker after the sale of the Decatur campus.

“As we look toward our future, we are proud to take on a new name that reflects both our tremendous growth and our unlimited potential, while preserving our deep foundations in The United Methodist Church,” the organization’s CEO, Rev. Hal Jones, said in a statement posted on its website. “To be well-rooted is to be firmly planted, to feel stable, and to feel taken care of and secure. To be well-rooted is to have the support and love you need to become the person God intends for you to become.”

The change reflects the organization’s ability to shift to the changing needs of the children and families it serves, while remaining committed to its core mission, the statement said.

Annexation into the city

The city will begin the process of formally annexing the park at its upcoming Planning Commission and City Commission meetings, Decatur Planning Director Angela Threadgill said.

Annexation into the municipal boundaries will require a local act of the state legislature that will include the park property as well as certain individual properties on Derrydown Way, Katie Kerr and S. Columbia Drive.

The local bill that would allow Decatur to annex the properties is currently under consideration in the state House of Representatives.

Annexation requires that the properties in question have a land use category and zoning designation under the municipal codes, rather than their current county designations. The city Planning Commission will consider recommendations for the appropriate land use and zoning changes at its upcoming meeting on March 12, with the City Commission considering the resulting recommendations at its next meeting, March 18.