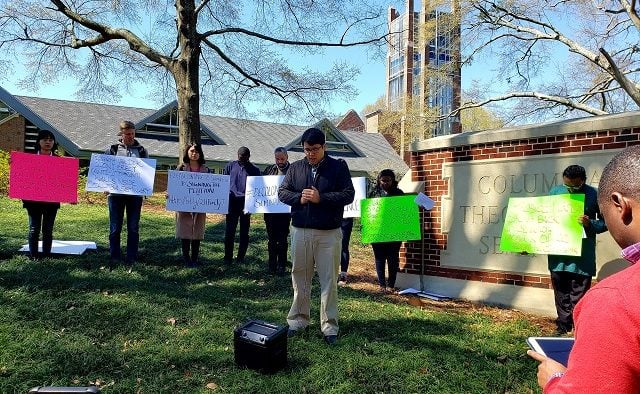 Members of the Coalition of International Students and Allies (CISA) at Columbia Theological Seminary pray following a press conference on March 20. Photo by Dan Whisenhunt
Share

Columbia Theological Seminary boasts a large international presence among its 300 students. The seminary reports that students from 16 different countries are enrolled there.

Helen Kim Ho, an attorney working with the students, said, “Every Korean American minister I know has some connection to Columbia.

They’ve formed the Coalition of International Students and Allies (CISA) at Columbia Theological Seminary and held a press conference on Wednesday, March 20, to state their case, to protest and to pray.

When contacted for comment, Columbia Theological Seminary didn’t directly address the decision to close the Office of International Programs.

A spokesperson said, “Columbia Theological Seminary remains deeply committed to our international relationships with students, staff, faculty, and partner institutions. Recently, after three years of community-wide dialogue and exploration that revealed significant issues with our administrative structures, we have drastically enhanced our support of students with additional staffing, increased financial support, and new initiatives. More information is forthcoming.”

Students who spoke on Wednesday said they felt left out of that dialogue and ignored by the administration.

Jung Ha Kim, a professor at Georgia State University and member of the Pacific, Asian, and North American Asian Women in Theology and Ministry association, said she was “heartbroken” by the school’s decision.

“I feel proud to stand with CISA for exposing the hypocrisy of institutional racism,” Kim said.

In a petition online that drew more than 650 signatures, CISA proposed some solutions to address their concerns:

– The reinstatement of the Office of International Programs;

– That the Director of the Office of International Programs be filled by an immigrant faculty member who is globally trained and empathetic to the interests of immigrant and international students; and

Kim Ho, the attorney, is working with the students in an organizational capacity. She said Columbia’s decision to disband the office was done without any input from students or faculty. She said work from that department will be distributed to other “non-immigrant” administrators in other departments.

“There’s a very racially insensitive and paternalistic culture at that seminary,” she said.

Correction: An earlier version of this story misstated the percentage of Korean students at Columbia Theological Seminary. This story has been updated with the correct information.