Flicks With Nicki – Us

Flicks With Nicki – Us 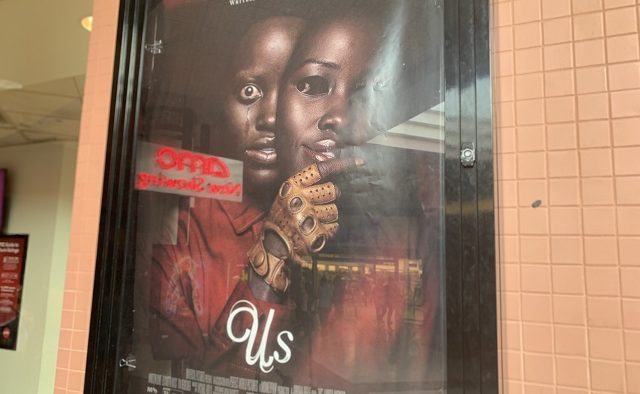 “The Enemy Within” is one of my favorite episodes of Star Trek: The Original Series. Because of a transporter malfunction, two versions of Captain Kirk appear. One good. One evil. The good one becomes ineffectual and weak. The bad one acts hostile and cruel. The bad one also wears excessive amounts of eyeliner and eventually a scar. The evil twin is easy to spot, or so we think.

Jordan Peele amps up the evil twin theme in the horror movie “Us.”

The film starts on the boardwalk in 1986 Santa Cruz, Calif. The location immediately brings to mind teen horror movie, “Lost Boys.” Though filmed in Santa Cruz, “Lost Boys” called it Santa Carla, a city overrun with vampires. Peele knew what he was doing when he picked this location. Throughout the film, he pays homage to horror themes and movies we know and love.

Beach towns are filled with sweet nostalgia and hints of dilapidated despair. We worry when a girl (Madison Curry) wanders away from her bickering parents, specifically her inattentive father. She leaves the crowd of people and enters a fun house wearing her Michael Jackson Thriller t-shirt while carrying a blood-red candy apple.

At this point, we’re pretty scared. First rule of horror movies, always stay with the group. Something strange happens that impacts this girl for the rest of her life.

We zoom to present day, where The Wilsons are heading to a vacation house that used to be Adelaide’s childhood home. Adelaide (Lupita Nyong’o) and Gabe (Winston Duke) have two children. Zora (Shahadi Wright Joseph) plays the typical teen with her head stuck in her phone, and Jason (Evan Alex) is a little off. Peele never says how, but the implication is that he has “The Shining.”

They go to the beach to meet with frenemies, the Tyler family. In a film that isn’t about race, Kitty (Elisabeth Moss) and Josh (Tim Heidecker) embody the cliché of white superficiality and indifference. Their twin girls, Becca and Lindsey, make us nervous from the start. They are mean. And they are twins.

As his mother did earlier in the film, Jason wanders off and sees a strange man near the boardwalk. Friends, please remind your kids if they see a bleeding harbinger of death to let you know right away. But Jason doesn’t mention what he saw. Adelaide knows something is up. She freaks and wants to leave town, but it’s too late. Their doppelgangers appear that night. Every member of the Wilson family has an evil twin. Buckle your seat belts, and we are off!

Gabe confronts the family of strangers. First, in a normal assertive “white voice” and then, he code-switches to his “Black man” voice. Code-switching is the way we speak depending on the situation. As a Black person in America, it helps to be able to switch between these two voices in order to assimilate into mainstream culture.

Ironically, the doppelgangers don’t speak at all. Their language is muted and at best guttural animal sounds, clicks, and sign language. They wear prison-like jumpsuits. Red, Adelaide’s twin, carries handcuffs that resemble slave shackles. She talks and speaks in a stilted voice that is at the same time robotic and strangled. Red tells Adelaide that she has come from the tunnels beneath the city, and they are tethered to each other.

Gabe is matched against Abraham. We think Biblical patriarch from Ur, and the one who was called to kill his son Isaac. Zora’s twin is Umbrae, meaning the darkest part of the shadow that might occur during an eclipse. Jason is paired with Pluto, both a Disney dog and the mythological ruler of the underworld. Red is just Red. The blood of angry men.

Each family member is set up to be hunted and murdered by their bad twin.

Jason and Pluto best illustrate the power of a twin. Jason wears a hard-plastic mask. Brown ape with snarling teeth. Pluto’s mask is white stitched fabric like one might use to protect a surgical procedure. At times, I thought of Frankenstein’s attempt to reassemble a body. In another scene, I imagine the stitching on a rag doll.

You only need to have passed 10th grade literature to recognize the blatant symbolism of Paul Laurence Dunbar’s poem, “We Wear the Mask.”

The movie is filled with jump scares, murder, and mayhem. The true terror is how can Adelaide help her family survive. There are moments when she takes control, and moments when she relinquishes it.

Who will be capable of saving themselves? What will we do to survive? Kill? Lie? Steal? That’s not horror. That’s the reality of our world.

Depending on how much horror and sci-fi you’ve been exposed to, the ending may or may not surprise you. I don’t think the point of the movie was to scare or surprise. The point was to ask questions.

Which twin are you? When you rise up, who do you keep down?

This is no Freddy Krueger movie. This wasn’t Michael Myers getting mad at teenagers having sex in the woods. Jordan Peele brings forth big themes like The Underground Railroad, enslaved people, prisons, rehab, addictions, and asylums. I was scared trying to process it all.

“Us” had a wonderfully sinister trailer, but the movie didn’t quite deliver. The acting was great. Lupita Nyong’o was near perfect in her dual roles. Every actor in the movie had to do double duty, and they did their jobs well.

The final aerial shot didn’t work for me. It took away my fear, and I need that fear to fully love a horror movie. Jordan Peele almost got the movie right. Almost. Go for the twist ending. There may have been one or two people in the theater who shouted “What just happened?” when the credits started to roll.

I consulted with my evil twin, and we agree that you should see it and discuss it with your book club. Grade B.

Love creepy twin stories? Try Alfred Hitchcock’s movie “Vertigo.” Read Stephen King’s “The Dark Half.” For good measure throw in the novel “The Prince and The Pauper” by Mark Twain. Did you see Us? Loved it? Hated it? Have complicated thoughts about it? Too scared to see it? Let us know in the comments