A Republican from Gwinnett County wrote a letter to the DeKalb County state legislative delegation apologizing for sponsoring a bill to create a new DeKalb County city of Vista Grove.

Decaturish received a copy of the letter from state Rep. Timothy Barr. Rep. Karla Drenner, DeKalb’s delegation chair, confirmed its authenticity. Today, March 7, is Crossover Day, the last day for a bill to cross over from one chamber to the other.

“I apologize for getting involved in a process that needs to be a discussion for DeKalb County alone,” Barr wrote.”I will not be asking for a committee hearing.I was swayed by the 50 or so people who came to see me last week, asking only that I drop the bill to allow them to continue working on it. I intend to remove my name from the bill at the appropriate time, and I have gained valuable perspective to consider as I continue with my work here in the future.”

A message left with a Vista Grove representative seeking comment on the letter was not immediately returned.

Barr’s decision to withdraw support likely marks the end of the road for Vista Grove in this year’s legislative session. Vista Grove would be located in central DeKalb and includes much of the territory that was in the proposed city of LaVista Hills, which was defeated in 2015. Vista Grove would have a population of around 60,000 people. A feasibility study for the proposed city shows the city would bring in $10 million more in revenue than it would spend on providing services.

In an earlier interview, a spokesperson for Vista Grove said the group wanted a Republican as well as a Democratic sponsor to show bipartisan support.

The partisan history of cityhood can be traced back to the formation of Sandy Springs in Fulton County. New cities have been vehemently opposed by Democrats that control the delegations of some Atlanta counties. To get around this, when the Republicans took control of the Legislature they changed the rules so that city legislation could be general legislation. This is why Sandy Springs finally formed in 2005 after decades of trying to become a city.

The Democratic sweep of the delegation in the Nov. 6 election raised questions about how cityhood bills would fare under a new political dynamic. DeKalb County cityhood bills have lost their greatest champions, notably state Sen. Fran Millar, who lost his seat to Sally Harrell.

Here’s a copy of Barr’s letter: 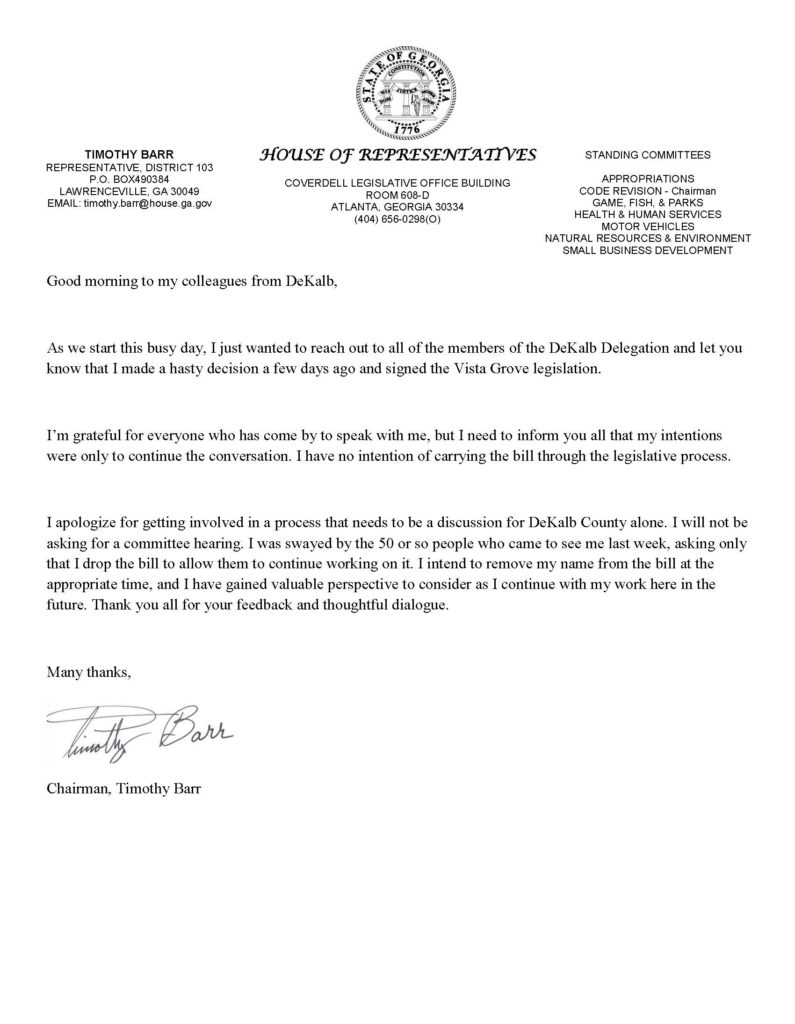