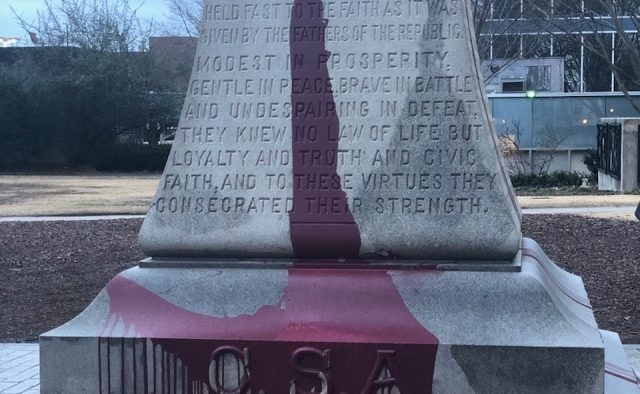 If a bill passed by the state Senate becomes law, people who damage monuments like the Confederate obelisk in the Decatur Square could face harsh penalties.

Critics say the bill is an attempt to prevent local communities from removing symbols of the Confederacy from public spaces.

Senate Bill 77 says that any person or entity that damages, removes or destroys a monument without replacing it will be responsible for paying triple the full cost of repair or replacement. Anyone damaging such monuments could also be ordered to pay attorney’s fees and court costs.

According to the Atlanta Journal Constitution, under current state law a local judge rules on the cost and fines for damaging a monument.

Georgia law prohibits removing these monuments, but an attorney for DeKalb County believes the law allows for the monument to be moved as long as it isn’t obscured. But the county has been unable to find a suitable location for it and instead wants to erect a plaque near the monument noting its racist origins.

The Decatur City Commission has also passed a resolution calling for its removal.

The monument is located by the old DeKalb County courthouse and was constructed in 1908. It is widely seen as a symbol of the Jim Crow era south, a not-so subtle message to black residents who would question the status quo. The future of the monument has been hotly debated since a violent white supremacist rally in Charlottesville, Va in 2017.

Two competing bills are also under consideration. House Bill 175 would remove the protected status of Confederate monuments and Senate Bill 51 would allow local governments to remove them. Those bills have not been passed by the House or the Senate.

In a statement following the Senate’s vote on Senate Bill 77, the groups said, “We are disappointed by yesterday’s passage of Senate Bill 77. This is a blatant attempt to protect Confederate monuments and prevent communities from deciding which causes are worthy of veneration in our public spaces.

“Our community in DeKalb County has made it known that we want to remove the symbol of racism and bigotry from Decatur Square, and our elected officials in Decatur and DeKalb listened and understood. This bill would attempt to further erode local control so communities like ours would continue to be saddled with these monuments to white supremacy. It is an insult to the dignity of the black taxpayers in Georgia to require their tax dollars be used to maintain the symbols of their own oppression. It is an insult to all the people of Georgia to promote lies about the Civil War and the traitorous actions of the slave-holding South.”