Under new city rules, King of Pops will no longer be allowed to vend on Decatur Square

Under new city rules, King of Pops will no longer be allowed to vend on Decatur Square 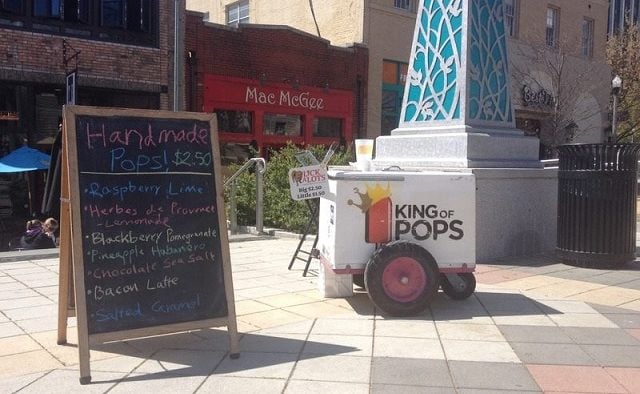 Editor’s note: This story, originally published in March, resulted in a lengthy investigation which you can read by clicking here.

King of Pops has been doing business out of a cart on the Decatur Square for years, but they will not be allowed to sell their cold treats on the Square this year.

The Decatur City Commission this week approved the reinstatement of a pilot program to allow vendor carts in public spaces, specifically the Decatur Square and in Harmony Park in Oakhurst. Both of these spaces are public property.

Under the program’s rules, King of Pops will no longer be allowed to operate a cart on the Square or in Harmony Park because it competes with a nearby brick and mortar business, Steel City Pops.

According to the city, Steel City pops will now operate Popsicle carts on the Square and in Harmony Park.

“The pilot program requires that a vendor cart not be in competition with a city of Decatur brick and mortar business,” Downtown Program Manager Shirley Baylis said.

Steel City Pops, headquartered in Birmingham, opened a store in Decatur in 2017.

Baylis said the new rule isn’t intended to banish King of Pops from Decatur and said it was not implemented at the request of Steel City Pops.

King of Pops has been a mainstay on the Square during sunny days for almost a decade. But co-founder Steven Carse said city officials in 2018 informed the company they were no longer allowed to operate there. Baylis said a city official last year informed King of Pops the previous pilot program was ending

Carse said he enjoyed working with the city.

“They were very good to us, and the situation changed,” Carse said.

While the rule applies to vending carts generally, King of Pops was apparently the only cart vendor operating in a public space in Decatur. Baylis said the city has only received inquiries about operating a vending cart from Steel City Pops, King of Pops and some jewelry vendors.

Assistant City Manager Lyn Menne said there is no ordinance outlining the city’s no-competition rules when it comes to cart vending.

The city did have a draft ordinance, but it was never approved, Menne said.

“We chose to bring back our small scale approach as the best solution and wanted to bring it back before the weather warms up and people are out and about,” Menne said. “We had requests from King of Pops and Steel City Pops, but as is our policy, when there is a local business option that will be our choice. We have not actively recruited vendors but have considered others in the past. The best example was a hot dog vendor to provide a fast serve option for folks out enjoying the Square, but DeKalb County Health regulations made that an impossible option for a long-term vending business because food must be prepackaged. Should we get other requests, we will consider them but the goal isn’t to bring in multiple vendors but rather provide a few limited vending offerings on the square.”

Baylis said the city doesn’t plan to advertise these opportunities to potential cart vendors. She said the city decided to reinstate the pilot program while the city works to create permit forms and processes for it.

Baylis said King of Pops products are available at other businesses in Decatur.

“King of Pops does have coolers with pops in several restaurants in the city,” Baylis said. She said King of Pops can apply to vend at festivals around the city.

Carse, with King of Pops, said his company enjoyed its time operating on the Decatur Square.

“We really love Decatur, and we are always trying to figure out as many ways as possible to be a part of the community, whether it is a fundraiser or yoga event at the high school, the amazing festivals downtown or in Oakhurst or something like the Boy Scouts Pinewood Derby,” he said. “The folks at the city office have always been extremely kind to us, but they have gone a different direction for vending on the square this year. We’re extremely grateful for the last nine years of support that we have gotten from Decatur and are eager to figure out more ways to further our purpose of creating Unexpected Moments of Happiness in the community.”

Here is a copy of the letter the Decatur City Commission received regarding the vendor cart pilot program. The program was approved at the March 18 City Commission meeting. . Following the original publication of this article, the city said it in fact had passed an ordinance regarding vendor carts in 2017. 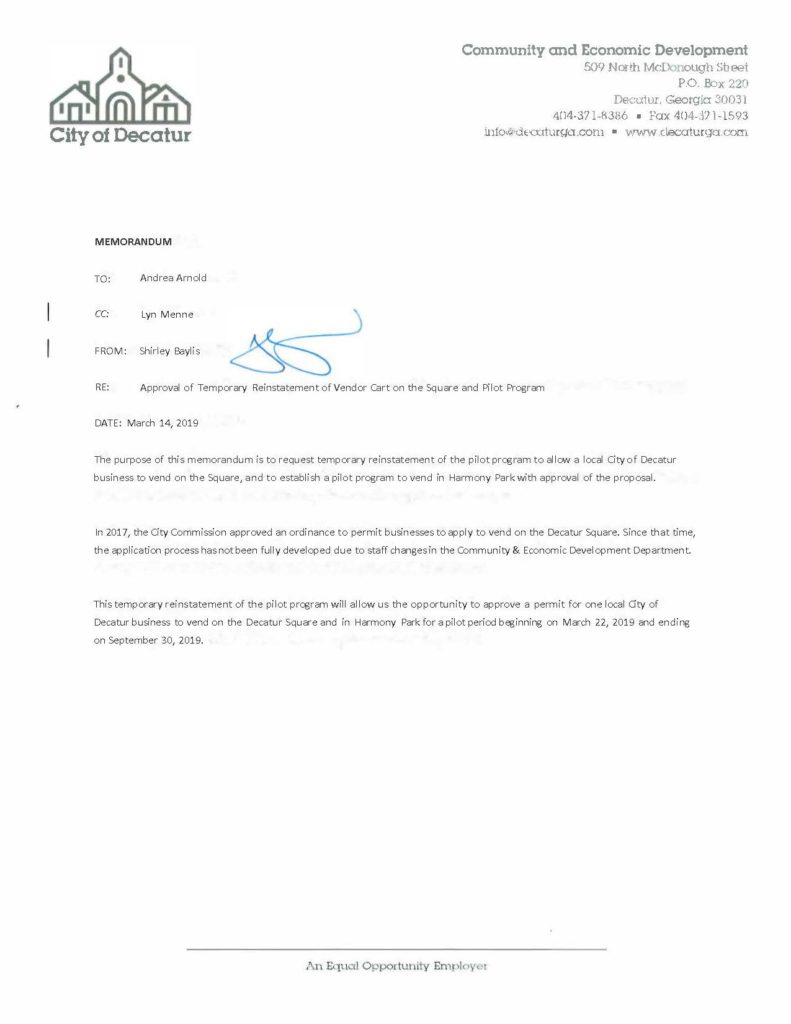