With millions of gallons of sewage spilled, DeKalb behind schedule on fixes

With millions of gallons of sewage spilled, DeKalb behind schedule on fixes 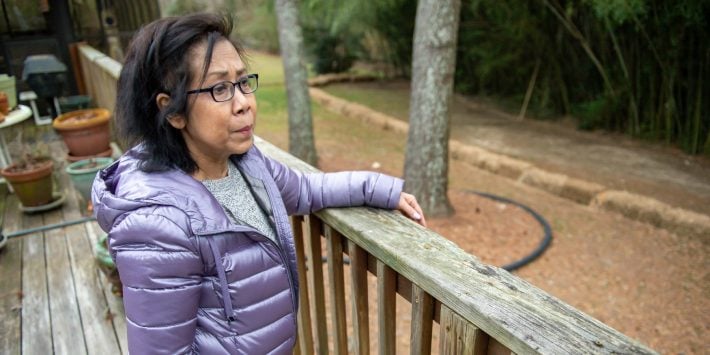 DeKalb County homeowner Ranee Bassett says there have been so many sewer spills in her yard, she can't sleep when it rains at night, out of worry that there will be an overflow. CREDIT BITA HONARVAR / WABE
Share

On Dec. 28, 90,000 gallons of sewage came up out of a manhole and poured into Ranee Bassett’s backyard. She lives near the end of a cul-de-sac in DeKalb County with a creek flowing behind her house and tall bamboo bending over the yard.

She said the spill began in the night. What was coming out of the manhole was black, smelly, and she could see toilet paper in it.

This was one of more than 20 spills that day, totaling more than a million gallons of sewage spilled in DeKalb. After days of rain, the county’s system was overwhelmed. The spills are a problem the county is working on – and ordered to fix by mid-2020 by a federal consent decree – but DeKalb has fallen years behind schedule. Officials say they’re trying to catch up, but that work is happening too slowly for some.

From Thailand originally, Bassett said when she bought her house more than 30 years ago, she didn’t realize there was a manhole in the back yard. But there is, and the past few years, she said, there have been several spills. While the county does come out and clean things up – after the December spill workers sprayed sanitizer and placed hay bales across the yard – she said she’s never heard anything about an actual solution.

“Nobody tells me what they’re going to do,” she said. 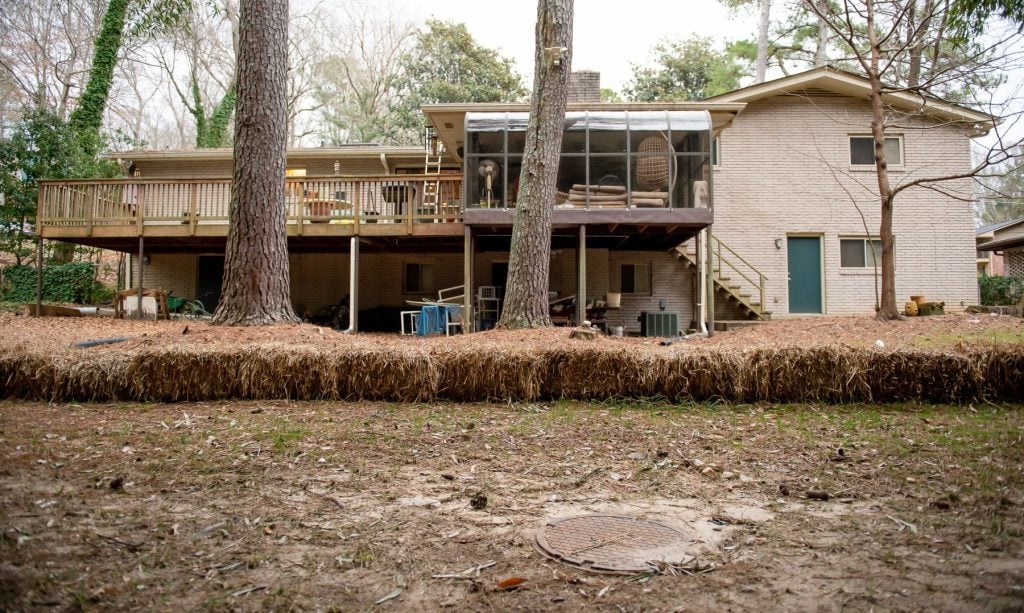 Ranee Bassett says this manhole in her backyard has overflowed several times in the past few years. While the county has applied sanitizer and set out hay bales, Bassett says no one has told her when the sewer problems will be fixed. (Bita Honarvar/WABE)

A month after the spill, there was still toilet paper in her yard. She said when it rains she can’t sleep at night because she’s worried about another spill. And this is going on while she’s in treatment for cancer, undergoing chemotherapy.

“I cannot keep, sleepless,” she said.

DeKalb County has had problems with its sewers for decades. Some say there are capacity issues – that the old system just can’t handle the number of people and businesses that use it, though the county says that’s an issue in only a small area. What’s indisputable are the dry-weather spills, caused by blockages by, say, grease; and the wet-weather spills, caused by rain getting through cracks in old, unmaintained pipes and flooding them. Between 2006 and 2010, the county averaged more than 160 spills a year.

“It came to a head in 2010,” said Jackie Echols, president of the South River Watershed Alliance.

But Echols is disappointed in progress since then.

“Honestly? I don’t see a lot of difference in where we were 10 years ago and where we are now,” she said. 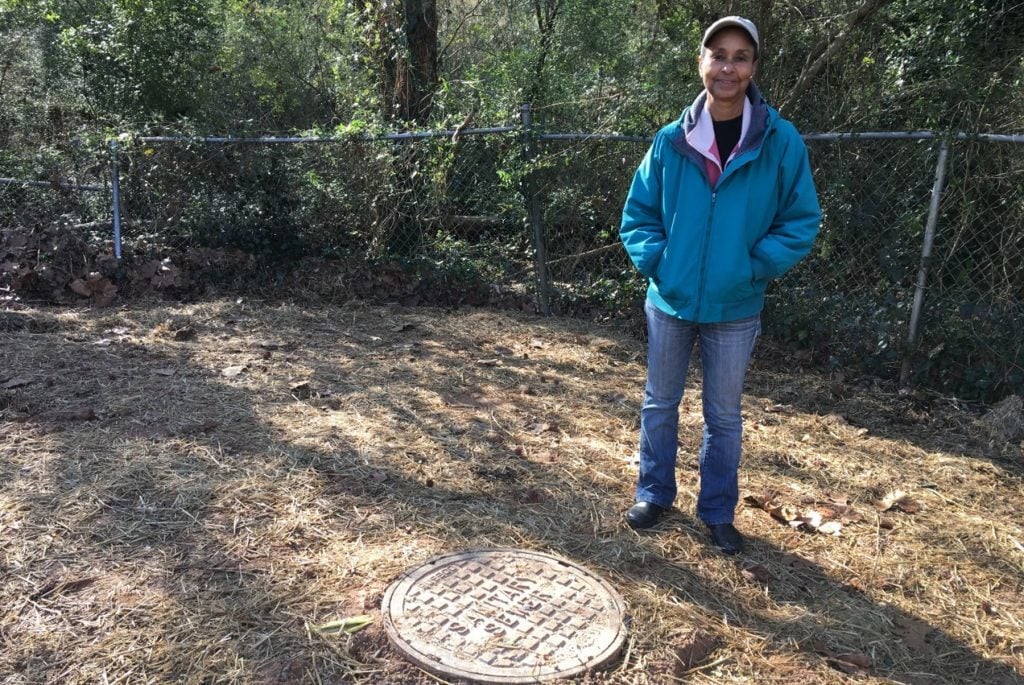 Jackie Echols, president of the South River Watershed Alliance, stands next to a manhole in another DeKalb County backyard. There have been a number of large spills at this location, and last year the county bought the house, in order to do work on the sewer problems there. (Molly Samuel/WABE)

‘A Series Of Unfortunate Events’

“There have been a series of unfortunate events in DeKalb,” she said.

After the consent decree went into place, corruption scandals in DeKalb led to a commissioner resigning and serving time in jail and the then-CEO serving time, as well. DeKalb has had seven watershed directors in the past 10 years, and it delayed putting a single person in charge of the consent decree for years.

“How can you successfully navigate a long-term court order with all these long-term solutions you’ve got to put in place when you have no consistency in leadership over time?” Jester said.

Activist Jackie Echols thinks the regulators – the EPA and EPD – aren’t doing enough to hold the county’s feet to the fire. Both agencies declined to do interviews for this story.

Overall, the county lost about three years of work due to mismanagement and political infighting, said DeKalb CEO Michael Thurmond, who came into office in 2017.

“We did not make the progress that we needed to,” he said.

In 2016, the then-watershed director discovered the county had been underreporting its spills to regulators. DeKalb came clean and paid a fine.

In 2017, the county missed a deadline set in the consent decree to put together a dynamic hydraulic model, a computer model that shows how the sewer system should be working that would help the county identify where problems are coming from. That model is still not finished.

Getting Back On Track

The county is doing work. There’s more than $100 million in repairs and upgrades either happening now or planned. The county has installed flow monitors in some pipes, which help find the causes of spills. And the number of major spills per year is lower in the past few years than in the years leading up to the consent decree.

“I’m convinced without any doubt whatsoever we’ve gotten our consent decree activities back on track,” Thurmond said. “We’re doing more work right now than has been done and attempted throughout the life of the consent decree.”

At Milam Park in Clarkston, for instance, workers are repairing and replacing a mile of sewer pipes. This is a place where last year sewage overflowed into a lake, killing hundreds of fish. The spill was caused by diapers blocking a pipe, said Reginald Wells, director of DeKalb’s Department of Watershed Management. 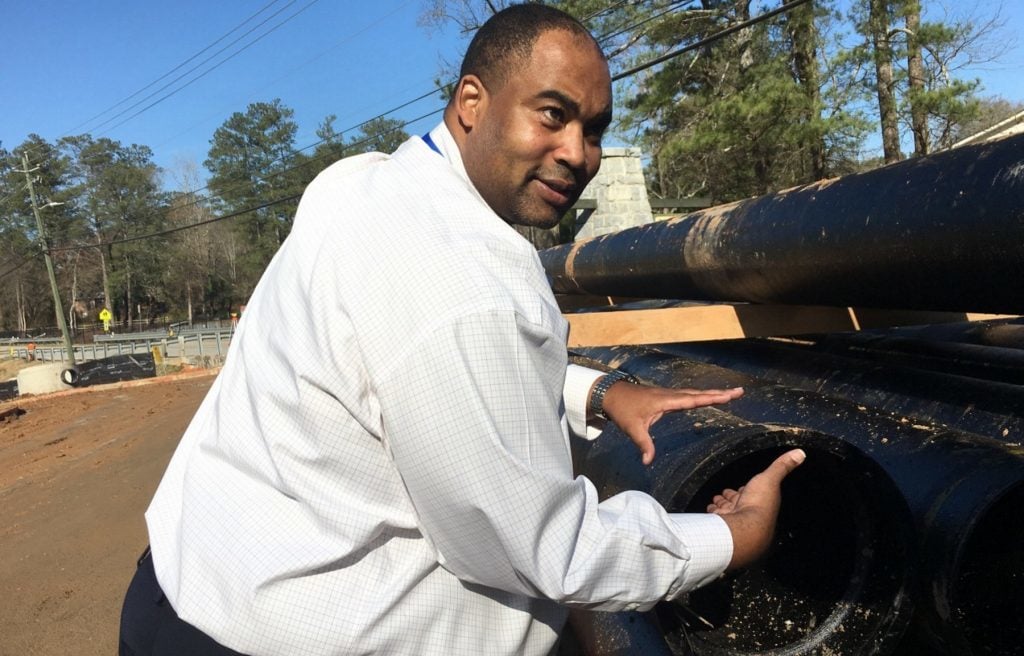 “Every sewer system — new, old, in-between — are susceptible to blockages. Things happen; people flush basketballs, rubber duckies,” Wells said. “We’ll never be at a point where we’re 100 percent free of blockages. The key is we just have to do what we can to minimize them.”

Wells says the county has identified the priority areas that need to be fixed – that’s a process required by the consent decree – and with work on those places getting going, plus more regular maintenance, he aims to have the sewer system in good shape for the next 50 years.

Thurmond said the sewers are a priority for him. Seeing a 6 million gallon spill drove that home.

“It’s what you smell before what you see,” he said. “It helped me understand that I need to be personally invested, that this is not something that can be addressed from a distance.”

Some Fixes Still Far Off

County Commissioner Nancy Jester said the work is happening too slowly, the county hasn’t done enough to communicate with the public, and she doesn’t believe DeKalb will be able to comply with the consent decree’s deadline to have the sewers fixed by June of next year. In a public works and infrastructure committee meeting last week, a county official said work on the priority areas would continue into 2023.

Scott Towler, the former director of Watershed Management who discovered that the county was underreporting spills in 2016, is now suing DeKalb, alleging corruption and claiming that the sewer system has capacity issues that the county is ignoring. Another former employee, who worked in DeKalb’s procurement department, has also filed a whistleblower lawsuit, claiming she was fired after she disclosed that there was collusion and bid-rigging, among other issues in the watershed department.

The county said it can’t comment on the pending litigation.

DeKalb CEO Thurmond says the consent decree deadline is not his biggest concern.

“The deadline is important, and obviously it will have to be addressed, but I’m not sitting here looking at the calendar,” he said. “I’m sitting here, alright, where are we today, what work is getting done, what progress is being made.”

But it could end up being too late for Ranee Bassett. She says she’s tired and wants to be able to focus on her health as she undergoes treatment for cancer, instead of worrying about sewage in her backyard. 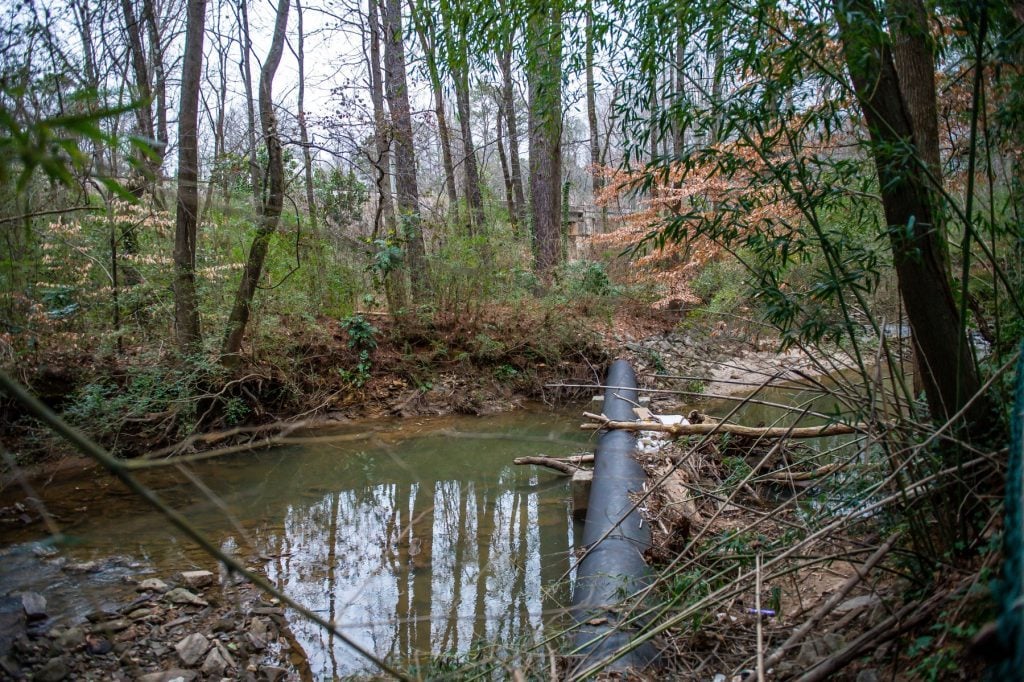 The sewer that goes under Bassett’s backyard crosses a creek just behind her house. Trash and debris accumulate on the pipe. (Bita Honarvar/WABE)

“I just want to know when it’s going to be fixed, so I don’t have to worry anymore,” she said.

But her fix could be a ways off.

DeKalb says the dynamic hydraulic model that was supposed to be done in 2017 is needed to figure out what’s going on in her backyard. The county says that model should be complete by the end of this year.