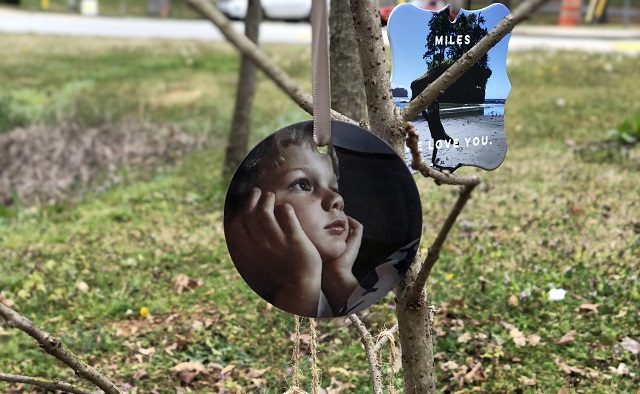 Classmates of Miles Jenness panted a tree in his honor. He would've turned 6 on March 1. Photo provided to Decaturish
Share

A woman accused of causing a fatal collision that took the life of a 5-year-old Kindergarten student has been indicted, but the Grand Jury did not indict her on a charge of driving under the influence.

She was indicted on charges of vehicular homicide, reckless driving, and battery.

The child who died as a result of the crash, Winnona Park Kindergarten student Miles Jenness, had a birthday on March 1. He would’ve been six years old.

Attorney Corinne Mull, says her client, Michelle Wierson, is mentally ill and was “in the throes of a psychotic break” on Sept. 27 when she allegedly slammed into two vehicles with her Volkswagen on Midway Road at South Candler Street in Decatur. The crash fatally injured Jenness. Wierson was initially accused of driving under the influence. The affidavit in support of the arrest warrant alleges that Wierson was taking a combination of Ativan, Clonazepam (also known as Klonopin) and Seroquel.

But Mull says a toxicology report shows she had no controlled substances or alcohol in her system. Decaturish left a message with the District Attorney’s Office seeking comment.

“That’s the danger of police work.They go with what they think,” Mull said. “That’s why we have to do these toxicology tests to be sure.”

Mull said she plans to defend her client on the remaining charges.

“This is just like a situation where somebody had a heart attack behind the wheel,” Mull said. “The car swerves, hits somebody, kills somebody. That’s unfortunate. It’s an accident, not a crime.”

According to police, after the collision Wierson began behaving erratically. She is accused of exiting her vehicle and running in and out of traffic. An off-duty DeKalb County Police Officer and an on-duty MARTA police officer happened to be in the area and stopped to help. The police report says the DeKalb County Police officer attempted to get control of her and “she began assaulting him and was grabbing and scratching at his arms.”

She was taken into custody and transported to an area hospital for evaluation and was later transported and booked into the DeKalb County Jail for the battery charge.

Avondale Estates Police Chief Lynn Thomas told Decaturish that officers received a call from 911 dispatch on the day of the incident.

“The comments on the call was the woman’s daughter was having some type of episode, and she had left the residence,” Thomas said. “That’s all we had, no direction of travel.”

Two officers went to speak to her parents, but she had been gone for a while before police arrived. Thomas said the parents told her that Wierson left the home to go to her daughter’s school because she believed her daughter was in danger.

Thomas said Avondale Police called Atlanta Police to send an officer to the school to check on her daughter. Wierson crashed on the way to her daughter’s school, Thomas said.

Mull said Wierson was “psychotic” when the collision occurred.

“She was singing in the streets, kept saying she had to get to her daughter’s school,” Mull said. “She was trying to get there to save her daughter.”

“And the pain is tremendous,” Mull said. “She feels, as far as she’s concerned, nothing worse could’ve happened. A child died, and she is pretty much in the throes of depression because of that. She’s a mother herself. She’s a mother to an adopted child, and she knows what it is to want to have a child. And to lose a child … this is the worst thing that can happen to a parent.”

Miles’ Jenness’ mother, Leah, said her son’s classmates on March 2 planted a tree in his memory at the crash site. The parents of his classmates also held service projects throughout the weekend, visiting a cat shelter, making care packages for the homeless shelter and visiting with senior citizens. They called the event “Smiles for Miles.”

Leah Jenness referred questions about the case to the District Attorney.

“We just miss Miles every second of every day, with completely broken hearts,” Leah Jenness said. “He should have celebrated his 6th birthday this weekend.”

Editor’s note: Some readers objected to the use of the word “accident” in a previous version of this story. Decaturish consulted the most recent revisions in the Associated Press style book, which recommends that news stories avoid the term “accident” in stories like this and instead opt for words like “crash” and “collision.” This story has been updated to reflect that recommendation.