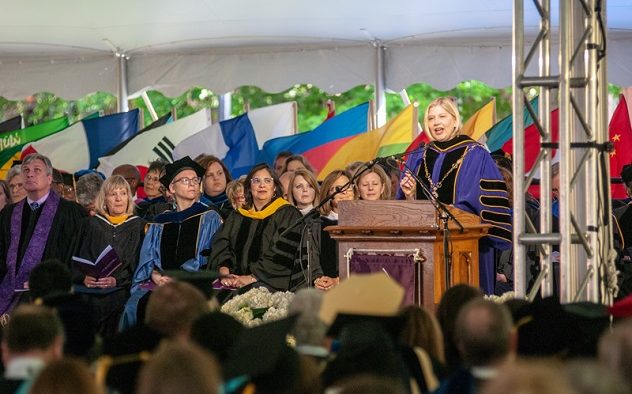 In a ceremony that interwove lively student performances with regulation academic pomp and circumstance, Agnes Scott College on Friday inaugurated its ninth president, Leocadia I. Zak.

In her inaugural address, Zak outlined a vision for the 130-year-old women’s college that seeks to, in her words, “respect our past, make the most of our present, and invest in our future.”

A graduate of Mount Holyoke College and Northeastern University, Zak served as the Director of the U.S. Trade and Development Agency from 2009 to 2018. While she has taught at Boston University School of Law, Morin Center for Banking and Financial Law, and Georgetown University Law Center, Zak’s background is not as tenured faculty or in college administration.

Paul Wilson, a former law colleague who is now an Associate Justice for the Massachusetts Superior Courts, spoke of her lifelong willingness to mentor others, saying, “I congratulate Agnes Scott College for taking the risk and having the boldness to hire as its president somebody who is not a career academic, but who is nonetheless a career educator.”

President Emerita Elizabeth Kiss said, “With all admiration, affection and respect for the four great men who led Agnes Scott for its first eight decades, [President Zak’s] presidency marks a milestone. This great women’s college has now had more female than male presidents.”

Mayor Patti Garrett spoke of the lengthy relationship between Agnes Scott and the city of Decatur and offered an official proclamation of April 26, 2019 as “Leocadia ‘Lee’ I. Zak Day.”

Although her official inauguration was April 26 of this year, Zak has been carrying out the duties of President of Agnes Scott College since June 11, 2018, long enough for students to form their own opinions.

“Kiss always wanted to be your best friend. She was good about that,” said Perry. But, Perry added, “[Zak] does make sure to show up for campus events.”

But Amira Dougherty, a senior and president of Agnes Scott’s Student Government Association, sees Zak’s administrative decisions as reflective of her student-centered focus.

According to Dougherty, Founder’s Day has traditionally been a more formal event that looked to the past, but “this year, [Zak] moved the location into an area where students normally come. She got more student performers and speakers, which I think students appreciated and it brought turnout up.”

Summit was initiated by Elizabeth Kiss as a way to revamp the liberal arts program in order to attract new students without losing Agnes Scott’s traditional mission to educate women.

Rather than stand-alone study abroad programs, first-year students prepare by spending a year studying the history, language, and culture of their future destination. When they return, they share what they have learned with the Agnes Scott community.

As students progress, they choose a major and whether to focus on leadership or global learning. By graduation, students create a digital portfolio to use in graduate school or job searches.

Dougherty said, “I work in our Center for Digital and Visual Literacy, where we help people curate those portfolios. It’s supposed to be a digital tour of your four years. Mine has helped me get jobs.”

Speaking of Zak’s tenure so far, Dougherty said, “Being part of this change wasn’t something I came into Agnes Scott expecting to happen, but it’s been really remarkable to see how Agnes Scott has been able to maintain the same culture while shifting into a new idea of leadership under President Zak.”