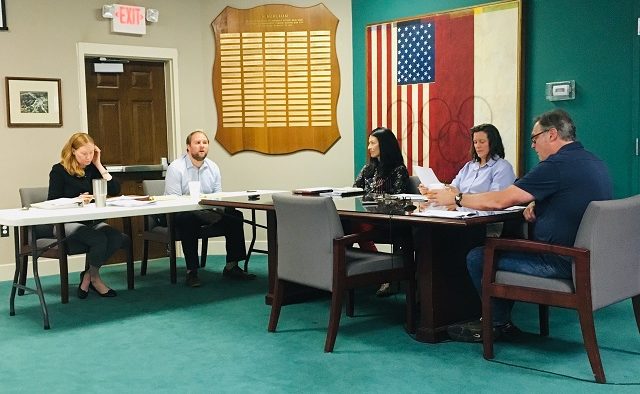 At their work session meeting on April 17, the Avondale Estates Board of Mayor and Commissioners considered a range of city business, including proposed funding for ongoing projects, a business permit, a new Downtown Development Authority member, and the upcoming zoning ordinance rewrite.

Douglas Gebhardt of Davenport and Company offered the recommendation that the city take out a bond anticipation note – basically a line of credit – in preparation for funding projects that are part of the Stormwater Master Plan, the Kensington and North Woods stormwater projects, and park design and construction.

“This mechanism allows us the greatest flexibility to not only immediately address capital projects as they exist, but to do so in a manner that limits our immediate financial liability out of the general fund, and do so without any additional burden on the taxpayers,” said City Manager Patrick Bryant.  At the direction of the Board of Mayor and Commissioners, city staff will develop agreements for the bond anticipation note which they will bring back to the board for approval.

Commissioner Lisa Shortell sought clarification from Bryant and Gebhardt that the bond anticipation note would have a positive effect on the city’s credit rating.  “I think that’s important for everyone to understand, that this may improve our standing,” said Shortell.

Dustin Swinks applied for a conditional use permit for a private tattoo studio at 820 N. Clarendon Ave. Owners of nearby businesses attended in support of the application.  The studio will be open by appointment only and close at 8 p.m.

The Downtown Development Authority received five applicants to fill a current opening for a new member. After reviewing candidates, the DDA recommended Stacia Familo-Hopek, the owner of the Lost Druid Brewery which will be opening soon on Washington Street.

In response to requests by residents, the city of Avondale Estates is considering the use of washable materials for the traditional July 4 street painting instead of spray paint. Resident Dee Merriam suggested that there be an effort to educate participants about flag protocol.

“I’ve been appalled to see our American flag painted on the street for us to trample on, and I feel very strongly about that,” said Merriam.

Matters discussed during the work session will be voted on at the Board of Mayor and Commissioners regular meeting scheduled for Monday, April 22 at 6:30 p.m. The meeting will be held at City Hall, located at 21 North Avondale Plaza, and is open to the public.