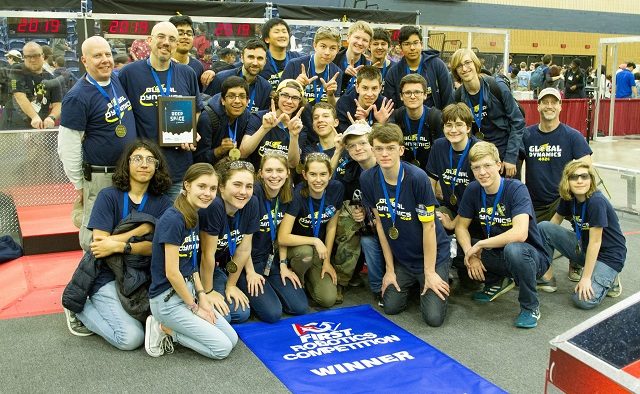 The Decatur High School robotics team has qualified for the FIRST Robotics Competition’s World Championship, according to a press release from Decatur Robotics.

Founded in 2012, Decatur’s robotics team, Global Dynamics, has won the State Championship and advanced to the World Championship level three times, in 2013, 2016 and 2019. The team has competed in the FIRST Robotics Competition.

Now in its 28th year, FIRST Robotics – made up of 3790 teams, including 95,000 students from 33 countries around the world, the release said – have six weeks to build robots weighing up to 140 pounds.

The teams and their robots compete to form strategic alliances and achieve objectives on the field of play.

“The FIRST Robotics Competition is the equivalent of varsity robotics,” the release said.

Decatur’s team has received numerous awards for creativity, engineering and innovation in their robot designs. Last year, the team won the Industrial Design Award, two Entrepreneurship Awards and the Innovation in Control Award.

“Competing in FIRST Robotics has provided the opportunity for Decatur students to gain practical hands-on engineering experience,” the release said. “The opportunities provided by Decatur Robotics have inspired many past and present team members to pursue higher education pathways to become the next generation of engineers.”

In the past month, 28 Decatur high school students finished 1st in the Dalton Regional Qualifier and brought home the Engineering Inspiration award in Columbus. Earlier this month, the team competed at the Peachtree District State Championship and qualified for the FIRST Robotics World Championship, which takes place in Texas from April 17 until April 20.

For some students, robotics brings a strong sense of pride.

“The joy of watching a robot you created from idea to design to a finished product is unmatched by any other,” alumnus Jake Brandwine said.

The team is also raising funds for its trip via a Go Fund Me account.