City Schools of Decatur stirred up a controversy last week when the school system asked parents to take a survey about whether they would agree to extra days off from school or early dismissals to give teachers more time to prepare for their time in the classroom.

At the time, the survey was presented as a response to requests from teachers.

An email to parents about the survey says, in part, “staff often request to have additional PL opportunities throughout the year.”

Some of the changes that CSD asked families in the community to consider included implementing a monthly day with no students, a half-day every other week, weekly two-hour early or late dismissal and adding nine days to the teachers’ contracts.

Many parents felt blindsided by the survey, which was not preceded by the public discussion that surrounds other contentious issues in CSD, like school redistricting. After Decaturish first published the story, an anonymous comment submitted on behalf of CSD teachers disputed the school system’s reasoning for the survey. The person who posted the comment declined to be identified out of fear of reprisals from the district.

The comment left on the story says teachers did not request additional professional learning days. The comment says the impetus for the survey came from a request for teachers to participate in training that fell outside the scope of their contracts with the district.

“Several weeks ago, staff were notified that the district had a goal that by November 2019, all teachers would participate in a two-day Beyond Diversity training,” the comment says. “Teachers were told that the training was required, although the training would be during off-contract days. A survey went out to staff requiring teachers to choose the dates of their training without space for comment. Many teachers were reticent and offended by this demand. This is in no way a judgment against the quality and intentions behind the training. As you likely know, teachers already volunteer significant amounts of personal time toward work-related responsibilities. However, many teachers feel that it is important to stand their ground and advocate for their personal lives and professional needs as central office places more demands upon teachers without their input. The central office was notified by staff and professional teacher organizations that there were no legal grounds to require teachers to attend training on non-work days. Therefore, several teachers declined to complete the survey communicating the days they would participate in the Beyond Diversity training. To meet the district goal of all staff participating in the Beyond Diversity training by November 2019, the district is now searching for days and/or times during the school calendar year.”

Following up on a tip, Decaturish requested a copy of a letter the Georgia Association of Educators sent to Superintendent David Dude about the training.

The letter, sent on March 26 by Karen Jones with GAE, threatened the school system with legal action over the training.

“The term of a standard teacher employment contract is usually 190 workdays per school year,” the letter says. “Duties assigned for weekend, holidays, or during the summer months are not within the scope of the contract and, therefore, employees are not contractually obligated to perform work during those periods.”

The letter concludes by saying, “I hope this matter can be resolved without the necessity of further action.”

“That can take many forms,” he said. “It doesn’t have to mean, boom, going into a court of law, but it certainly is a breach of employment contract. That’s what that means … We don’t play around. If we make a threat, we want to be able to back it up,”

In a March 28 email, Dude told Jones, “I agree with your assessment.”

He added, “Also, we have a pretty robust process for employees to air concerns like this, and to my knowledge no one did. So, if whomever contacted you attempted to raise this concern through the proper channels and it wasn’t addressed, I welcome them letting me know so that I can address it with whomever dropped the ball.”

In a follow up interview with Decaturish, Dude said, “It turns out we did communicate inaccurately, so we sent out corrected information.”

Here is the email exchange between Dude and Jones: 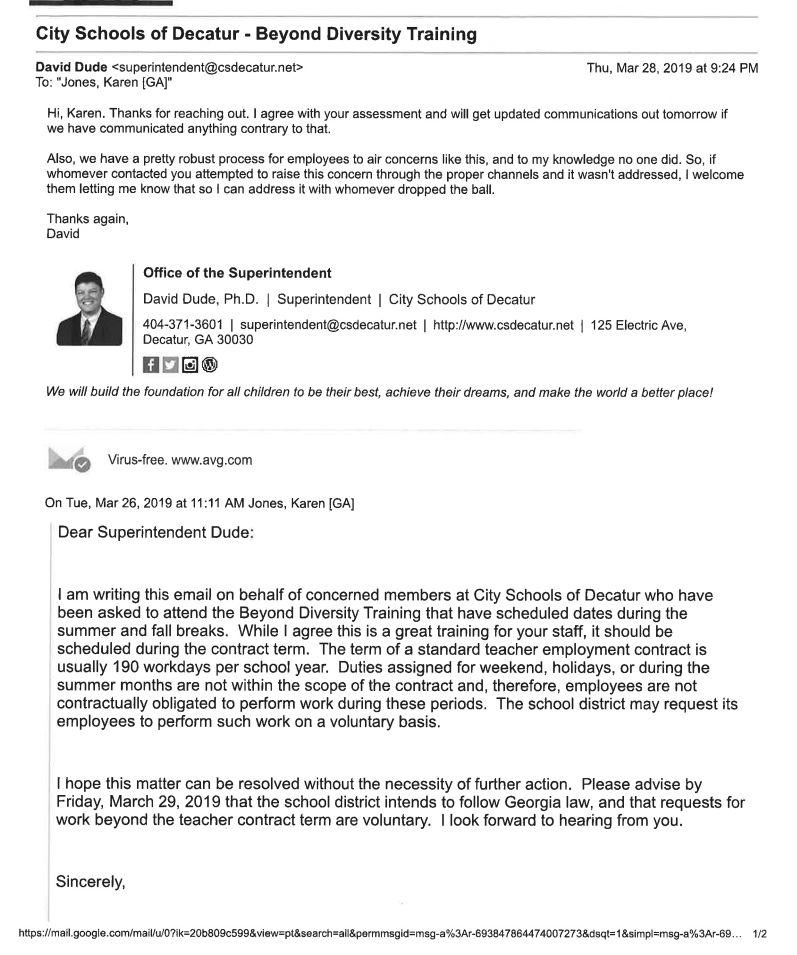 Dude sent out the following correction to teachers regarding the training, a day after his response to Jones: 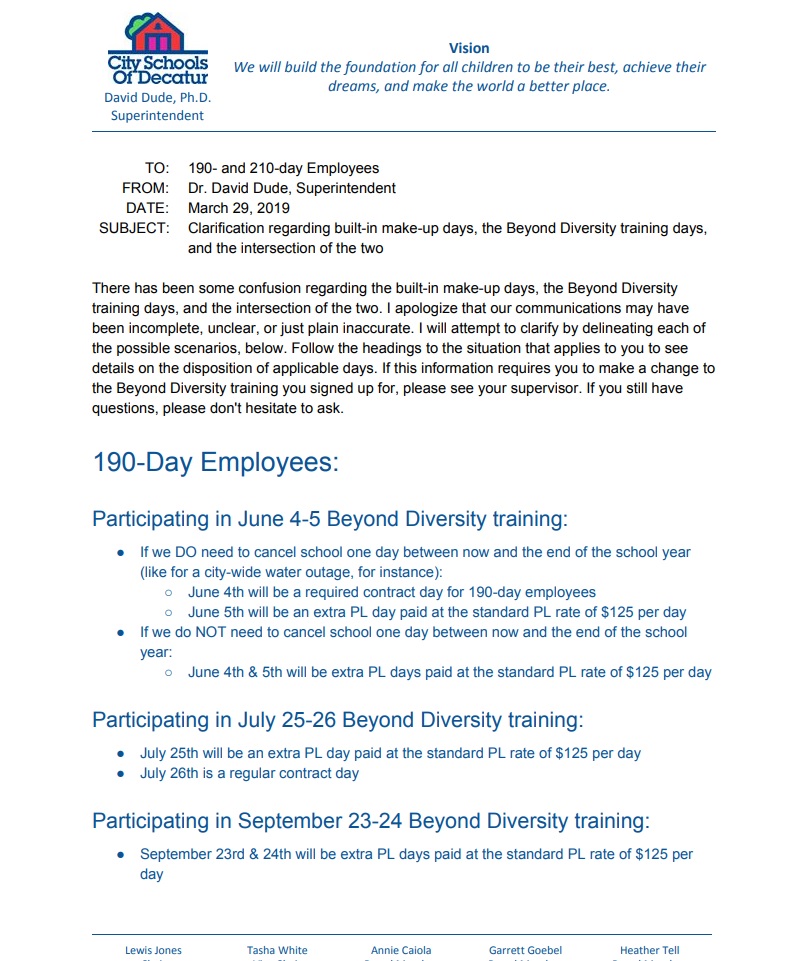 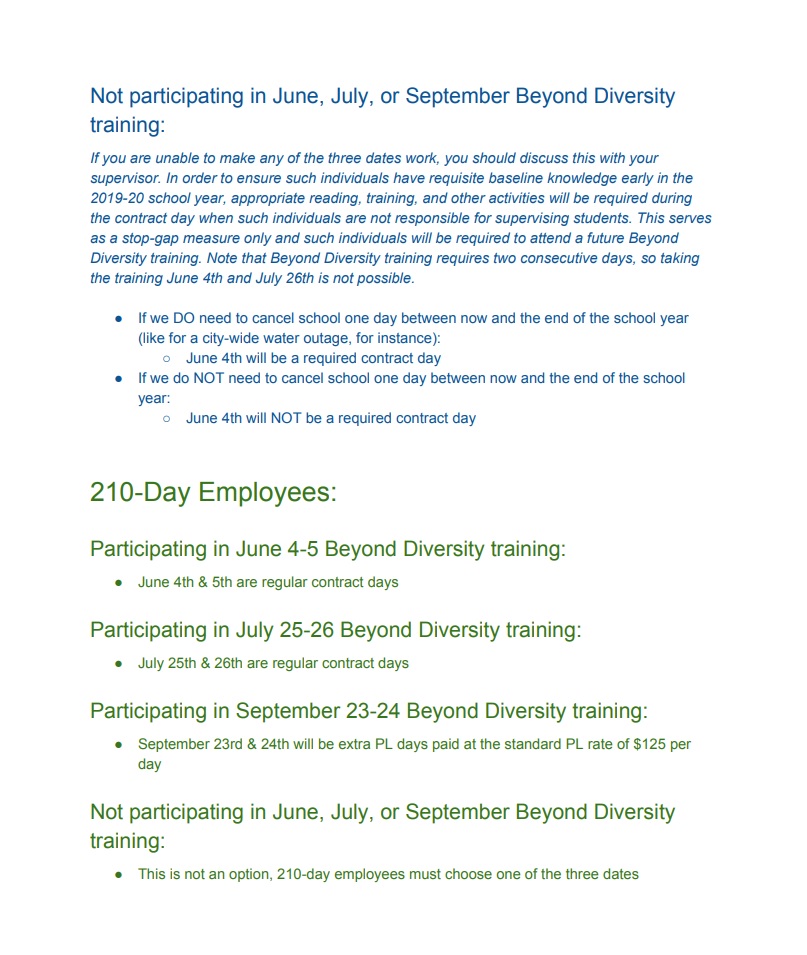 The parent survey went out on April 9. Dude said the exchange with GAE about the Beyond Diversity training isn’t what prompted the survey.

“We’ve been talking about the need for additional time for teachers for quite a while,” Dude said. “The two things are not related. [Jones’] concern was related to our requirement that teachers attend Beyond Diversity training in June, July, or September.”

The survey quickly became a PR headache for school officials, who decided that there needed to be more discussion about the survey, which was shut down. Dude said he does not intend to bring a recommendation to the School Board in May as he originally planned.

Following the controversy, he made a tongue-in-cheek post on his personal blog encouraging parents to “take a deep breath” and concluding with, “So, if this has been a stressful moment for you, please know that we do listen carefully to your feedback and adjust course as needed. Everything will be okay. Namaste.”

That post prompted yet another email to the CSD community sent on April 12. Dude apologized for how the survey was communicated and also apologized for the tone of his blog post.

Here is the full email:

I want to apologize for our poor roll-out of the Time for Teachers survey this week. We made many mistakes, including not laying a foundation for the need for additional time to begin with, not providing an opportunity to easily provide feedback for those who didn’t like any of the options, and not recognizing how divided the opinions would be between large stakeholder groups, to name a few. Additionally, I addressed the initial response with humor that was not appreciated by all. I am responsible for all of these missteps and I humbly apologize for any difficulties I caused for you. I am very passionate about serving our students and one way to do that is taking care of our staff. The very real need we have to provide for our staff eclipsed my vision of how passionately people would respond to this survey. We handled this need much too casually. We should have handled it more like the extensive engagement process we used when setting attendance boundaries in preparation for the opening of Talley Elementary.

In light of all of this, we are going to pause this discussion. No recommendation will be brought to the Board in May to make any changes to our schedule for next year or the year after. Instead, we will develop and implement a larger stakeholder engagement process to help all interested parties better understand the situation we are in and to have further two-way communication about that and potential solutions (those already presented and others that may arise during the engagement process).

Thank you for your willingness to engage on matters of importance and for sharing your opinions, both positive and negative. We do listen to your feedback and will continue to do so.