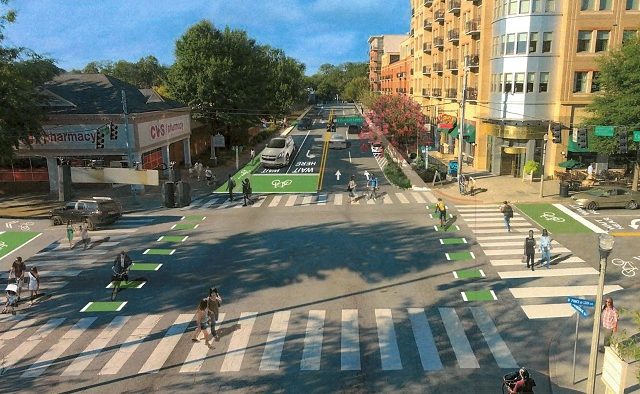 A rendering of the cycle track. Photo obtained via the city of Decatur.
Share

Construction on the Commerce Drive cycle track – a project to bring more bicycle lanes to downtown Decatur – will begin next week on Monday, April 22, according to a news update from the city of Decatur.

Construction will start at Clairemont Avenue and move south towards West Trinity Place, the city said. The initial work will include re-striping the street to reflect the new cycle track pavement marking plan and will provide work zones on both sides of Commerce and Trinity so that the contractor can safely perform the job.

More details about the project can be found here.

Construction will take up to one year. Lewallen Construction of Marietta, who has built similar projects in downtown Atlanta and at Georgia Tech, is the general contractor, the city said.

Efforts will be taken to minimize impacts, but residents should keep in mind that noise, mess, and inconvenience are likely side effects to be expected at various points during the process.