Flicks With Nicki – ‘The Best of Enemies’

Flicks With Nicki – ‘The Best of Enemies’ 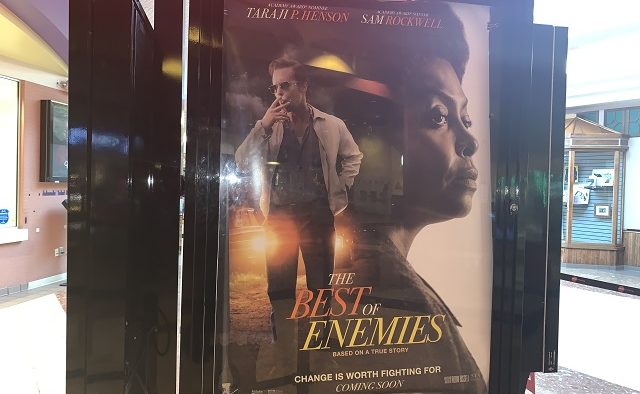 I avoid movies about race relations whenever possible. I don’t care if I’m stuck on a plane or if it’s streaming free somewhere. They usually fall into the broad categories: slavery, civil rights, unlikely friendships, sassy Black friend, white savior, and the Black nanny. Each year we get a dose of these morality plays with well-meaning themes. I don’t want to see them.

Based on a true story, “The Best of Enemies” shows us Durham, North Carolina in 1971 and the rivalry between Ann Atwater (Taraji P. Henson) and Claiborne Paul “C.P.” Ellis (Sam Rockwell) on the issue of school integration. C.P. isn’t just a white adversary, but a white Klansman. And he isn’t just a Klansman, but a Klan leader.

Bring out the popcorn.

After a Black elementary school burns down, Ann wants the city council to move forward with desegregation. Even with the help of the N.A.A.C.P., it’s evident that the all-white, all-male city council will not support this request. Ann is super loud and super belligerent. If I could give her a superhero name, I’d call her Super Black. She asks for radical things like decent housing and education. Ann is the backbone of her community, but strangely we never see that community on film.

The entire movie is focused on C.P.

He is calm and quiet. He has a family. He runs his business. He leads a Klan meeting. When we see the inner working of the secret society, we don’t see rage and hatred. Filtered through C.P.’s eyes, we see a brotherhood. Racism is just a byproduct of the fraternity. “Protecting our own” is what he wants. Even if it means shooting up the house of a white girl with a Black boyfriend.

C.P.’s family includes a wife (Anne Heche), some ignored children, and a child with special needs who lives in an institution. C.P. is the character we need to see humanized. He is the one who must grow and change. He is forced to do so when he is asked to co-chair a community discussion that will ultimately decide the fate of these issues.

Ann will be the one to change him. Shall we call this a Black Savior movie? I’ll have to add that my list of categories.

I could be critical of “The Best of Enemies.” The filmmakers forgot to do many things. Why is Ann two-dimensional? How can we sympathize with C.P.’s wife when she is shown to be so complicit in her silence? What happened to Durham’s public schools after integration? How many private schools started as a reaction to desegregation? Not just in the South, but everywhere in America?

On the other hand, the film attempts to bring nuances to the conversation about race.

Ann is center stage, but she isn’t the only voice for Black people. She is a grassroots activist in her community. Bill Riddick (Babou Ceesay) leads the community discussion. He is an educated Black man who must be moderate for the sake of his occupation that demands participants both talk and listen. Novel concepts both then and now.

It was nice to see a portrayal of the different voices in the conversation. Black power, poor folks, N.A.A.C.P., and even the church. There isn’t one Black story. “The Best of Enemies” gave us, though brief, a glimpse of this truth.

Same with the white voices. We see the Klan, the separatist elite, white moderates, veterans, and liberals. I appreciated the acknowledgement that not every white person in the South is an indifferent racist just waiting to use the N-word.

Movies about race dwell in the black and white, but rarely the in between. This story shows the ability of white people to hurt and silence each other. I had to wonder if “The Best of Enemies” was even a movie about race at all. It’s always about fear.

Sam Rockwell is a favorite actor of mine. I loved his performance in “Three Billboards Outside Ebbing, Missouri,” but I hope “The Best of Enemies” is his last broken white guy role for a while. He did what he could with a script that was not evocative.

Taraji P. Henson uses her likableness to her advantage, even though Ann Atwater’s character lacked any depth. She had her pity for C.P. and anger at injustice. Not enough for an Oscar, but good enough for a rainy afternoon at the movies.

I remember how much I loved “Driving Miss Daisy” when I first saw it. I wonder if I would still like it as much if I watched it today. There’s a powerful final scene with Hoke and Daisy that could have been echoed with Ann and C.P. Especially since it’s a true story about a true friendship, a little emotional resonance at the end would’ve been nice. If you want to see me ugly cry, just say: “Hoke, you’re my best friend.”

I’m not even mad at this movie. Most of the lost points were for not giving us something new. Most of the positive points were for great acting all around. Even the supporting characters give it their all. I’m not just saying that because my niece (Rae Jordan) was in the movie with her face as big as day on the movie screen, and her name in the credits. It was pretty good. “The Best of Enemies” gets a C+ for showing us not just the black and white, but a hint of the gray.